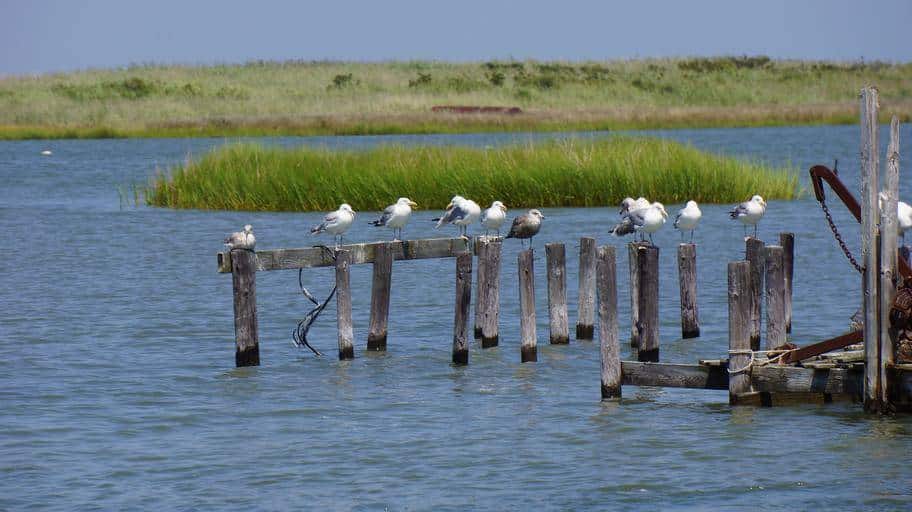 The Virginia Birding and Wildlife Trail is a driving trail with loops off the main trail, linking some of Virginia’s best wildlife-watching areas with walking and biking trails.

The trail is the first statewide program of its kind in the United States.

P.S. If you’re keen on hiking, then make sure to check out the sections of the Appalachian Trail in Virginia.

This area features 18 loops. This area extends from the Great Falls Loop just west of the nation’s capital to the South Chesapeake Loop.

The Eastern Shore of Virginia National Wildlife Refuge is a premier birding and wildlife site. The 1200-acre refuge provides viewing access to significant expanses of salt marsh, grasslands, loblolly pine forests, bayberry thickets, barrier islands, and freshwater and brackish ponds. The refuge has a bird list that comes close to 300 species. The Virginia Living Museum is home to 200 different species of native wildlife. Visitors can get up close to photograph and view wildlife in the wild or in the museum’s exhibits. See the bald eagle, bobcat, cedar waxwing, eastern screech owl, hooded merganser, otter, and beaver, to name a few. The Museum’s natural habitat attracts warblers, woodland birds, waterfowl, osprey, and even more species according to the season.

Along the Star City Loop, Mill Mountain Park and Star Trail rises 800 feet above the City of Roanoke. Nature enthusiasts and wildlife-watchers would probably find most interest in hiking the Star Trail. This 1.7-mile trail traverses from the Roanoke River to Roanoke’s highest point- the summit of Mill Mountain. See spring and fall migratory warblers and nesting migrants, such as bay-breasted Blackburnian prairie warblers, wood thrush, ovenbird, black-and-white warbler, white-eyed and red-eyed vireos, and indigo bunting.

James River State Park with numerous trails along the river through a series of extensive wetlands. Search the overgrown meadows for indigo buntings, yellow throats, house wrens, widow skimmer and common whitetail dragonflies. As you wander the trails, be sure to watch overhead for a migrating monarch or a bald eagle, briefly joining the red-shoulder or red-tailed hawks and northern harriers overhead.

Located in the Green Springs Loop is Lake Anna State Park, here you can see bald eagles cruising the banks and hunting along inaccessible reaches of the lake. In the winter months waterfowl can be seen offshore with flocks of ring-necked duck, redhead and greater and lesser scaups diving; and the occasional flock of tundra swans floats bye.

During migration, flocks of warblers can be found along with the titmice and chickadees. Also watch for black-throated green, chestnut-sided, bay-breasted, palm, prairie and pine warblers.

Bear Creek Lake State Park located in the Heart of Piedmont Loop has an extensive network of trails providing numerous opportunities to explore nature and watch wildlife. The lake itself is a magnet for wildlife with dozens of eastern painted turtles.

In winter an assortment of ducks can be found, in addition to the more regular wood ducks that nest nearby, during migration look for large flocks of American robins and northern cardinals. Other species to look for in the area include hairy woodpeckers and white-breasted nuthatches.

The Virginia birding and wildlife trail is an extremely exciting series of trails for keen birders and nature enthusiasts.

Tips for birdwatching in Costa Rica