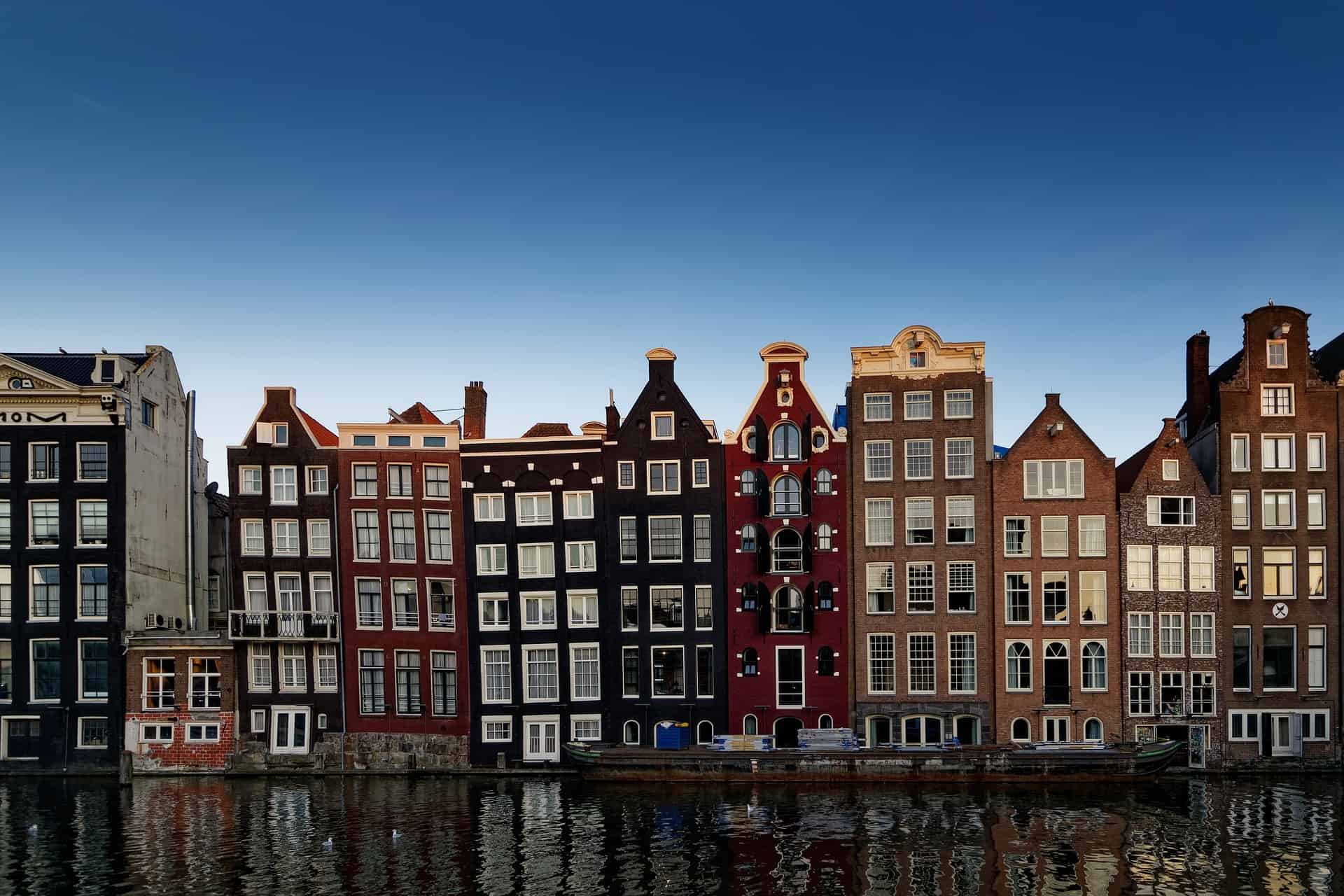 We thoroughly enjoyed our weekend in Amsterdam, finally putting an end to our raising curiosity of the city.

As soon as we got there, we hired bikes and enjoyed visiting the city by riding them! Amsterdam is best known as the cycling capital of the world so there is no better way than exploring this Dutch capital than these. You can go way farther on these fixies than on a tram.

There are 881,000 bicycles in the city, which constitutes about 58% of people who cycle daily.

A Weekend in Amsterdam: Places to see

We had heard a lot about the Red light district before going there. The single room brothels, prostitutes waiting for their customers dressed in minimal clothes, beautiful coffee shops, and liberated laws relating to prostitution and cannabis sounded fascinating to me. Apparently, the Red Light District tour Amsterdam was on the top of our list.

When we enquired we got to know that there are some guided tours that take visitors to the Red Light District during the night, which is probably the best time to visit the area. Some tours include one of the most exciting Dutch coffee shops and the sex museum as well.

The cabins of the prostitutes were tastefully decorated and illuminated with red lights. Their scanty clothes and the suitable makeover was alluring. Apart from this we pretty much liked the idea of sipping coffee beside a beautiful canal.

Next on the itinerary was a notable museum, the Anne Frank House. The story of a teenager who had to spend two years of her life in the hideout was terrifying, but worth paying a visit. So we decided to take a private Anne Frank House Tour to learn about the story indepth and get an insight into how they lived, fed, and were betrayed at the secret annex in Prinsengracht during the holocaust.

Anne Frank, the famous diarist and seven other members were forced into a hiding place during the Nazi’s persecution. Her father ran an office at the Prinsengracht, which ultimately served the purpose of their hiding. They entered into the secret annex via a movable bookcase. The office staff used to feed them with the daily news of the outside world and food to keep them alive. After two years, the hideout was betrayed and eight of them were relocated to various concentration camps.

The time taken to walk through the suburb of Amsterdam was two hours along with our guide. It was an extremely informative tour and we returned highly enriched with almost all the details of the life of the famous diarist. The Anne Frank House Tour took us to visit this German- Jewish girl’s first school, family home, and the shop where she bought her diary.

Our first day in Amsterdam

The very first day we visited the Anne Frank House, the cheese museum, the tulip museum and the West church, which are all located within the 0.1 to 0.3 km from Anne Frank House. We ended the day on a raunchy note by visiting De Wallen, the red light district of Amsterdam. We were left with one day and we surely wanted to get most out of it and no one else could make it possible other than the guided Amsterdam Tours.

We kicked off the day with a healthy breakfast at an affordable restaurant and then moved forward with the city excursion.

Our weekend in Amsterdam was a most memorable one. We were taken aback by the breath-taking scenic beauty of this place. We thoroughly loved this trip and would want to visit this amazing city over and again.

Lastly, we would strongly recommend this city if you are looking forward to a holiday somewhere in Europe. There are many incredible things to do in Amsterdam.

If you’re spending more than a weekend in Amsterdam, we recommend joining in on one of the below activities or even take one of the day trips from Amsterdam.

We have drawn up a list of what we think are the best holiday activities the city has to offer – see if you can check of everything on our Amsterdam bucket list!

Lets get some culture in here somewhere – after all Amsterdam does have more museums per square mile than any other city in Europe.  The beauty of this is that there is certain to be one that interests you, from the Rijksmuseum and the Van Gogh Museum to the (fairly bizarre) spectacle museum, museum of bags and purses and Ripley’s Believe It or Not!.

Cycling is a huge part of the Amsterdam way of life, and a bike tour is the best way to get a sense of the city.  A good one lasts between 3 and 4 hours (there’s a lot to see after all), and is a great place to pick up local tips and ideas for other things to do.  If you want to do something truly unique, get a beer & bubbly bike tour – be warned, these can be fairly exhausting.

Amsterdam’s canals are a huge part of its heritage and history, besides being stunningly beautiful.  Canal cruises come in all shapes and sizes, and are a great way to see the city from a new perspective.

The Amsterdam Bar Crawl is something of an institution.  Several companies run an Amsterdam Bar Crawl, so there is a great selection to choose from.  They operate in several different areas of the city, and the good thing about them is that they are an excellent way to meet other visitors to the city.

Amsterdam Bar Crawl companies bring together big groups that then move as a unit from bar to bar, sometimes with up to one hundred people.  This is a great way to meet people and then not immediately lose them when you move on to the next place.

Amsterdam is famous for its fine cheese, and there are a lot of places in the city that offer special cheese tasting services.  These normally don’t cost too much, and are a really great way to learn something interesting about the local produce. The Dutch eat cheese virtually continuously, so it’s a nice way to get a sense of how the locals live too.

Ahhhh the amber nectar.  The Dutch are serious about beer.  Recovering from almost a century of what frankly amounted to the tyranny of the Heineken Brewing Company, the craft beer scene in Amsterdam is in the process of really getting on its feet.

This is an exciting time for Dutch beer, and there are some independent breweries in Amsterdam that are truly inimitable.  If you’re interested then do not miss a trip to De Bekeerde Suster, where you can get a taste of a more old school selection of Dutch beers that survived the Heineken years.

To help you find a little bit of both, though, here are four places that you absolutely need to go and see in Amsterdam when you are here.

Then, you can get a taste of its connection to cannabis and it’s taste to life and culture.

The Amsterdam ArenA is, as far as sporting venues is concerned, one of the most fantastic in Europe. Its outstanding design makes it easy to enter and see around, it’s simple to find your seats and the atmosphere is typically electric.

Home to AFC Ajax, the local team and one of the most famous sides in the world, Amsterdam is a city with a proud sporting history. This was the sight of many famous sporting victories, and coming here today will let you sample one of the most exciting young teams in European football. Not a football fan? This stadium is sometimes used as a venue for concerts as well. You can do a 70-minute tour of the arena.

This wonderful museum is located in De Wallen (the Red Light District) and is one of the best places to come if you want a detailed introduction to the history of marijuana in this fine city. With more than two million visitors since 1985, this is an important place to come if you want to see a rich and detailed history of how the city became synonymous with green.

With a live cannabis garden showing the stages of growth as well as pipes and stunning artworks, this is a fantastic place to see the rich position that the drug holds in this city. And if you’re looking for a fun souvenir: The museum gift shop sells cannabis seeds from the brand Weed Seed Shop!

A monument to a true legend of the Dutch, the Van Gogh Museum is one of the most exciting places in the city to come and visit. It’s got a fantastic range of works dedicated to the mastermind himself, as well as his contemporaries. It stands as one of the finest displays of artwork in the city, and makes a fine place to come whether you are intrigued by the artwork, the history or just the man himself.

Whatever you decide, you will find that the Van Gogh museum make a fine break into the city’s artistic traditions. And, if you’re into architecture: The “Stedelijk Museum” (“Museum of the City”) is right next door and it’s a stunning building.

Hint: Buy your tickets before to skip the line!

A stunning public urban park that spans more than 47 hectares, the Vondelpark (named after the Dutch poet Joost van den Vondel) is a part of Amsterdam that shows you just how close this city is to the nature around it. Shows off a stunning part of the city that breaks away from the bustling nature of the city centre, whilst offering a classy place to come and visit for a little comfort and tranquillity.

As a city, Amsterdam finds fine ways to remind us that it’s more than a place for stoners. Art, sport, culture, nightlife and style – Amsterdam is a city with more to it than marijuana. That, however, does not mean it’s not worth coming here to see!

Get the I Am Amsterdam City Card to free or discounted access to loads of museums and activities, as well as access to the public transport. You can get cards valid for 24, 48, 72 or 96 hours which are great to get for quick visits to this amazing city.

Hiking in Innsbruck: The Nordkette

Free Walking Tour – What to Do in Berlin in Winter