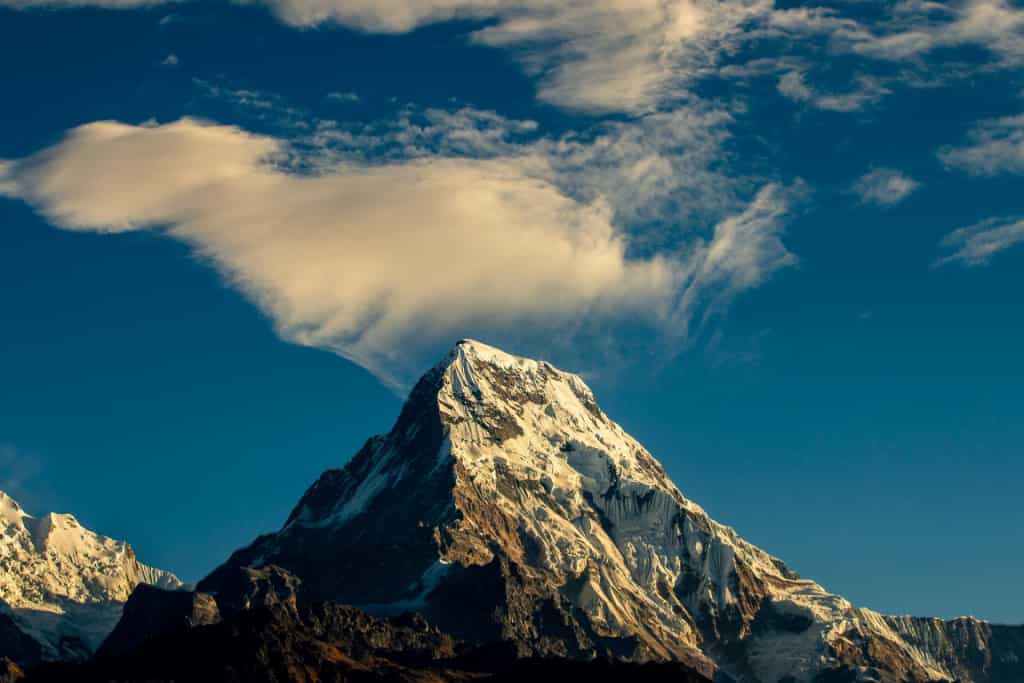 The Annapurna Base Camp Trek is one of the most mainstream treks in Nepal.

It is moderately simple and shorter while still including a variety of landscapes, culture and untamed life alongside the most astounding and close up perspective of the Annapurna run, Machhapuchhre, Hiunchuli and Dhaulagiri.

Annapurna Base Camp trek, also called an Annapurna Sanctuary Trek, gives an extraordinary variety of ecosystems because of the unique combination of depths and height. It is surrounded by the snow giants, especially Annapurna Himalayan ranges and other peaks above the 7000 meter mark. So, it receives only 7 hours sunlight a day in summer season.

A dense tropical forest of bamboo and Rhododendron covered the south facing slopes and the north facing slopes are covered by rain shadow. The sanctuary is considered sacred by both Hindus and Buddhists as it is believed to be the abode of their deities. Annapurna sanctuary was not opened for foreigners until 1956.

It is the most beautiful Nepal trek exploring the diverse ethnic groups and their cultures such as Gurung, Magar, Thakali and glimpse of flora and fauna.

There are many trekking tours that you can join for this circuit trek, including this one.

You can also see some spectacular mountain views while on the trek, including:

Details of the Annapurna Base Camp Trek

Highlights of the Trek

Highlights of the trek incorporate all-encompassing perspectives of mountain ranges and pinnacles, spellbinding dawns and dusks, terraced farmlands, sufficient time to visit towns inhabited by people of varying ethnicity and a chance to witness the Himalayan way of life.

The trek begins after a couple of hours drive from Pokhara. The course climbs through towns occupied by people of varying ethnicity, commonly the Gurung and Pun community. The trek will enable you to meet Nepali individuals going about their daily life. The settlements, farmlands and backwoods are connected to one another by paths but the settlements are more scarce at higher altitudes.

Annapurna Base Camp Trek covers Ghorepani Poonhill Trek also. In springtime, the woods around this territory are filled with flowering rhododendron. Poonhill offers breathtaking perspectives of the mountains in the Annapurna run, providing you with a small taster of the magnificence that is to come.

Browsing through Annapurna photographs, will give you an idea of what you can expect during the excursion. What’s more, since, Machhapuchre Base Camp lies on the way Annapurna Base Camp, you will likewise achieve the base of Mount Fishtail near Pokhara.

Flora and Fauna Seen on the Trek

The locale is home to various creatures like obfuscated panthers, Himalayan Tahr, Himalayan Giant Honeybee, Pheasants and so forth.

In spring, it exhibits numerous wonderful blossoms including the national bloom of Nepal ­­­­– Rhododendron. Orchids, Machhapuchhre massif and the most profound chasm Kali Gandaki stays with you amid the trek.

Various Vantage Points Along the Trek

You will spot at times steep, cascading waterfalls. Also, you will get the chance to find out about individuals of various ethnicity, particularly the Gurung People when going to Gurung Museum in Ghandruk.

Contingent upon which course you take, you may not go through Ghandruk, however. The trail is same from Chomrung onwards yet you can incorporate or exclude Ghorepani Poon Hill and Ghandruk.

Poon slope is a vantage point for the perspective of Annapurna in addition to different pinnacles and for dawn and dusk.

Different features of this trek are the hot springs! Extremely unwinding and recuperating for your throbbing muscles. Additionally, ABC goes through MBC (Machhapuchhre Base Camp). Visit two base camps in a single outing!

Together with the Annapurna Circuit, these trails see around 70% of the aggregate trekkers going to Nepal.

Best Time to Do the Annapurna Base Camp Trek

The Annapurna Base Camp Trek should really be possible throughout the year.

Notwithstanding, being caught in a storm is a menace. Rain for the most part descends during the night however, the dull mists are ever present. This implies a terrible to no perspective of the wonderful pinnacles.

Rain likewise implies leeches, mosquitoes and conceivable avalanches. However, this is the time when creatures are generally dynamic. On the off chance that you are an avid researcher, perhaps the rain season is for you.

Initially, here are the seasons. In Nepal, there are six seasons:

You could go during December on the off chance that you might want it to be less crowded. ABC should be possible in winter also. You will have dry air and clear sky During winter, bit it will be exceptionally icy and will snowy.

Beginning from January, you should be watchful about torrential slides when making a trip from Deurali to Machhapuchhre Base Camp. This extent is inclined to torrential landslides. Trekkers ought to be cautious regardless of what time of year they are trekking while trekking from Deurali to MBC.

Spring is another good time to do the Annapurna Base Camp trek. Watch out for the torrential slides however. Tune in to local people for the news about the torrential slides ahead. In spring, the trail will be canvassed in red and white rhododendrons and numerous other extraordinary blossoms found in this district, a great time to go for botanists.

What to expect on the trek

The trek typically starts in the village of BhuleBhule.

Buses will get you from Kathmandu to Besishar in a drive that is quite spectacular in itself for the Middle Hills scenery you pass through and the narrow, windy road. From Besisahar to BhuleBhule you will have to take a jeep or an even older local bus. Tourist and local buses are available.

But don’t let the “tourist” label fool you.

Chances are good you’d be the only Westerner on the tourist bus, since they are also popular with the locals who can afford them. They tend to be more comfortable (though it’s still a jolting ride), and faster. Local buses take much longer, are much less comfortable, carry very few tourists, but are cheaper, if you’re pinching pennies. The ride on a tourist bus takes five or six hours.

Though not required, porters and/or guides can be easily hired in Pokhara or Kathmandu at many travel agencies. As a classic “tea-house trek,” which goes from village to village and does not require trekkers to bring along food or camping equipment, porters and guides are far from necessary, though many trekkers still like to use them.

If you do hire a porter or a guide, Nepali tourism officials ask that you make sure you pay a fair wage, limit the weight you require them to carry, and ensure they are properly clothed. Pay attention to their health when you get up in elevation, since some porters may not tell you if they feel ill. Altitude sickness is potentially fatal if ignored.

Depending on where you end your trek, buses and taxis are available to take you to Pokhara, a great place on a lake to spend a few days unwinding and relaxing. Kathmandu is about a six hour bus ride from Pokhara, easily arranged once you’re ready to leave the lakeside town.

You can try and walk the lower stages at a faster pace maybe combining two of them into one so that more time can be spent on acclimatization on the higher stages. For example a couple of extra days can be spent at Manang and utilized by climbing to one of the many peaks around it and coming back down so as to increase the production of red blood cells. You can also see the origin of the Marsyandi river in Manang.

The best part about this trek is the varied scenery it has to offer. You start from tropical forest in Besisahar, see terminal moraine near Manang and then move past the snow line across the Thorung La and then to the barren landscape of lower Mustang and Muktinath.