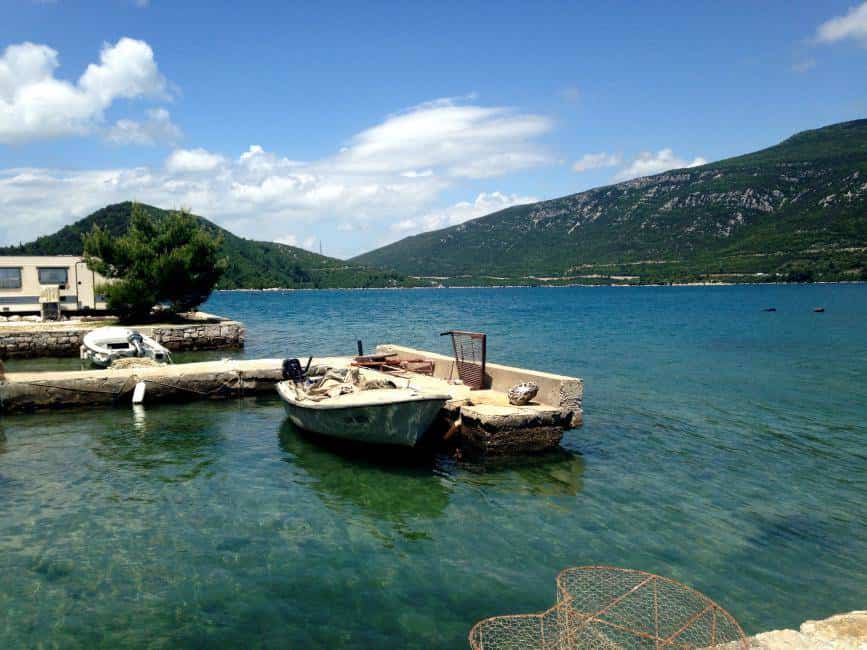 If you’ve ever been to the Dalmatian Coast of Croatia, you most likely quickly tired of the repetitive menus boasting the same 10 or so dishes regardless of what town you’re in.

Even when the quality is high (unfortunately it’s often simply average) there aren’t exactly a smorgasbord of flavors in Croatian dishes and eating out is expensive. (between $15-$30 per main dish at restaurants).

Street food and fast food in Croatia is literally non-existent (although there is much more variety when you get up to a big city like Zagreb which is more European and therefore multi-cultural) except for the odd pizza spot.

Lack of Variety in Dubrovnik

On my trip to Croatia in July, I found myself in the food doldrums by my 2nd day in Dubrovnik. After about 2-3 meals of bland overpriced seafood risotto or grilled calamari or white fish with french fries (always nice, just not cheap by any means), I did find one more interesting meal at a Bosnian place called Taj Mahal (bbq’d kebabs of meat with nice sides of yogurt – still about $20-$25 per plate) but that was as exciting as it was going to get.

Hoping to find a magical streak of more interesting Croatian restaurants outside the center of Dubrovnik, I asked local business owner, Goren, of Stella’s restaurant, his suggestions on where to find higher quality restaurant with better prices. His answer was, quite simply that I was not going to find this in Dubrovnik or in any coastal town. He told me the price of dining out (and the lack of selection) is a big reason why Croatians rarely go out to eat.

A Treat for Seafood Lovers

BUT, he said, if you love oysters and seafood ‘I have a place you should definitely check out.’ (Goren lived in LA for a few years about a decade ago and therefore speaks great English and loves Californians…).  It’s called Ston, and is about a 30 minute drive from Dubrovnik. It’s known for it’s fantastic oysters, which get pulled right out of the bay there for your lunch.’

Turns out there are two sides to Ston and the part where all the better food is is called Mali-Ston (according to Goren-but we heard the same info from most ppl). Goren offered to take us out to Ston the next day, his day off, so he could take us to a restaurant that we wouldn’t be able to find on our own.

Like a restaurant with no advertisements or sign and no restaurant name…. so basically someone’s house in which they cook seafood they’ve just pulled right out of the water, in their small one four burner stove kitchen, and serve it on the back porch overlooking the water.

An unnamed restaurant off the beaten path? You bet! I’m always up for an adventure that benefits my palate. I was in..

The next day Goren picked my friend and I up and took us out to Ston.  It was about a 30 minute drive from Dubrovnik up towards the Pljet Peninsula.

We would never have found this place on our own. Goren doesn’t even know the name of the ‘restaurant’ he just knows the names of the owners, his friends (I have a feeling it’s not actually a restaurant but that they do meals for tourists when possible, for some extra money).

The Best Meal in Croatia

What followed was the best meal I had during my three week trip in Croatia (other than the meals I cooked at our airbnb apartments). We enjoyed seven courses of fresh seafood pulled right out of the water minutes before it was served to us (each course was between 30 minutes to one hour apart since these were two people with one tiny stove shelling and cleaning and cooking all of our food).

The fish butter herb soup, fresh clams, mussels, oysters and squid, and black squid ink risotto (with more ink than I’ve ever had in a squid ink risotto dish) more than made up for the undrinkable wine (much of the wine you’ll get on islands in Croatia is really bad. The exception is generally wine from the Istrian peninsula).

After this meal, we were never impressed again by a seafood dish in Croatia in comparison with the quality we enjoyed during this four hour lunch in Ston. To top it off our bill per person was about $35 for the seven course meal. In Dubrovnik we would have paid this for one entree.

More to Ston Than Food

An added benefit to our visiting Ston was finding a very cool old ancient wall and stairway on the way to the restaurant.  On the way back from lunch we got out and went to explore and climb the stairs, which offered views of the whole area (you can see the wall and stairs in some of the photos attached here). Not to mention an old salt field where we learned about the salt production that used to happen in the area (apparently there was a time that salt was more valuable than gold!)

While the eating and drinking  can be quite expensive in Croatia, lodging can be found for very cheaply if you use Airbnb instead of booking hotels. We paid between $45 and $60/night (and split the cost) for apartments with two beds, and often two bedrooms which really helped off-set the costs of the overpriced dining out and wine.

How to Order Coffee in Greece