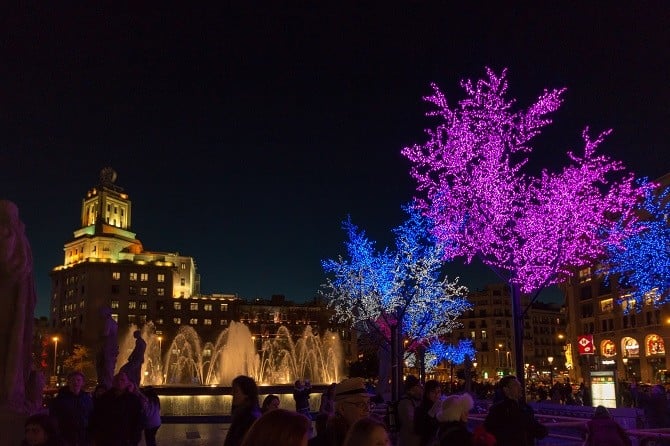 Christmas is celebrated in its own unique way all across the world, with countless different traditions and cultures celebrating the festive season in its own special way.

Christmas and new year are one of the best times of year to visit Barcelona. From fireworks to Christmas markets, there is always something to get up to in Barcelona.

The Catalan capital knows how to get into the festive spirit, as there is a wealth of things to do this Christmas and New Year in Barcelona.

See also: Celebrating Christmas in Barcelona Like a Local

This year more than ever, we will have to say goodbye from our own homes, instead of at house parties or at the club until the early hours. But not to fear! There are still things on to get up to, and to get into the festive spirit.

The Market of Saint Lucia is Barcelona’s oldest Christmas market and dates back to the 18th century, taking place in the plaza in the front of Barcelona Cathedral. 2020 is the 234th anniversary of the Fira de Santa Llucia, and it will be open from the 27th of November until the 23rd of December. Here you will find stalls of handmade gifts, figures for nativity scenes, Christmas decorations, crafts, and much more!

The traditional Three Kings Parade, which takes place on the 5th of January, is usually a large tour of the city where crowds will come out to watch the Kings and their entourage pass through the streets.

The tradition of the Three Kings in Spain is when the three wise men, Melchor, Gaspar and Baltasar, accompanied by their entourage of fantastic creatures and royal mailmen, come to collect the letters from the children of their Christmas gift wishes. Children will be able to give their letters to the royal pages and experience the magic of the Three Kings at the Parque del Fòrum where there will be 10,000m2 construction that recreates the traditional floats and the Three Kings. There will also be the costumes, tools, a space to send and receive gifts, as well as a post office and box to send the letters to the Kings of the East.

This year, the Barcelona council are putting on a firework display that will be able to be seen from all over the city. It will last for 15 minutes, so that the New Year can be brought in with a bang, and all from the safety of your own home so that there is no risk of crowds forming.

The fireworks will be initiated by 12 chimes, to mark the end of December 31st, and 12 bright palm trees will be launched in each of the ten districts of Barcelona: Ciutat Vella, L’Eixample, Sants-Montjuïc, Les Corts, Sarrià-Sant Gervasi, Horta-Guinardó, Nou Barris, Sant Andreu and Sant Martí.

If you’ve never seen this festive Catalan character around Christmastime before, we’ll forgive you for thinking we’re joking when we explain this…

The star of every household in Catalonia is the ‘Caga Tió’ meaning ‘Poo Log’, and it is a small, wooden log painted with a big smiley face, dressed in the traditional red Catalan hat.

It is brought out on the Feast of the Immaculate Conception on December 8th, and the children ‘look after’ it until Christmas Eve, by wrapping it in blankets and feeding it Torró every evening. The idea is that by caring for him and making him full, he will then be able to ‘poo out’ their presents on Christmas Eve! No really…

After eating their main meal on Christmas Eve, the children start to hit Caga Tió with sticks while singing a special song to encourage it to give them their presents. Once the song has finished, they remove the blanket to find all of their Christmas presents underneath!

Caganer of the Nativity Scene

It is common in every household in Catalonia to have the nativity scene as a decoration up in the house, but there’s a peculiar addition in Catalonia to the scene that you will surely never have seen before…

The Caganer is an essential part of the Catalan pessebre (Nativity Scene), a peasant dressed in the typical Catalan red cap and is found hidden somewhere in the scene with his pants down, pooping in the stable!

This tradition is believed to have begun in the late 17th to early 18th century, and the Caganer’s poop was said to fertilize the earth and bring good luck for the new year. Nowadays it is more of a satirical joke for Catalans to include the Caganer in the Christmas scene, and the figurine is sold on the Christmas markets with the faces of politicians and celebrities on for fun.

No matter where you may find yourself in Spain, the tradition on New Year’s Eve is to eat a grape with for each of the first 12 strikes of the clock at midnight on the 31st of December to welcome in the New Year.

It is said to lead to a year of good luck and prosperity, and in olden times was said to ward away witches and general evil, although the ‘magic’ of the grapes is treated more as an old wives’ tale, whereas nowadays its simply viewed as a cultural traditional to welcome in the new year with friends and family.

Why Is The St Andrews Martyrs’ Monument So Important?

Places To Visit Near The Shard In London