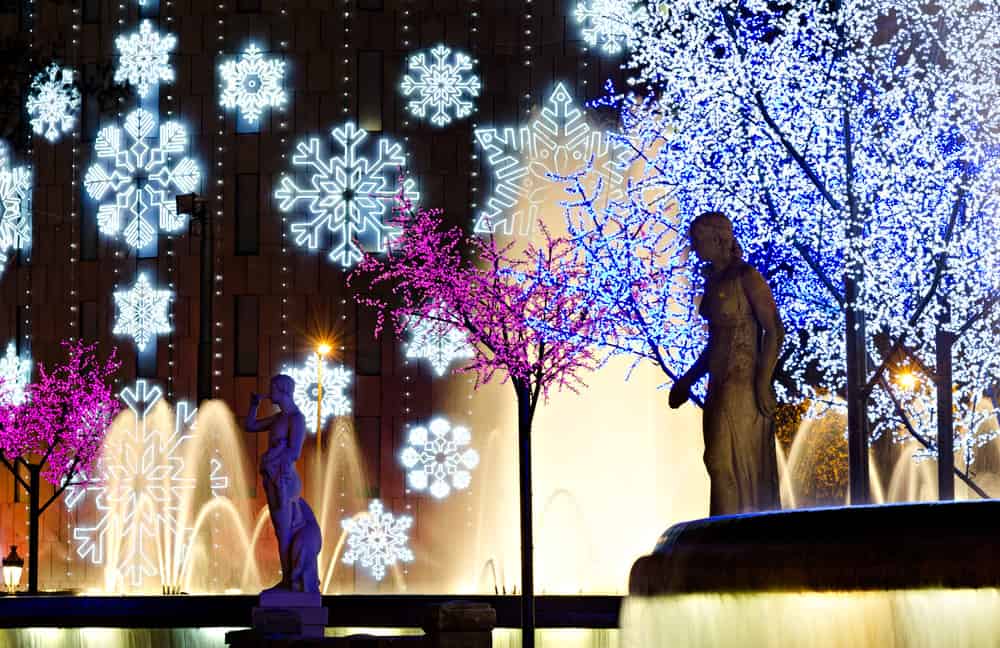 Thinking about spending Christmas in Barcelona? Keep reading for more on what to expect.

Winter in Barcelona descends from late November to early March, and it is considerably mild compared to other places, reaching lows of around 5℃. Basically, if you’re looking for somewhere to celebrate a white Christmas in Spain, Barcelona probably isn’t the place for you.

However, if you want to celebrate Christmas with blue skies, surrounded by carollers, inspiring religious buildings, and incredible Christmas markets, without feeling the need to shiver your way through it all, Barcelona is the place for you.

See also: Guide to Experiencing the Best of Christmas Around the World

A large part of spending Christmas in Barcelona is visiting the many Christmas markets.

This is one of the largest, most well- known and oldest markets in the city, this year will be its 235th edition, filling the area outside of the famous Gothic Cathedral with over 283 stalls selling everything from figurines to plants, to crafts and even Simbombes.

At this incredible market you must be sure to keep a look out for the cheeky ‘caganer’ figure, which is a traditional catalan figurine with his trousers down, he is said to bring luck by fertilising the earth.

This place dates all the way back to 1786, taking place on the day of Santa Llúcia, December 13th, this is a historic and exciting place for you to check out this winter!

These Christmas markets are slightly smaller than the Santa Llúcia markets, but they are positioned right outside the incredible Sagrada Familia, which you must visit if you haven’t before (it’s one of the top Barcelona attractions).

They have a little of everything here, but most importantly they serve incredible tasty christmas treats, such as roasted chestnuts, baked sweet potatoes and churros with thick hot chocolate!

This Christmas market in Barcelona surrounds the idea of the celebration of the three kings in Spain (don’t worry, this will be further explained shortly), the day in which the Spanish give out their main presents.

Stalls at the Fira de Reis sell mainly kid’s toys and presents, making it a pretty ideal place to go find a Reyes gift for everyone who you need to buy for.

Escudella is a traditional christmas warmer, a kind of stew which contains everything. It has chicken, beef, pork backbone, ham bone’s bouillon, veggies; carrots, potatoes, cabbage. It’s a pretty hypercaloric dish, but there’s nothing wrong with that when it’s cold outside!

The perfect dish to warm you up this winter.

Sopa de galets include huge pieces of pasta, with which one will fill your spoon. The galets are the large pieces of pasta which are filled with veggies or meats. The soup itself is a traditional soup made with bouillon, making it a very comforting cold winter dish.

This is usually eaten as a first course as part of Christmas day lunch, on the 25th of December.

Canelons, or Cannelloni, is one of Catalonia’s favourites, usually eaten on the day of Sant Esteve, celebrated on December 26th. This dish includes Cannelloni stuffed with either chicken or meat and bechamel sauce, the difference between this and your traditional Italian Cannelloni is that this dish does not use tomato sauce.

Turrón is one of the most well known Spanish Christmas foods that you will find in Barcelona, as well as being found in Italy and parts of South America. It dates back to the 16th century, and is enjoyed all over the Catalan capital during the holiday season. Turrón tastes almost similar to malteser chocolate, it is made with honey, sugar, egg white and toasted almonds or other nuts.

This chocolate is extremely tasty and can be found in just your average supermarket at any time during Christmas.

These sweet treats are super popular throughout Catalonia, you’ll find them everywhere!

Crema Catalana is pretty much the Catalan recipe for a Crème brûlée, first found in Catalan books in the 14th century. The recipe includes the use of custard cream, over which sugar is poured and burnt with a hot iron rod to create the trademark burnt crust.

This differs from your average Crème brûlée through both its cooking method & consistency, as well as its cinnamon and lemon zest flavour as opposed to your usual French vanilla.

Getting Your Christmas Shopping Done Right

Barcelona is home to some of the biggest shopping centres in Spain, and during Christmas there are a load of great sales and deals to get you in the Christmas mood. These places are also perfectly happy to wrap your gifts for you.

See also: Where to Find the Best Vintage Shops in Barcelona

A shopping centre split into three floors, to accommodate their 200 stores and 17 cinema screens, and even a bowling alley. This is one of the biggest in Barcelona, and is recognised as an environmental model due to their promoted values of environmental sustainability.

This is the perfect place for your Christmas shopping as everything is in one place, as well as this the shopping centre is just beside the Parc Diagonal Mar and Museu Blau, two very ideal locations for spending the day as a family.

The Glòries shopping mall is located in the Plaza de las Glorias Catalanes, surrounded by the incredible Torre Glòries (a huge skyscraper which changes colour day and night, it’s incredible!).

This place has 75 major stores, restaurants and cinemas, with plenty free parking, charging points, and they even have a kids club play area!

For shopping like a real local, why not go to a shopping centre that used to be a bullring! They have over six floors, 115 shops, a fitness centre, 12- screen cinema, events hall and several bars and restaurants. They even have a huge terrace in which you can get a 360° view over Montjuïc.

Celebrating the Three Kings like a Local in Barcelona

Towards the end of December most people around the world begin to relax and finalise their Christmas celebrations, however here in Spain, that is not the case. The first week of January is one of the most exciting times to visit Barcelona. People in Catalonia, in fact, will still be buying gifts and preparing their Christmas dinners, whilst you can still admire the beautiful Christmas lights across the city and prepare yourself for the arrival of The Three Kings or Los Reyes Magos.

These biblical characters come to Spain on the 5th and 6th of January to give gifts of presents and sweet treats to the children. On January 5th there is a parade dedicated to the three kings in which the Kings themselves arrive at the Av. Del Marquès de l’Argentera and travel 5km around the city, ending at the Montjuïc Magic Fountains.

For more tips on Barcelona, check out the below posts:

What to do in Antwerp: Take a World Trip

The Best Adrenaline Adventures in Catalonia