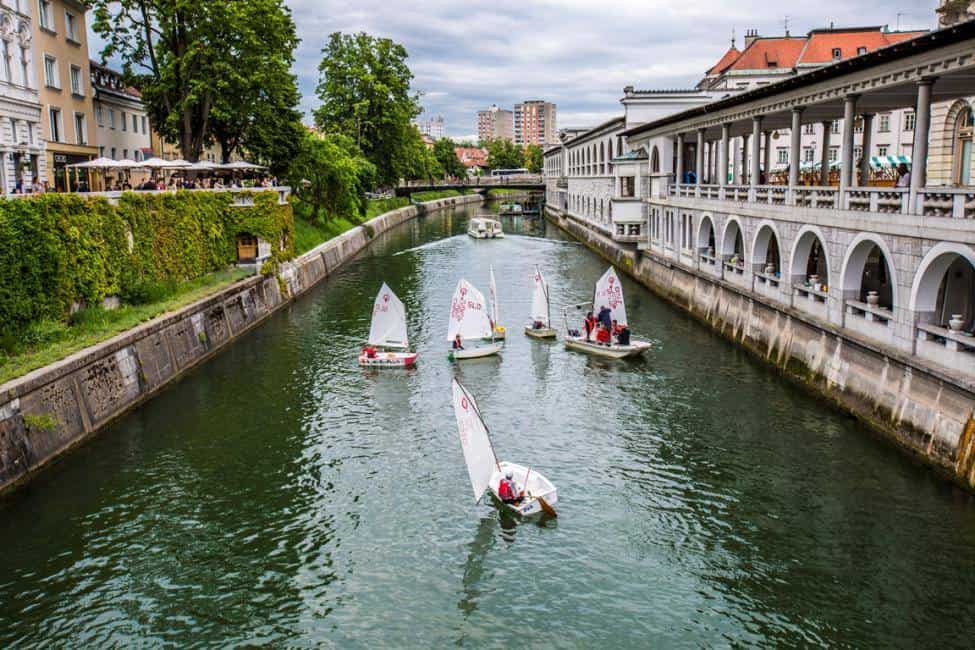 When I ask you to think about Ljubljana, Slovenia, what’s the first thing that comes to mind? (Besides the fact that you cannot pronounce it correctly).

I can recite what you likely already know about Ljubljana, like it is the capital of Slovenia and the largest city across the country, it’s situated along the Ljubljanica River and is well known for castle hill, Tivoli Park and the many museums that stand in the cities centre, but you already knew that.

Pumped to head onward to Ljubljana?

Perhaps that little city description hasn’t quite sold you. So, here’s what I want to share with you, 6 crazy cool things that you probably never knew about Ljubljana and that oddly made my experience one to never forget.

Unique things to know about Ljubljana

I certainly never travelled to Ljubljana for a milk machine, but this machine was amazing! Their automatic milk machine is located in the central fresh market and dispenses raw milk (unpasteurized, non-homogenized, antibiotic free milk). There were some Slovenian researchers who found it important to find a way to produce raw milk in order to avoid further damage of the blood vessel walls in the body.

Despite the machine being placed there in order to ensure local city dwellers were getting the right (and healthy) dose of milk they need everyday, the contraption itself is phenomenal. The machine can repel unwanted debris and bugs, self-disinfect after every use, continuously check the milk’s temperature and dispose milk that has been left for more than 24 hours. How does it work? Ljubljana locals can bring their own water bottles or purchase a bottle out of the vending machine next to the Mlekomat. You can then fill the bottle pay for the exact amount of milk dispensed. The best thing about it? It’s cheap!

It wasn’t just me who enjoyed the milk machine so much, other online publications have written about it here, here, here and here. Shall I go on?

Free Rides Around Ljubljana in an Electric Car

I kid you not, there are electric cars driving around the center of the city and taking travellers, locals, elderly, lazy and all of the above, around for free in their electric Kavalirs. Kavalir is another way of saying gentle helper, cool right?

Of course these electric vehicles are primarily used for visitors, elderly and mobile impaired citizens, but it’s free and open for anyone to use during hours of operation (8:00am – 8:00pm). At the moment, there are about four of them zipping through the city during all seasons and are willing to take you anywhere you need to go within the cities centre.

We have the local bus company, the city municipality and the Ljubljana Tourism Board to thank for this cool city experience as they’re working together to create a greener, more environmentally friendly city.

This is certainly one of the main things to know about Ljubljana that you didn’t know about! If there’s one thing Ljubljana knows best, it’s quickly finding alternative green solutions to unsustainable city practices. In 2008 they noticed an increased problem with waste management. The solution? The city of Ljubljana has installed underground collection points which replaced the usual unsightly waste bins with underground deposits separated for paper, plastics and glass.

You may have seen similar contraptions used in other cities across Europe, but the most unique part about their underground collection points is that there’s also a bin for organic and household waste that are free of charge and require a city waste card to unlock. Ljubljana has almost 50 set up across the city already and aren’t planning on stopping any time soon.

I arrived in Ljubljana, Slovenia with no intention of falling in love with their culinary scene. To be honest, I hadn’t heard much about Slovenian food before arriving, but their new and lively culinary scene is out of this world delicious. No matter where you’re spending your time in the city, there’s bound to be a number of small cafes, ice cream shops, gourmet burger joints and craft brewery stores all around you. The entire riverside is filled with delicious local and international cuisine and the best part about it – it’s cheap!

Ljubljana is quite new in the craft beer scene and you’ll find many of the cities’ bars selling Slovenian brewed beer. I even had the opportunity to hop on a beer tour around the city to explore some of the favorites: The Human Fish, Mali Grad, Bevog, etc.

If you’re looking for local cuisine and traditional Slovenian food, there’s certainly no lack of amazing restaurants in the area. If you want a taste of it all, checking out a food tour similar to the one I checked out in Ljubljana, is definitely worth it! Don’t forget to try the potica rolls, pumpkin seed oil (on top of just about everything), local honey (and honey liqueur), traditional fried onions and mashed potatoes and the Carniolan sausage!

Just because Ljubljana is the largest city in Slovenia certainly doesn’t make it a concrete jungle. It is without a doubt one of the greenest cities I’ve ever visited, if you don’t believe me, take a look at our recap video from Ljubljana.

There’s a reason why Ljubljana, Slovenia was voted the European Green Capital of 2016. There are many green highlights around the city including the Park Spica, Tivoli Park, Ljubljana Botanic Garden and the Central Market. There are also tons of opportunities to join in on green tours around the city by bicycle, kayak and stand up paddle boards (SUP). Take your pick!

And, if that’s not enough, there are plenty of day trips from Ljubljana. Check out our video below:

Does this even need further explanation? I was on a bike tour the same day I saw the Cat Cafe Ljubljana (Adress: Hrenova ulica 19, 1000 Ljubljana) for the first time and had insisted that we take a peek inside.

It was definitely a cat lover’s paradise.

There were adorable cats relaxing in the sun and local people kicking back sipping a cup of coffee or reading a book alongside a furry friend. The cafe has an entire cat park built into the wall with parts of the course exiting through the wall to the outside of the building and back in. While it’s not something that can be easily explained in words, it’s definitely worth checking out while visiting Ljubljana!

What about you? Have you ever explored Ljubljana and found crazy cool things that you never thought existed around the city before?

The #Ljubljana trip was created and managed in association with the Ljubljana Tourism Board. Travel Dudes maintains full editorial control of the content published on this site.

Cheapest Bars in Barcelona to Drink on a Budget

The Most Unusual Museums in Barcelona

Best Destinations for Surfing Holidays Around the World