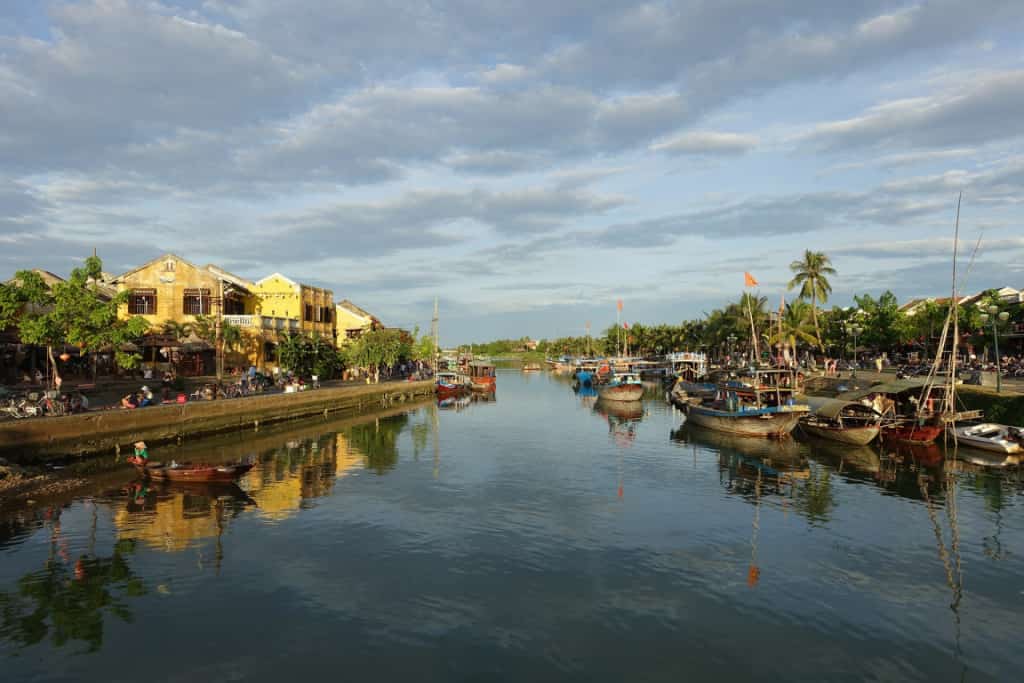 Known as the 3rd largest city in Vietnam, Da Nang is quickly making its way to the top of every tourist’s travel list. From its bustling city streets to its quaint tropical beaches and numerous culinary delights, it’s obvious that these Da Nang attractions are not only bountiful but fundamentally life-changing and the proof is in its picturesque attractions.

Tourists are instantly treated to the deep blue waters of Khe Beach that is adored for its calm waters and pristine sand. For those looking to increase their heart rates the spectacular views from the Marble Mountains will titillate those with a passion for the great outdoors. Travellers looking for a cultural escape are encouraged to explore one of the city’s oldest boulevards, Tran Phu street or take a walk through the ancient temples and Danang Cathedral for a unique cultural experience.

Fully immersing yourself in this diverse coastal city centre will shock and delight all five of your senses … leaving you wanting more of the numerous Da Nang attractions on offer.

If we are discussing popular attractions in Da Nang we cannot leave the Hai Van Pass off of our list. This is a 21km road which zig zags through the mountains to link Danang with Lang Co offering you exquisite panoramic views of the city centre. The pass is renowned for its natural scenery, aesthetically lush mountain ranges and epic views. Better yet, the Hai Van Pass was even featured on BBC’S Top Gear!

Explore the city of Hue

Hue is a city in central Vietnam that was the seat of Nguyen Dynasty emperors and the national capital from 1802 to 1945. A major attraction is its vast, 19th-century Citadel, surrounded by a moat and thick stone walls. It encompasses the Imperial City, with palaces and shrines; the Forbidden Purple City, once the emperor’s home; and a replica of the Royal Theater.

Immerse the senses in Hoi An

Hoi An is a city on Vietnam’s central coast known for its well-preserved Ancient Town, cut through with canals. The former port city’s melting-pot history is reflected in its architecture, a mix of eras and styles from wooden Chinese shophouses and temples to colorful French colonial buildings, ornate Vietnamese tube houses and the iconic Japanese Covered Bridge with its pagoda.

Take a tour by Cyclo to include the Japanese Bridge, Phung Hung old house, Phuc Kien Assembly Hall and local market, where the food scene will shock and delight you. Keep in mind that you will be on your feet whilst exploring the city centre, so make sure to pack comfortable shoes.

Discover the temples of Mỹ Sơn

Mỹ Sơn is a cluster of abandoned and partially ruined Hindu temples in Quảng Nam province, central Vietnam, constructed between the 4th and the 14th century by the Kings of Champa, an Indianized kingdom of the Cham people. The temples are dedicated to the worship of the god Shiva, known under various local names, the most important of which is Bhadreshvar. These Buddhist temples can be spotted all over a DaNang map, ensuring that this impressive assorted collection of historical beauty is easily accessible to those looking to do a deep dive into the religious elements of this former ancient village and all of its incredible Bhuddist statues.

Book a My Son sanctuary tour.

Located just 60-minutes from Danang International airport, Banyan Tree Lăng Cô is nestled in a unique crescent bay framed by a three-kilometre picturesque beach on the Central Coast of Vietnam. The area is renowned for its pristine coastline, tropical jungles, rugged mountain peaks and close proximity to three of the world’s most stunning UNESCO World Heritage Sites, the cities of Hue and Hoi An and the relics of My Son. Designed to offer absolute privacy and exclusivity, Banyan Tree Lăng Cô features a lagoon pool, famous beaches and exclusive beach pool villas, each of which is equipped with its own private pool, pavilion deck and king-size bed.

Guests can indulge in a spa treatment at the award-winning Banyan Tree Spa with one of the largest treatment offerings available. Visitors can also turn their hand to a Vietnamese cookery class known for its renowned Vietnamese food. You also have the option to take an excursion in a traditional basket boat to explore Lăng Cô’s beautiful lagoons within a local fishing village which is loved for its wild waters.

It is also imperative that travellers treat themselves to a decadent, freshly brewed cup of coffee as Vietnamese Coffee is known to be some of the best in the world. Once can also explore the breath-taking natural beauty that surrounds the resort. From exciting water sports, national parks and access to famous beaches, it’s clear that Da Nang attractions are catered to all tastes and ages.

Fully diving into the wonders of this dazzling city centre would be near impossible given how expansive all of the Da Nang attractions are. That being said, from Monkey Mountain to Dragon Bridge, Rooster church and all of the beautiful beaches made available to the public, Da Nang truly is for everyone.

If you are ready to embark on the adventure of a lifetime, it’s time that you throw your night behind witnessing all of the spectacular Da Nang attractions in person. We highly recommend including this region in your Vietnam itinerary before your next trip to a city desperate to whisk you away and sweep you off your feet.

Top Places to Visit in Malaysia