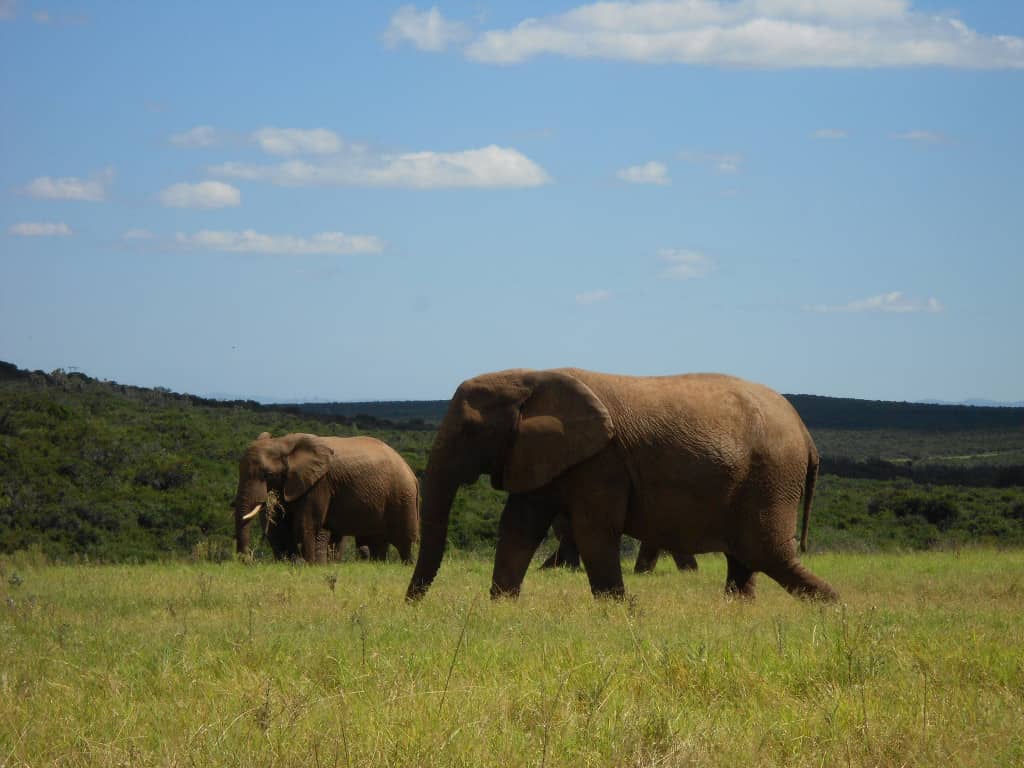 A majestic setting: the Addo Elephant National Park is the third largest national park in South Africa. Its breath-taking landscape encompasses a diverse stretch over a semi-arid karoo, the Zuurberg Mountains, and the Sundays River Valley.

Add to the combination fauna and flora as well as fascinating wildlife animals and you in for an amazing safari experience. Here are some of the animals you’ll see at the Addo Elephant National Park.

The lion is one of the big five game animals, and at Addo Elephant National Park they are most likely to be found in the southern section of the park. In late 2003, the first six lions were introduced to the park and have grown in numbers as well as adapted well to the environment of the game park. During the early hours of the morning, sunset, or night game drives are the best times to spot lions.

Did you know that the hyena is Africa’s most common large carnivore? Hyenas are known for being bold and dangerous, which is why they’re considered to be one of the most skilled predators. Back in 2003, hyenas were also introduced to the park to fulfil a similar role as the lion, which is to balance the ecosystems in the park. Contrast to hyenas being skilled animals, they are known to be shy and elusive, therefore, if you’re looking to see them up close it’s best to do so by venturing on a game drive adventure.

Leopards have a great edge for survival in the wild as they’re experts at climbing trees. Their ability to get high up in trees give them an advantage to go undetected and pounce on their prey unexpectedly. At the game park, leopards have become accustomed to safari vehicles and actually use the vehicles as blinds to hide from prey and plan their move. The best time to spot leopards are during the evening as that is when they’re most active. It is during the night that these nocturnal creatures prove that they’re above the average wildlife predator as they are extremely skilled at catching their prey with stealthy movement.

Buffaloes are social creatures, which is why they move in large herds. Their natural habitats are woodlands, savannahs and lowland rain forest that are in close proximity to water. The buffalo is a member of the Big Five animal group, along with the elephant, lion, leopard and rhino. The wild life animal is considered to be unpredictable and dangerous, particularly when cornered or wounded.

The largest land animal in the world and the only animal that cannot jump, the elephant is an interesting animal to see up close at a game park. Addo Elephant National Park is home to more than 450 elephants. Game drives during the day and during the evening entails that you’ll get to see these amazingly large creatures. Elephants are known as social creatures, particularly as they “purr” like cats as a means of communication.

Addo is particularly known for its dense population of elephants, but these majestic beasts are not all the park has to offer visitors interested in seeing the wildlife of the Eastern Cape.

Following a recent expansion, the park now includes a nearby marine reserve and houses five of the seven major biomes in South Africa, making Addo a unique habitat for a plethora of land and marine species, unrivaled in diversity by any other park in the world.

Many of the plant species found in its borders aren’t found anywhere else on the planet, its biodiversity rivals even the succulent species biome of the Karoo and the unique fynbos biome of the Western Cape.

A biome refers to a large community of plants (or animals) that occur distinctly in a particular region and with Addo having five of South Africa’s seven biomes within its borders, any visitor to the park is sure to be impressed by the over 500 flora species on display.

Regarding fauna, Addo is home to a healthy population of terrestrial species, of which elephants are one, as is suggested by the park’s name. The massive herds are free to roam the 1,640km of the park and are visible throughout.

In addition to the nearly 700 elephants who roam the park, Addo houses the other members of the Big Five, namely lion, leopard, buffalo and rhinoceros.

Other animals that contribute to the park’s diversity are the hyena, buffalo, wildebeest, zebra, and warthog, as well as scores of the various antelope species.

The expansion to include the marine reserve means Addo offers the opportunity to see both whales and great white sharks as well, making it the only place in the world where visitors are able to see the ‘Big Seven’ in their natural habitat.

Following that expansion, the park has also come to include two large islands, St Croix and Bird Island. The former is home to a colony of African penguins, while the latter is home to a considerable number of sea bird species, particularly gannets.

Addo Elephant Park’s accommodation is also highly renowned. There are a number of guesthouses in and around the park that cater to locals and tourists alike. Find several options for accommodations and a guide to the Garden Route here.

Or, search for nearby Addo Elephant National Park accommodation available on Booking below.

Fun Ways to Get Awe-Striking Views of Cape Town

Things to Eat and Drink in Mozambique

Regions of the Kalahari in Botswana