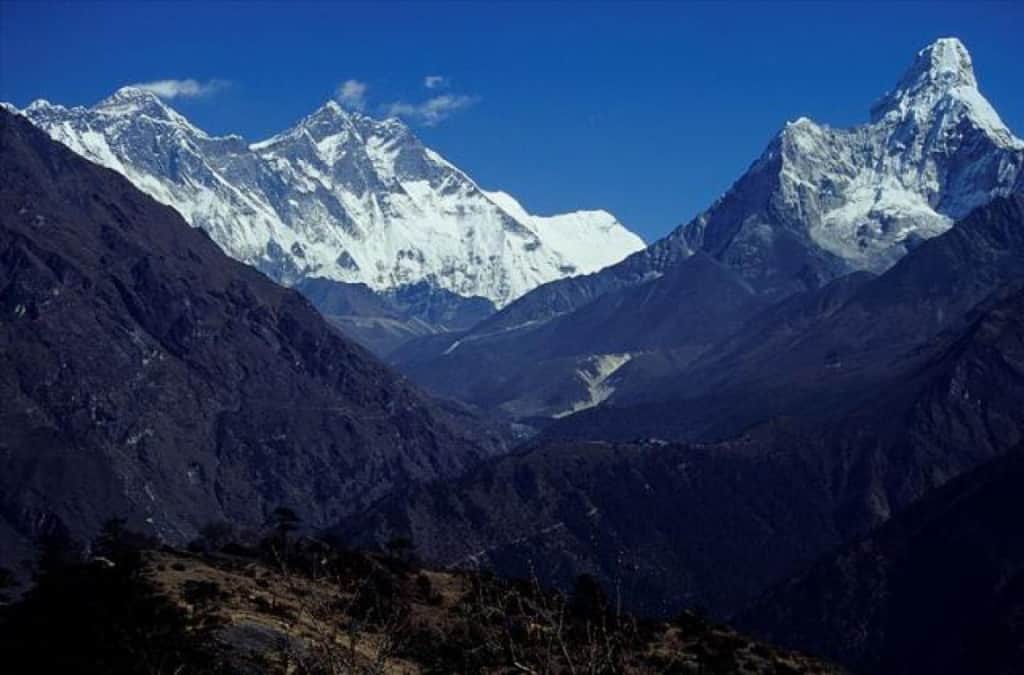 The Everest Base Camp Trek itinerary is one that many trekkers plan for months.

Khumbu is an area for trekking. The trek can be as short as a two day walk from Lukla to Namche Bazaar or an eight to ten day trip to Everest Base Camp. Irrespective of the length of the journey, as there are no roads in the area, it will definitely involve putting on hiking boots and walking the mountain paths. Below is an itinerary from Lukla Airport to Everest Base Camp and all points in between.

If you’re keen on joining an Everest Base Camp organised tour, check out the options offered by GetYourGuide below:

Below is an example of what to expect on your Everest Base Camp Trek itinerary – including where to stop for acclimatization days and where to sleep.

Pass directly through the village of Lukla (there is no compelling reason to stop here, though it is a good place to have breakfast/lunch) and follow the path to Namche. There will no doubt be a string of porters carrying goods up to the Sherpa capital, so the route is easy to locate.

The first village after Lukla is Chheplung, and further down the trail, you will pass through Ghat and Phakding. Both these villages have a good selection of lodges and restaurants and are conveniently located for taking a meal break. However, if you still have enough stamina, it is advisable to press on to Monju (about 90 minutes to two hours from Phakding) to spend the night as this will give you a good start for the steep ascent to Namche the following morning.

After passing through the Sagarmatha Park entrance (1,000rs for overseas visitors), the trail passes through the village of Jorsale and then along the river. You will cross two bridges before beginning the steep ascent to Namche, which can take up to three hours to complete.

Be aware that there are no tea houses or lodges on this path, so ensure that you have ample water to get you to the top. In addition, you are now heading into a high altitude area, so take it easy. Even the fittest people are prone to altitude sickness.

It is recommended to take an altitude acclimatization rest day in Namche. Although no more than a village, the Sherpa capital has two museums, several internet cafes, and, at last count, two pizza houses and three cafes (locally known as bakeries), so there is much to keep you occupied during your stay here. Namche also has two official money changers, so it is a good place to stock up on local currency for the days ahead (NB: Lodges and restaurants in Khumbu only accept Nepali Rupees). There is also a reasonable selection of English books, though the prices are higher than in Kathmandu.

Khumjung (3790m) is over the hill directly behind Namche, and takes about one and a half to two hours to reach. There are several sights in the village (See listings below) and a few lodges and eateries. Khunde is a short walk from Khumjung.

Getting there: Take the Tengboche trail, then at the top of the hill above Namche, near the huge mani stone and just past the bank, head straight up the mountain – the wider path to the right goes to Tengboche. After a steep climb, you will arrive at an airstrip. Cross this and rejoin the path at the other side. After a short distance you’ll pass a stupa. From there, take the paved path down the hill. Soon you will see the playground and school buildings of Khumjung Hillary School.

Thame (3750m) is a more traditional village that is about a two and a half hour to three hour walk from Namche.

Getting there: Leave Namche on the path that passes the ochre colored Namche Monastery (Namche Gompa). From here, it is a relatively flat walk that takes in some very pleasant scenery. The first hamlet on the route is ‘Phurte,’ identified by the forest nursery, and then ‘Tesho.’ The water that runs through ‘Tesho’ comes directly from ‘Mount Khumbi Yui Lha’ – the most sacred mountain to the Sherpas – so there are several retreat huts built into the niches here.

‘Thamo’ is the next village on the trail, and a good place to take lunch. ‘Thame’ has a few lodges and is home to one of Khumbu’s oldest monasteries. This trail is also the traditional route to Tibet, so don’t be surprised to encounter caravans of yaks led by long-haired Tibetan merchants on your walk.

After a short but steep climb out of the village, the path levels off and you can enjoy a few hours of pleasant flat hiking. The first lodges you will pass are at Kyangjuma. Consider taking a break here. The Ama Dablam Lodge has some good food and the sitting area out front offers uninhibited views of Mount Ama Dablam. In addition, the lodge reputedly has the best selection of jewelry for sale in the whole of Khumbu, so if you don’t plan to return this way, pick out a few light souvenirs – They will forever remind you of this sun-blessed place and the sparkling snow capped peak of Ama Dablam.

After a short while, the trail descends to river level, and you will pass a few hamlets and cross some bridges. Then at the hamlet of Phunki Thanga (marked by its water driven prayer wheels), the trail ascends steeply. There are no tea houses or lodges on this stretch, so take some refreshment here and stock up on water for the one and a half to two hour climb to Tengboche.

NB: Take it easy going up here. The air maybe thinner than you are aware!

For those heading for Everest, the trail passes through the villages of Deboche (here, there is a small nunnery on the left – definitely worth a visit), Pangboche (3860m/12664ft), Dingboche and finally Periche (4240m/13910ft). All these villages offer food and lodgings. Pangboche (especially Upper-Pangboche, where the local monastery is located) is, however, probably the the most pleasant as it is surrounded by trees. So, if you decide to take the journey slowly, this is the best place to rest and relax.

For those heading for Island Peak Trek and/or the Lhotse Glacier, your final destination will be Chukhung. As this is further than Periche, you will definitely need to stop the night in Pangboche or Dingboche.

Whether in Periche or Chukhung, you will need to take a day to acclimatize to the high altitude. Take short, slow walks around the village, marvel at the peaks and dig out the book you bought in Namche, but whatever you do, don’t push it at this point. If you begin to feel unwell, inform your guide or lodge owner and return as quickly as possible to a lower altitude.

Spend the night in this small village packed with tourists.

Lobuche to Gorak Shep (5160m/16929ft): Gorak Shep has a small, usually frozen lake, but little in the way of accommodation (especially during the cold winter months). Therefore, you might want to get an early start, pass through Gorak Shep, visit Everest Base Camp (5380m/17650ft) and Kala Patthar (5643m/18513ft where locations near the peak offer very close, but unbalanced views of Everest) and return to Lobuche to sleep.

SIDE TRIP: The trail via Cho La (5370m) to the wonderful Gokyo valley with its glacier lakes and fine views offers some stunning scenery and is not as crowded as that to Everest.

That’s it for your Everest Base Camp trek itinerary! Happy trek planning.

Dangers of climbing Mount Everest to make sure that you’re prepared!

Top One Day Hikes Around Taipei

Sri Lanka’s Ella to Kandy Train – One of the World’s...