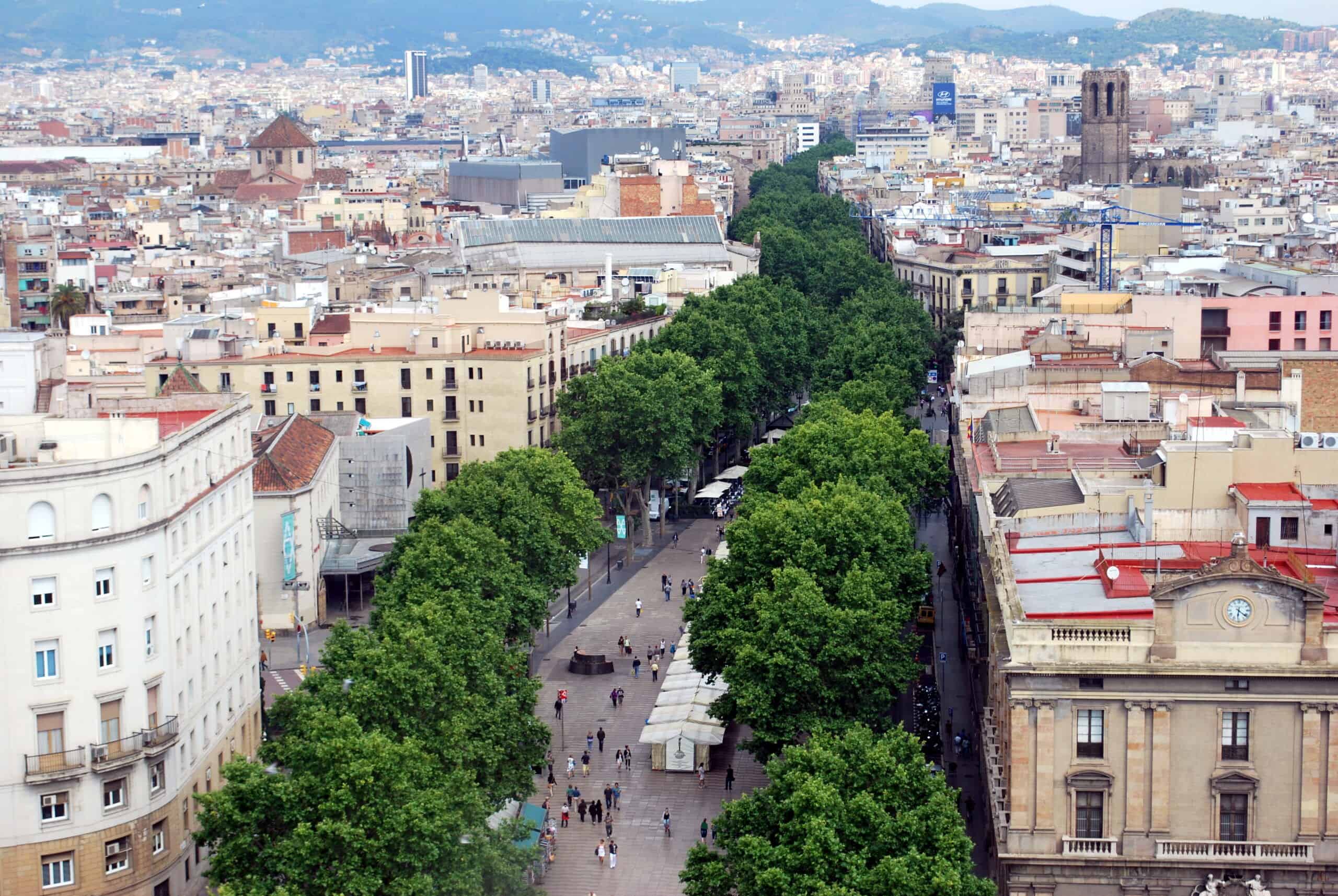 Las Ramblas or La Rambla (from Arabic Ramla which means sand) is one of the most popular attractions in Barcelona.

It is a 1.2 km avenue, loved by both tourists and locals. Las Ramblas starts from Plaza de Catalunya and goes all the way to the Columbus statue.

Strolling straight down Las Ramblas in Barrio Gotico you can look at the various shops or appreciate the variety of street performers, some of which have an spectacular act or an exciting outfit. There are also a number of newspaper kiosks and flower stands.

On each sides of Las Ramblas, there are many cafes and restaurants (including some of the best cheap tapas bars in Barcelona). It’s a great spot to eat or drink something while watching the activities going on the road.

Ask anybody who’s going to visit Barcelona where they’d like to stay, and the common reply is “close to Las Ramblas”. This Barcelona promenade is the most famed street in the city.

The Barri Gotic or Gothic area used to be the old Barcelona (known in Roman times as “Barcino” ) and has a wall running around the city to protect it, with the main entrance the iron gates 1/2 way down the particular Ramblas, and know known as Portaferrissa (literally “Iron door” ). Flanking Barcino to the left was countryside and the Roman church of Sant Pau del Camp (Saint Paul of the countryside) which now is in the heart of the Raval.

Las Ramblas now dissects the old city – leaving El Raval (also from Arabic meaning beyond the walls) to the left and El Gotico to the right. The name “Las Ramblas” is essentially plural – meaning many ramblas all collected together. Ramblas has even coined its own word “ramblear” meaning to stroll / ramble as many neighbors and visitors do on weekends.

From the city’s main square – Playa Catalunya – down to the Port and the monument of Christopher Columbus, Las Ramblas epitomizes Barcelona and is a colourful, 24-hour street where you can find a mix of neighbors and tourists alike.

The whole of the promenade is dotted with paper kiosks which are open twenty-four hours, and is the best place to get your hot-off-the-press copy of the local and international news.

Back in the day, Las Ramblas appeared to be a river bed that ran from the mountain tops to the sea.

The main areas of Las Ramblas

Although Las Ramblas is one steady street, it in fact is made up of 5 Ramblas:

Rambla de Canaletes is the first Rambla starting at Plaza de Catalunya. This Rambla is named after a fountain. According to a legend, when you drink from the fountain, you’ll come back again to visit Barcelona. The second Rambla is Rambla del Estudis. It is named after a 16th century university, the Estudis Generals.

Starting from the top of Plaa Catalunya, and walking down to the port (slightly downhill) we have Rambla de Canaletes – named after the fountains at Plaa Catalunya. This part of Las Ramblas is a favourite for the local OAPs to collect and set the world to rights, as well as the typical hang out for the FC Barcelona fans after a victory (particularly if it’s over their bitter rivals Real Madrid).

Next in the continual transition is Rambla de los Estudios (studies), which joins the Catalana Library on Calle infirmary, and is where the beginning of the street performers and human statues Las Ramblas has become so famous for, start to appear.

This stretch is closely followed by Rambla de los capuxinos, where you will find some of the city’s finest and oldest cafes sitting alongside the impressive Liceu Opera house and have been the inspiration to several visitors and writers to Barcelona. What better place to stop and write a postcar with a caf con leche than here!? This part is often referred to as rambla de les flores due to the many flower sellers crammed into the small space here. It’s also a dazzling place to visit during the saint George’s day celebrations (the patron saint of Catalunya) as roses are historically given on this day.

The following Rambla is Rambla del Sant Josep named after a convent which was demolished in the mid 1900 and replaced by Mercat de Boqueria. La Mercat de Boqueria is a common fruit market. Here you can find refreshing fish, vegetables, fruit and beef.

The fourth Rambla is Rambla del Caputxins. This Rambla is also named after a demolished building, Capuchin monasterysturdy. A fascinating building, called Gran Movie house del Liceu, is situated at this portion of Las Ramblas.

The final stretch is Rambla de Santa Monica, named after the old Portal de Santa Monica still untouched on a nearby street. Here the city’s many artists and caricature painters plant their stalls along with the everyday three cup conmen who never fail to attract interest. Crowning the base of Las Ramblas and the entrance to Port Vell (“the old Port”) is the Christopher Columbus monument – pointing out towards Las Americas. Look for fantastic and inexpensive Ferienwohnungen Barcelona next to the Columbus monument.

This Rambla leads to a roundabout with the Columbus Monument. This portion of The Rambla is broader then the higher Ramblas and while strolling down make sure to glance to your left and walk into Plaza True for a drink to cool off. If you want paintings from locals artists, you should find most here, and at the end of Las Ramblas, you’ll find a nice roundabout which has the statue of Colom as a middle point.

From Las Ramblas you can cross a bridge over the sea and carry on your explorations by going into the Maremagnum complex.

Check out our guide on where to stay in Barcelona for more info on staying in Las Ramblas and hotel options.

Looking for more tips on Barcelona? Check out these posts: