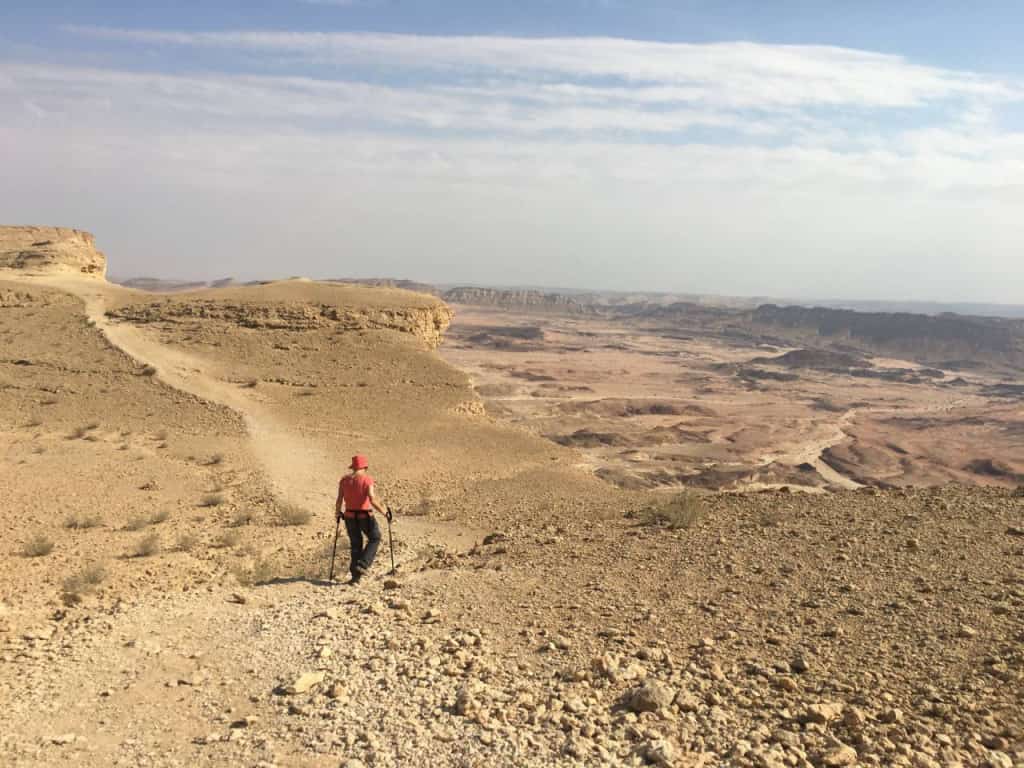 Makhtesh Ramon is a large, 40 Km diameter crater in the Negev Desert in the southern part of Israel. So what’s the difference between a “Crater” and a “Makhtesh”?

The word “Makhtesh” is the Hebrew word for a Mortar and Pestle. The geological landform was given this name because of its similarity to a grinding bowl.

There are only seven such craters in the world, five of them located in the Land of Israel and two in the Sinai Desert near the Egypt-Israel border. Of the five located in Israel, two are tiny near the summit of Mount Arif. The ones in the Sinia desert are also small.

That leaves us with the three main Makhteshim (craters) in Israel:

The term “Makhtesh” has been adopted internationally, and geological dictionaries use it when referring to the phenomena.

How was the “Maktesh” created?

The area was made of a harder top layer of rocks that covered underneath them softer rocks. Over millions of years, erosion removed the softer layer under the harder rock, until it eventually collapsed under their own weight, creating the carter-like valley we see today. This radical collapse of land created a unique “Geological Museum”.

The crater is located nearby the small desert town of Mitspe Ramon (Population 5,000), about 2.5 hours drive from Tel-Aviv or Jerusalem. It is also served very well with public transport. However, exploring the crater without a car is limited, and therefore a hired car is highly recommended.

Lodging in and around Makhtesh Ramon

There is a wide range of accommodation options in town (Mitspe Ramon). You can spoil yourself in one of the most luxurious hotels in the country, the Bereshit Hotel. Besides the luxury, you will get a fantastic view of the Makhtesh directly from your private balcony.  On the other side of the spectrum, several hostels offer dormitories and modest private rooms. Besides, you can find many options in between. If you want to be closer to nature, you can sleep in the Beerot Campground located in the heart of the crater (The only lodging option inside the crater). You can sleep there in your own tent, but also in modest shacks and cabins.

Mitspe Ramon is a sleepy small town. But it offers a decent selection of restaurants ranging from street food up to higher level. There are also a few pubs and a supermarket.

Tip – treat yourself with an authentic Bedouin dinner in the nearby village Arica.

What to see and do?

Go here first, as it will give a good introduction and understanding of what you are going to explore!

On the edge of the crater’s cliff sits the visitors center, a mandatory station before a visit to the area. The center includes observation from a panoramic window, dynamic-interactive exhibit, and a 3D model of the Makhtesh. The 2nd half of the center is dedicated to the story of Ilan Ramon (The first Israeli astronaut). Ilan was one of the seven crew members of the Columbia Space Shuttle that disintegrated upon reentering the earth’s atmosphere On February 1, 2003.

Makhtesh Ramon is a hiker’s paradise with a large selection of hiking trails at all levels. If you want a tougher hike, the classic is to climb to the summit of Mount Ardon. Alternatively, you can pick up a hiking map in the visitor’s center and plan your own walk. Free consultation on hiking trails is available in the Field School and Beerot Campground.

If you are not up to a hike or if you don’t have lots of time, a Jeep tour in the Maktesh is highly recommended. Several excellent local guides are offering this service. Tours are usually offered for a full or half a day.

The nights in the Negev desert are dark and clear, with minimal light pollution. It makes them an excellent venue for Star Gazing. Several local guides offer this activity. They will take you to a dark area with a good telescope and lots of knowledge and stories.

If you into any of these, Makhtesh Ramon is a perfect arena to do it. The natural setting is like a big LunaPark, and there are plenty of professional local vendors offering the activities:

Main Sights to visit with a passenger car:

Avdat is a site of a ruined Nabataean town in the Negev Desert about 20 Kilometers north of Mitspe Ramon. It was the most important town along the ancient Incense Route after Petra. It was founded in the 3rd century BCE, and inhabited by Nabataeans, Romans, and Byzantines. Avdat was a seasonal camping ground for Nabataean caravans traveling along the ancient Gaza-Petra road during the 2nd and 3rd centuries BCE. Avdat was declared a World Heritage Site by UNESCO in 2005.

The impressive ruins are scattered on the flat summit of a steep hill, and include findings from 3 different eras:

In the old days, nature conservation was not common in Israel. A large quarry was operating inside the Makhtesh. A few years ago, Nature and Parks Authority rehabilitated the abandoned mining area and converted it into an open geological museum displaying a variety of colorful rocks and fascinating geological phenomena.

The “Minsara” (Carpentry), is a small hill in the Ramon Crater, 5 minutes’ drive from Mitspe Ramon.  The hill is covered with sandstone columns featuring flat surfaces that look like wooden boards cut out in a carpentry shop. Most of them have 4-6 faces, some sticking out of the ground at a right angle while others scattered across the slope.

How was the ” Carpentry ” formed?
Hot magma that penetrated from the depths of the earth melted the sandstone. The rock expanded, and after cooling down, it shrank and cracked, creating the rock prisms that are scattered here.

A group of 17 human-made waterholes, dug during King Solomon’s period (10th century BCE). Today, 3000 years later, they still get filled with water each winter. The sight of water in the desert is always delightful, and there is an easy 4 km circular trail that passes through the cisterns.

The Sculpture Park is located on the edge of Ramon Crater near the entrance to Mitzpe Ramon. Scattered over a large area are sculptures built of huge rocks. Some are musical sculptures, including metal swings filled with gravel, which make noise while swinging, a “Gong” complex with large bells, and a wind chime device. The park merges beautifully with the desert scenery from the edge of the crater’s cliff.

In recent years, the sleepy desert town Mitspe Ramon, started to attract artists and other spiritual characters from the busy cities of central Israel. The small industrial area in the north of the city converted into what is called today the “Spice Quarter”. The area became a place of artists, creators, artisans, and dreamers. It is a pleasant place to ramble and have a drink or a bite.

The Sunrise or Sunset over Makhtesh Ramon is breathtaking. Both sky and earth are painted in magical reddish shades. Recommended spots are the lookout balcony near the visitor center or the Sculpture Park. If you feel more energetic, take a walk on the scenic trail that starts at the visitor’s center and goes west following the crater’s edge. The path is about 3 kilometers long, flat, and easy to follow. It ends at the Camel Mountain lookout on the outskirts of Mitzpe Ramon.