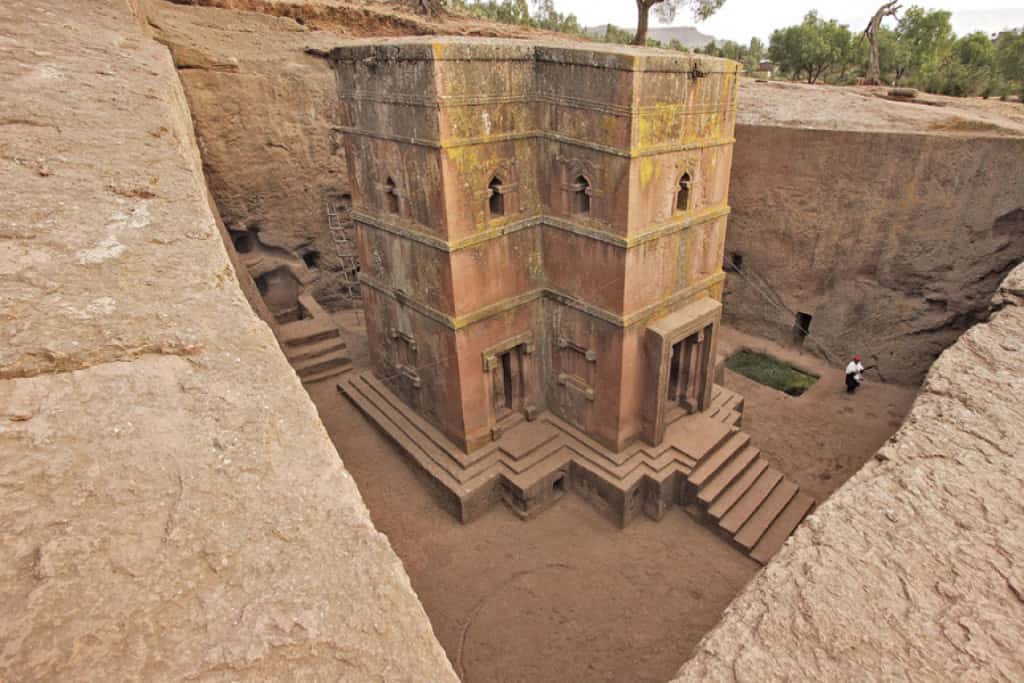 Ethiopia is one of Wild Frontiers’ most popular destinations in Africa, but it is still relatively seldom-visited.

The country has worked hard to overcome negative perceptions over the years, and it is slowly gaining a reputation as one of the most varied and fascinating destinations in Africa.

Here are a few surprising facts about Ethiopia that you probably didn’t know, including what Ethiopia is famous for.

1. Ethiopia is Home to the Cruelest Place on Earth

National Geographic named the Danakil Depression “the cruelest place on earth”. This forbidding desert basin lies in northeast Ethiopia, and has year-round temperatures of 95 degrees, which sometimes hit a high of 145 degrees. The salt deposited when the Red Sea flooded this region many millennia ago provides a much-needed source of income for the Afar people, who risk dangerous conditions to mine the plentiful salt.

2. Ethiopia was Home to a Living God, According to the Rastafari Movement

Emperor Haile Selassie was Ethiopia’s regent from 1916 to 1930 and emperor from 1930 until 1974, when he was overthrown by the Marxist dictator Mengitsu Haile Mariam. Haile Selassie was heir to a dynasty that reportedly dated back to Menelik I, the child of the Queen of Sheba and King Solomon. As such he was seen as the returned messiah of the bible, God incarnate, by the Rastafari movement. His name is frequently dropped into reggae songs, and Bob Marley’s “War” was based around a speech given by Haile Selassie to the United Nations in 1963.

Probably one of the facts about Ethiopia that you didn’t know. Many of Ethiopia’s different tribes are associated with different styles of music. Undoubtedly the most popular musical export is Ethio-Jazz.  Traditionally, Ethiopian music is based around five notes, but in the 1970’s musician Mulatu Astatke began fusing these five tones with the 12 tones of jazz, and Ethio-Jazz was born. You can hear Ethio-jazz today in one of Addis Ababa’s many live music venues.

4. One of Ethiopia’s Most Famous Residents is 3.2 Million Years Old

AL 288-1 (more commonly known as Lucy) is an Australopithecus Afarensis found in the Afar Depression in 1974. Her skeleton was found 40% complete, an astonishing discovery which excited anthropologists worldwide, providing invaluable insight into the evolution of modern humans.

Despite having an upright walk similar to that of humans, Lucy has a small skull capacity similar to that of apes, supporting the view that bipedalism preceded increase in brain size in early humans. Despite being a fully-grown adult, Lucy would have stood at just 3 and a half feet tall and weighed 63 pounds. After six years touring the US, Lucy returned to Ethiopia in May 2013, and now resides in the National Museum at Addis Ababa.

5. The Omo Valley is One of the Most Diverse Tribal Places in Africa

The remote Omo Valley in Southwest Ethiopia is home to some of Ethiopia’s most fascinating and diverse ethnic groups, including the Hamer, the Banna, the Mursi and the Surma. Amongst the Mursi it is still common for women to wear large pottery or wooden plates in their lower lips.

6. The Queen of Sheba Hailed from Ethiopia

According to the legend, the Ethiopian Queen of Sheba journeyed to Israel to visit King Solomon. After serving a meal of spicy food, the sneaky king left a drink of water by the queen’s bedside, who awoke in the night to drink from it. In a cunning move, Solomon vowed not to take anything from the queen, if she didn’t take anything from him.

Solomon then demanded his part of the bargain, and the Queen was shortly returning to Ethiopia carrying Solomon’s child, the future king Menelik. Menelik is later said to have visited his father in Israel, where he made off with the Ark of the Covenant, explaining its supposed current location in Axum.

7. Shoulder Dancing is a Popular Form of Dance

This unique form of dancing has its origins in tribal life in Ethiopia. Eskesta, meaning “Dancing shoulders”, is practiced to a variety of war songs, love songs, hunting songs and shepherd songs.

8. Ethiopia is Seven Years Behind the Rest of the World

Ethiopia continues to use the Julian calendar, which most of the rest of the world stopped using in 1582. The Julian calendar is made up of 13 months – 12 months lasting 30 days, and one lasting 5 days. The country celebrates New Year on 11 September.

Bet you didn’t know that fact about Ethiopia?

9. Ethiopia is Home to a Unique Wildlife

Ethiopia has a variety of unique wildlife, the most famous being the Gelada Baboon, which lives in the Ethiopian highlands. Another famous animal is the Simien Fox, or Ethiopian Wolf. Similar to the coyote in size and build, it has red and white fur and is Africa’s most endangered carnivore. The best place to see the Simian Fox is in the Bale Mountains.

Ethiopia has an amazing variety of stunning scenarios, from mountains like the Bale and Simien ranges, to the volcanic landscape of the Danakil Depression, to the fertile Omo Valley. The country’s varied scenarios are one of the biggest surprises to visitors who still associate the country with the famine appeals of the 1980’s.

11. Ethiopia is a Christan Stronghold

Ethiopia has a fascinating mixture of traditional religions and ancient spiritual beliefs. Over 60% of the population is Christian, with the majority of those being Ethiopian Orthodox. The long history of Christianity in Ethiopia can be seen in the fascinating ancient rock-cut churches of Lalibela,  and the church claims to possess the ark of the Covenant, in Axum. The country’s most popular festival is the annual Timkat Festival, a noisy and colourful afair where a model of the Ark is paraded through the streets and priests use powerful hoses to spray the crowds with holy water.

We hope that these facts about Ethiopia have taught you something that you didn’t know!

A Guide to Visiting Chefchaouen: The Jewel of North Morocco

The Essentials for Planning a South Africa Road Trip