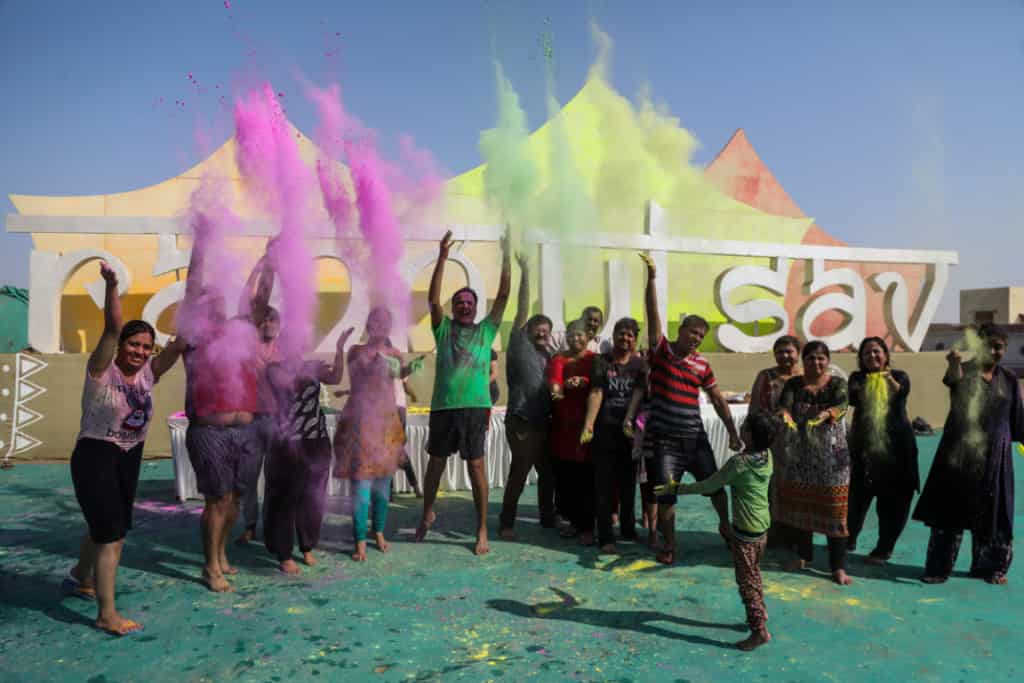 India is well known for its rich cultural diversity which is what attracts thousands of travellers every year to visit here. It’s also known for the many fairs and festivals in India.

Compared to many European countries, it is a really vast region with each region having a distinct set of traditions, rituals, and festivals. Apart from the traditional festivals like Diwali, Holi, Ganesh Chaturthi, etc. which are celebrated in different parts of the country, there are some other fairs and festivals in India which celebrate the local traditions in a very unique manner.

These festivals showcase the unique tradition, culture, way of life of the respective regions, and also provide a common platform for tourists and travelers to immerse themselves into the local celebration to witness and experience these lesser-known traditions.

Festivals in India to experience

Here is a list of some of these festivals in India which you must attend for an experience like never before.

Rann Utsav takes place in Kutch, a beautiful landscape situated in Gujarat. The place is popular for its shimmering white landscape especially during the night under a full moon. Rann Utsav is a festival celebrating nature’s beauty through Dance and Music.

At this festival, all the colors of the state come together, showcasing a fusion of the unique arts, traditions, folk dances and handicrafts which the state is popular for.

Rann Utsav is organized by Gujarat Tourism and is celebrated during the winter months, the time when Kutch is at its beautiful peak.

The best way to make the most of this carnival is by booking the swiss tents which are set up by the organizers itself creating a town of its own for those months. There are around 400 tents which are set up and you can choose between air-conditioned and non-air-conditioned options. There are packages available for the festival where you can stay for up to 3 nights. They also offer pick up services for those who book the accommodation from nearby airport and train station.

When at the Utsav, you could immerse yourself into a triumph of local traditions by enjoying the performances by local folk artists or delve into this panoramic beauty by offering yourself a camel ride or hopping onto a hot air balloon. You could also interact with the local community and help them flourish by buying items specially handcrafted by local artisans.

It is an extremely popular festival and the accommodation for the same gets booked out pretty early.

Make sure you book before its sold out. Search for accommodation in Kutch.

This festival is a portrayal of the unique Rajasthani culture and is extremely popular worldwide where it witnesses around a million tourists from around the globe.

Pushkar Mela, also known as Pushkar Camel Fair is the oldest camel fair which is being traditionally celebrated for the past 100 years.

Originally it used to be a five-day long affair where the main day is the full moon night which is considered extremely auspicious. Nowadays it is celebrated for a period of nine days due to its popularity and massive footfall.

There are numerous activities planned for all the days where you could be involved in the festivities like a local – enjoy the folk performances, go for camel safari or experiential hot air balloons to witness the awe-inspiring sunsets over the dessert, take a dip into the holy Pushkar Lake – one of the major traditions of the Fair which is being followed since time immemorial and get yourself some local handicrafts like the Rajasthani attire, home decor items, silver jewellery etc.

Pushkar Mela is an extravagant affair that preserves the popular Rajasthani traditions and you must attend it for a day if you cannot be a part of the nine-long period. You can read all about the highlights for various days here. You can book your tickets online while you choose among various accommodation options which are specially set up for those who are visiting during the festival.

Jaipur Literature Festival is a very renowned festival which takes place yearly in the month of January. It is a time for all literary lovers to meet authors, writers, translators etc. from all across the country at this common platform where they express, debate and dialogue about topics of relevance.

The festival showcases speakers from diverse fields where some of them have also been Nobel Laureates like J.M. Coetzee, Orhan Pamuk and others have been well-known names in the literary world like Gulzar, Javed Akhtar, etc.

Apart from a magical world for book lovers where you get to interact with these renowned speakers, buy books and meet other bookworms, there are other experiential elements which are planned for the delegates like invites to exclusive events, gourmet lunches and extended musical and other lined up events planned to add to the festival’s charm.

Another interesting addition to the Literature festival was the Jaipur Music Stage which rolls our musical nights each evening for those looking to unwind and relax after heavy discussion during the talks.

It showcases brilliant musical talent, creating a celebratory yet relaxing atmosphere with diverse music genres, curating a place of inclusivity and openness beyond barriers or differences.

Apart from this, you can also keep your competitive streak on by participating in various competitions that the festival hosts like Blogging, Essay Writing, Quizzes and Youth Outreach.

You can either be a part of the festival by buying your pass as a delegate which would give you access to various activities mentioned above or you could register for a general entry or as a student.

The Jaipur Literature Festival is getting bigger and better each year with a great lineup of speakers, the addition of experiential activities and a lot of other things.

The line-up and other details have not been released yet but you can sign up for their newsletter and stay updated on all the latest news.

If you happen to visit Jaipur, you should definitely consider travelling to Udaipur which is also in Rajasthan and quite close-by. Udaipur is considered as one of the most romantic cities in the world. Do checkout some tips for things to do in Udaipur here.

A much celebrated affair which takes place in Naga heritage village in Nagaland where the majority of people in the region are dependent on agriculture and there are various tribes co-existing in the region. The Hornbill festival aims to bring together different tribes of the region to promote the rich and unique culture and traditional realms of the locals, a way to showcase their way of life where their traditions, local dances, and other affairs are at display.

The festival usually takes place in the month of December for a span of seven days and is popularly known as ‘Festivals of festivals’ due to its extravagant celebrations where you will get to witness local dance, musical performances, and artistic craftsmanship.

The locally produced items like herbal medicines, local food and drinks, and the works of local artists like paintings, wood engravings, etc are available for you to buy.

It is a perfect way for you to go far away from your well-developed life and expose yourself to a very different and simplistic way of living. You can also stay with the locals in homestays to get an in-depth experience.

You can follow them on Facebook for all the latest updates.  You can read all about how to reach Kohima in Nagaland and other entry formalities here.

The transition of the winter months into summer ones is called Uttarayan in Gujarat, also popularly known as Makar Sankranti in North India.

This ending of winters and the beginning of summer is celebrated with a lot of enthusiasm in the city of Ahmedabad with The Kite Festival where you could see the sky filled with colored kites of different shapes and sizes.

It started as a local tradition where in order to welcome summer, families would gather and fly kites on their terrace and compete with neighboring kites by cutting their strings and winning the kite battle in a fun-spirited manner. The entire vibe would be festive with the exchange of sweets and playing music.

In 1989, the city of Ahmedabad hosted an official Kite Festival which witnessed brilliant kite flyers from all across the globe to celebrate Uttarayan and since then The International Kite Festival has been a yearly event which takes place on Makar Sankranti on January 14 even though the Kite flying begins a few days prior to the main festival.

It is an extremely fun festival with a sky filled with colorful kites during the day, and with tukkals or paper lanterns lighting up the night, allowing you to witness a unique kind of celebration filled with a fun competitive spirit, festivities and greetings. You can read all about the International Kite Festival here.

The North-Eastern part of the country is majorly dependent on agriculture and traditionally, a lot of respect is given to the practice of farming. Bihu is the official festival of the north-eastern state of Assam which is celebrated thrice a year on three distinct phases of the farming calendar.

Rongali Bihu or Bohag Bihu is celebrated in the month of April which is the first phase and is followed by Kati Bihu or Kongali Bihu and Magh Bihu which are then celebrated during the month of October and January respectively. Rongali Bihu is the most important Bihu since it marks the beginning of the harvesting season.

It is celebrated with a lot of festive spirits where the locals dance and cook traditional meals using rice.

Another interesting thing about the Festival is that it is extremely secular where everyone is invited and allowed to join the celebrations irrespective of their caste and creed.

You can read all about the Bihu festival here.

The Original Red Bull in Thailand

Things to Keep in Mind When Visiting Temples in India