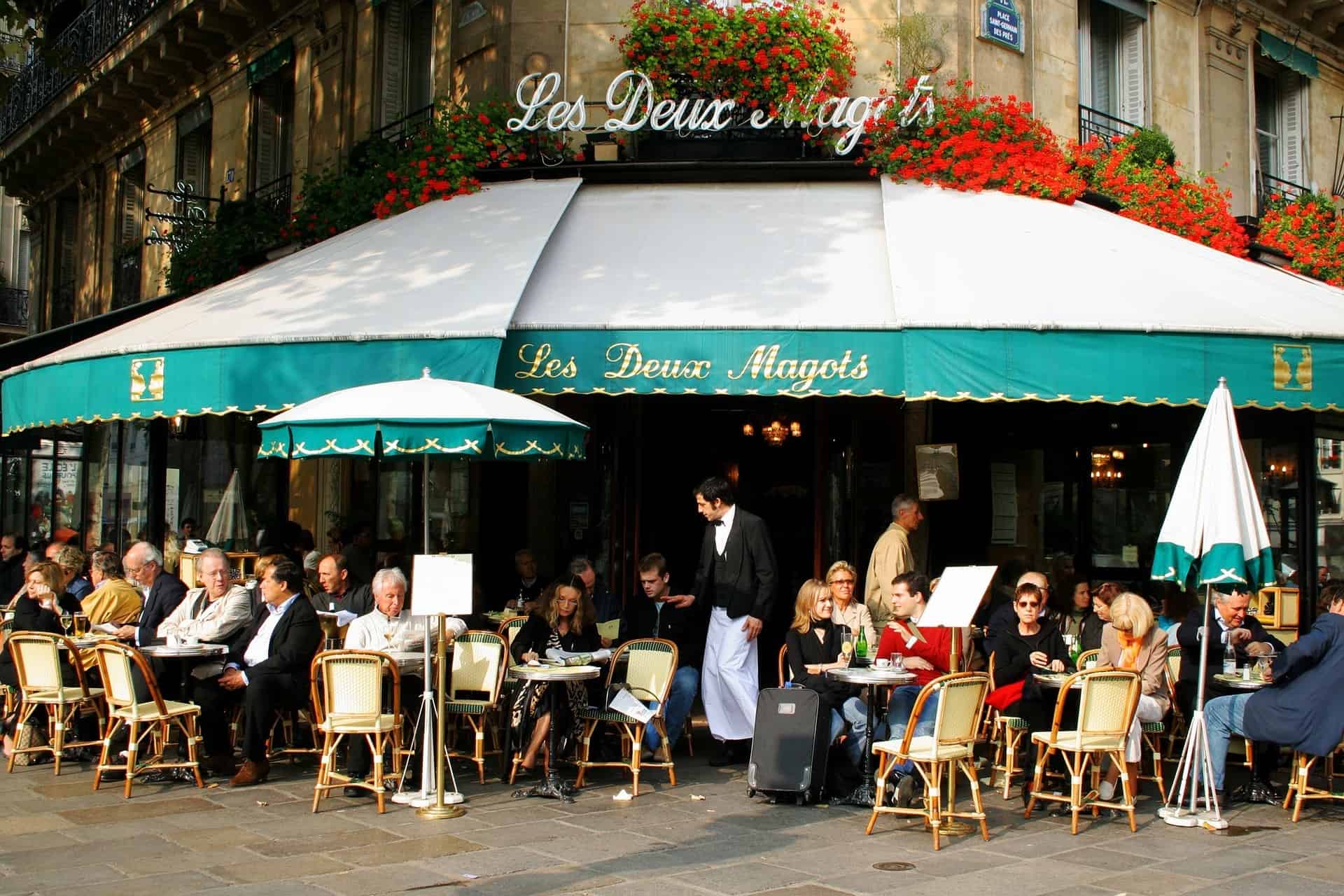 Paris is one of Europe’s culinary centres – meaning the food in Paris extends beyond the traditional French cuisine.

The restaurant trade began here just over 220 years ago and continues to thrive. It may however come as a surprise that Paris isn’t considered the culinary capital of France, rather some people prefer the French cooking found in small rural restaurants, outside of the city, closer to the farms and with their focus on freshness and regional specialities.

Even amongst French cities, Paris has long been considered by some people as second to Lyon for fine dining.

Food in Paris: The restaurant scene

There have been other challenges in the last 20 years or so as restaurateurs in places like San Francisco and Sydney briefly surpassed their Parisian fore bearers, again with an emphasis on freshness of ingredients but also borrowings from other cuisines.

Parisian cooks didn’t just rest on their laurels during this time, rather they travelled, taught, and studied, and together with Paris’s own immigrant communities, have revitalized the restaurant trade. Today you can find hundreds of beautiful restaurants with thoughtful (or just trendy) interior design and well-planned and executed cartes and menus offering a creative mélange of French and exotic foreign cuisines. It’s safe to say that Paris is once again catching up with or edging ahead of its Anglophone rivals.

Of course there are also some traditional offerings, and for the budget conscious there are hundreds of traditional bistros, with their sidewalk terraces offering a choice of fairly simple (usually meat centred) meals for reasonable prices.

For the uninitiated, it is unfortunately possible to have a uniformly poor dining experience during a stay in Paris, mainly because many attractions are situated in upscale areas of town, and that mass tourism attracts price gougers. It is frequent to hear of people complaining of very high Parisian prices for poor food and poor service, because they always tried to eat close to major tourist magnets. Try to go eat where the locals eat for great service and good food in Paris.

Many restaurants are tiny and have tables close together – square metres are at a premium and understandably restaurateurs need to make the most of limited space. In some cases when the restaurant is crowded, you may have to sit beside strangers at the same table. If that does not appeal to you, go to a more upscale place where you will pay for the extra space.

Trendy restaurants in Paris often require reservations weeks, if not months in advance. If you haven’t planned far enough ahead, try to get a reservation for lunch which is generally easier and less expensive.

If you have the time, we highly recommend joining a food tour in Paris to dive fully into the culinary scene.

Eating out in Paris can be expensive.

However don’t believe people when they say you can’t do Paris on the cheap – you can! The key is to stay away from the beaten tracks and the obviously expensive Champs Elysees. Around the lesser visited quarters especially, there are many cheap and yummy restaurants to be found.

Seek out the best breakfast in Paris! Breakfast or “petit dejeuner” at a restaurant, possibly in your hotel, consisting of some croissants, coffee, and maybe a piece of fruit (this typically costs around $5 to $10 depending on the area). Get a ‘walking lunch’ from one of Paris’ many food stands–a panino in the centre of the city, a crepe from a crepe stand, a felafel pita or take-out Chinese in the Marais.

Traiteurs serving Chinese food are ubiquitous in the city and good for a cheap lunch and many patisseries sell inexpensive coffee and sandwiches. All these are cheap (about the same as breakfast), easy, and allow you to maximize your sightseeing and walking time while enjoying delicious local or ethnic food. Exploring Paris by foot is the best way to explore!

For dinner, stroll the streets at dusk and consider a 20-to-40-Euro prix-fixe menu.

The key is to order from the Prix-Fixe menu, and NOT off the A la Carte menu unless you want to pay an arm and a leg. In many places a three course meal can be found for about €15. This way you can sample the food cheaply and is usually more “French”.This will get you 3 or 4 courses, possibly with wine, and an unhurried, candlelit, magical European evening. If you alternate days like this with low-budget, self-guided eating (picnicking, snacking, street food) you will be satisfied without breaking the bank.

If one of the aims of your trip to Paris is to indulge in its fine dining, though, the most cost-effective way to do this is to make the main meal of your day lunch. Virtually all restaurants in Paris offer a good prix-fixe deal. By complementing this with a bakery breakfast and a light self-catered dinner, you will be able to experience the best of Parisian food and still stick to a budget.

Self catering cheap eats in Paris

Self catering in Paris Budget travellers will be very pleased with the range and quality of products on offer at the open air markets (e.g. the biggest one on Boul Richard Lenoir (near the Bastille), Rue Mouffetard, Place Buci, Place de la Madeleine and over the Canal Saint-Martin in the 11th or in any other arrondissement).

If your accommodation has cooking facilities you’re set, especially for wine and cheese, a decent bottle of French wine will set you back all of about €3-€5, while the very good stuff starts at around €7. Bottles for less than €3 are not recommended.

Keep in mind that the small épiceries which open until late are more expensive than the supermarchés ( Casino, Monoprix, Franprix, etc). For wine, the price difference can be up to €2.

Buy a baguette, some cheese and a good bottle of wine and join the Parisian youth for a pique-nique along the Seine (especially on the Île Saint-Louis) or along the Canal Saint-Martin.

The finest food stores are Lafayette Gourmet in the Galeries Lafayette or La Grande Epicerie in the luxury department store Le Bon Marché. They are worth discovering. You will find a large variety of wines there, otherwise try wine stores such as Nicolas or Le Relais de Bacchus (all over the city).

For seafood lovers, Paris is a great place to try moules frites (steamed mussels and French fries) (better in fall and winter), oysters, sea snails, and other delicacies. Meat specialties include venison (deer), boar, and other game (especially in the fall and winter hunting season), as well as French favourites such as lamb, veal, beef, and pork.

When you are looking for a restaurant in Paris, be a little careful of those where the staff readily speak English. These restaurants are usually – but not always – geared towards tourists. It does make a difference in the staff’s service and behaviour whether they expect you to return or not.

Sometimes the advertised fixed price tourist menus (€10-€15) are a good deal. If you’re interested in the really good and more authentic stuff (and if you have learned some words of French) try one of the small bistro where the French go during lunch time. Go out and enjoy the delicious food in Paris – there’s more than croissants!