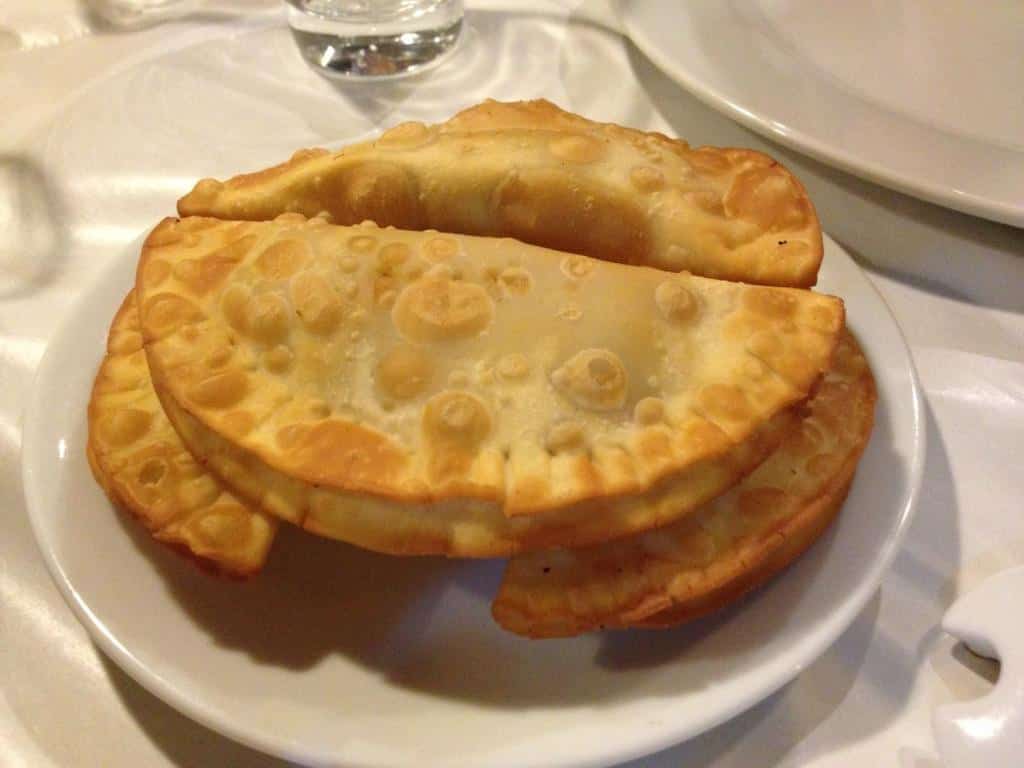 I’m from Rio de Janeiro, but have lived in the US for many years.

Every time I come to visit my hometown, I make sure to get my fix of petiscos (or salgadinhos), which are the finger foods you eat while drinking at a bar with your friends (something the cariocas do for hours and hours).

I also try the new flavors of caipirinhas (it’s crazy how they are always coming up with something new): if you haven’t heard about them, caipirinhas are pretty much the national drink – originally made with limes, ice, sugar and cachaça, a sugar cane strong alcoholic beverage. These days caipirinhas come in a range of flavors – instead of (or in addition to) limes, you can get passion fruit, strawberries, grapes, lychees, there’s no limit to the bartenders creativity.

Make sure you grab a table (or a spot – you’ll see what I mean) in one of the city many traditional bars and try some of these foods and drinks next time you are in Rio!

Very thin pastry, deep fried, filled with seasoned ground beef, or cheese, or shrimp, or crab, and so on! My favorite, really. I love every single flavor of pastel, but shrimp or crab have a special place in my heart (and stomach).

These salted cod fish balls are also a long-time tradition. The best ones have lots of bacalhau and not a lot of potato. Take a bite, pour some olive oil on top, have a sip of cold beer or caipirinha, take another bite 🙂 Heaven.

I had never seen this before, just ate them for the first time last week and already I’m in love. I love feijoada, the black bean and pork stew which is kind of a Brazilian national dish, so I was intrigued by the idea of eating it in a “bolinho” form (bolinho is a round cake, sweet or savory). The dough is made with seasoned black beans and inside you get tiny pork sausage and kale bites,  so good!

aipim = yucca root. Very common in Brazil, used in place of potato in lots of dishes. Bolinhos de aipim can have all sorts of different fillings, my favorites are shrimp or carne seca, which is a typical salted and dried beef (a Brazilian beef jerky of sorts). Sometimes they also have catupiry cheese in it, which is a Brazilian cream cheese that I miss greatly.

If it’s cold, you might consider ordering caldinho de feijão – basically a feijoada in a cup, so you can drink it or eat it like a soup, sometimes with a shot of cachaça on the side (also called feijão amigo).

You can order a escondidinho (which means something is hidden) of shrimp or carne seca usually (sometimes chicken too). The seasoned meat is hidden under a crust of mashed and buttery yucca.

Instead of french fries, you can get fried yucca. They usually come in large pieces, like steak fries. Usually you can order aipim frito with grilled sausage and onions (com linguiça e cebolas) or with carne seca, both are great combinations.

A crab (siri) dish. The crab is cooked with coconut milk and lots of seasonings, spooned inside of a shell and then taken to the oven with grated parmesan cheese on top to get its crispy crust. Squeeze a lime over it and dig in.

I love these little cups of flaky pastry with a variety of fillings. Palmito (heart of palm), camarão (shrimp), frango (chicken) or simply queijo (cheese), always a great snack.

A drink made of cachaça and cashew juice (if you have never seen the cashew fruit, you might be surprised to learn that there is a cashew apple where the cashew nut comes from). Google cashew fruit and see the images that come up!

Very traditional, beachfront, no tables. You order your food and drink at the counter and take it to the ocean wall to sit down, eat, drink and chat with a beautiful view. If you really rather sit down at a proper table, they have a tiny restaurant on the second floor (good for cold or rainy days).

A very popular bar, known for its chopp and petiscos. It gets very crowded, so be ready to wait or stand.

Things To Do in Manaus, Brazil: Visit Teatro Amazonas

How to Get to Providencia Island in Colombia