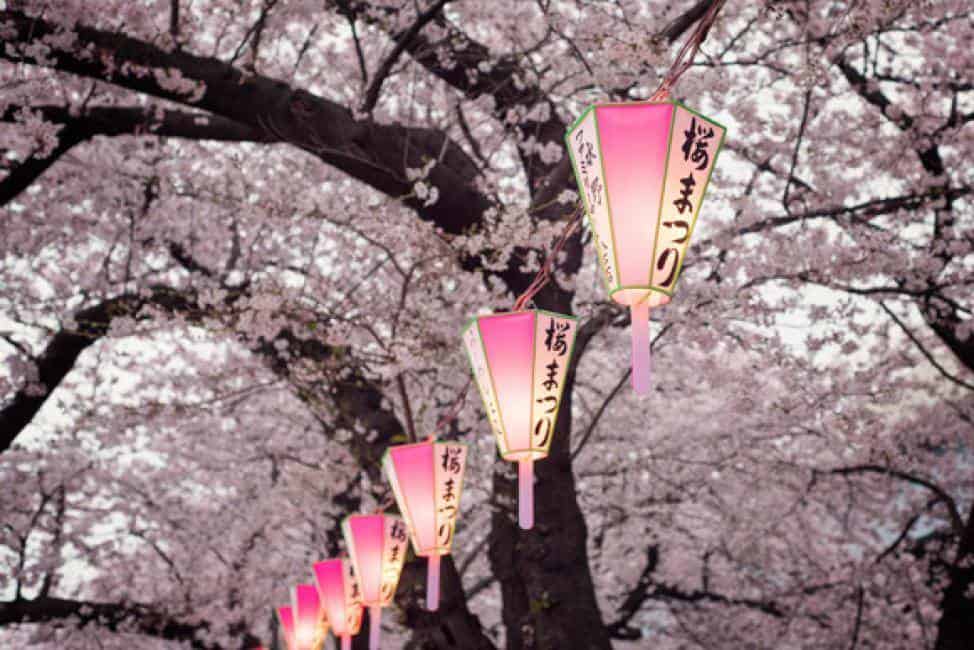 Hanami is the Japanese tradition of viewing cherry blossoms. The custom is centuries old, dating back to the Nara period around 710 AD. The cherry blossoms in Japan are one of the biggest tourist attractions in the country.

In Japan, flowering cherry blossoms are called “sakura” and usually peak at the start of April. They only hold their blushing blooms for a couple of weeks and as a result, have become a symbol of renewal and the fleeting nature of life.

To celebrate and honor the sakura, the Japanese hold hanami parties by picnicking under the blooming trees from morning through evening. If you have the opportunity to visit Japan during this period, you’ll witness thousands of people gather in parks, socializing over sake, tea, and bento boxes. Many local department stores and restaurants will even sell special edible treats created especially for this event.

An ideal spot has shade, comfortable ground, and views of the blossoms. When in Japan, make sure that the park allows picnicking and that the space does not require a reservation. If reservations aren’t required, grab a spot early as the Japanese tend to camp out all day long.

The trees are to be honored and admired for their ephemeral beauty. As pretty as they are, they are delicate. Don’t disrespect trees by pulling on the branches, climbing them, or picking off the blooms.

Come prepared with a water-resistant picnic sheet – such as a tarp – as the ground can be quite damp and cold in early spring. Most hanami-goers also bring cushions or folding chairs for extra comfort. Pack food that can be stored, shared, and consumed at room temperature easily. If you want to sip on sake or alcoholic beverages, make sure it’s legal to drink in public. A pack of wet towelettes will keep hands clean before and after the meal.

And remember: April weather can be fickle so have an umbrella and warm clothes on hand in case of a climate shift.

Leave No Trash Behind

Another important thing to pack? A garbage bag! Visitors are expected to clean up after themselves and not all parks offer large disposal bins.

Know Where the Restrooms Are

It’s inevitable you’ll need to use the loo after a few hours of eating and drinking. Know where restrooms are located and bring your own toilet paper – some Japanese parks don’t offer it or may run out with the large crowds. Speaking of crowds, expect long lines to the bathrooms. In other words, don’t wait until the last minute to do your duty or you may regret it.

For many people, cherry blossom season (sakura season) is the main reason for visiting Japan.

The Importance of Sakura Season

The delicate flowers of the cherry tree appear around the beginning of spring providing subtle colours after the winter and marking some important changes in the lives of many Japanese, as it also marks the time they start new schools, or careers.

One aspect that makes the cherry blossom season special is that it is often short, therefore, having a good forecast of when the best blossom will appear is a matter of interest for local Japanese people and visitors alike.

The official declaration of flowering (kaika sengen) is linked to a particular set of cherry trees in Tokyo of one particular type (the trees are a closely guarded secret). However, this forecast does not take into account that there are more than two hundred different varieties of cherry trees in Japan, and the blossom of other trees (plum and apricot) are often as beautiful. Suffice to say, there is lots of variety.

The other major factor in cherry blossom viewing is that the country stretches across hundreds of kilometers south to north, and also has significant differences between coastal and mountainous regions.  This means even the official forecasts span not just weeks, but several months.  And that does not even count the special early blossom varieties, or the more unusual types that blossom during winter.

When are the cherry blossoms in Japan?

You can tour around Japan criss-crossing the country and the blossom front travels up the country.  Typically you could spend six weeks from mid-March to the end of April enjoying cherry blossom.  For the early stages of flowering you can also see plums (which starts much earlier), and also witness the beauty of double flowers, some of the large blossom varieties, and also head to many non-tourist locations where people can really enjoy the hanami experience.

The official Japan Cherry Blossom Association has a list of its 100 top sites.  While a cascade of many trees and full bloom is impressive, some of their featured locations only have a single tree.  Still, with a top 100 and thousands of parks and even more thousands of cherry trees, seeing cherry blossom Japan is certainly not a one week affair.

April: chasing the cherry blossom across Japan we had seen blooms in Kyoto, Tokyo, Takayama, Kanazawa and Nagano.

However, heading north to Sendai saved the best until last!

A short train ride outside of Sendai is the small town of Ogawara (about 20,000 people). It’s secret is that the river banks have been planted with 1,000 cherry trees and makes for a truely inspiring sight as you can walk along the banks of the river, appreciating their beauty.

The useful point to be aware of when looking at the Japanese Cherry Blossom Forecast is that it applies to a particular type of cherry tree – the ones with the simple five petal flowers.  Fortunately, there is range of cherry trees and this extends the season by several weeks later.

However, knowing the locations of the late blooming trees is handy.

Top tip: Book the Japan Rail Pass for getting around Japan. You can get a 7, 14 or 21 day pass. Book online.

Visit Kazakhstan – Where Old Meets New on the Ancient Silk...