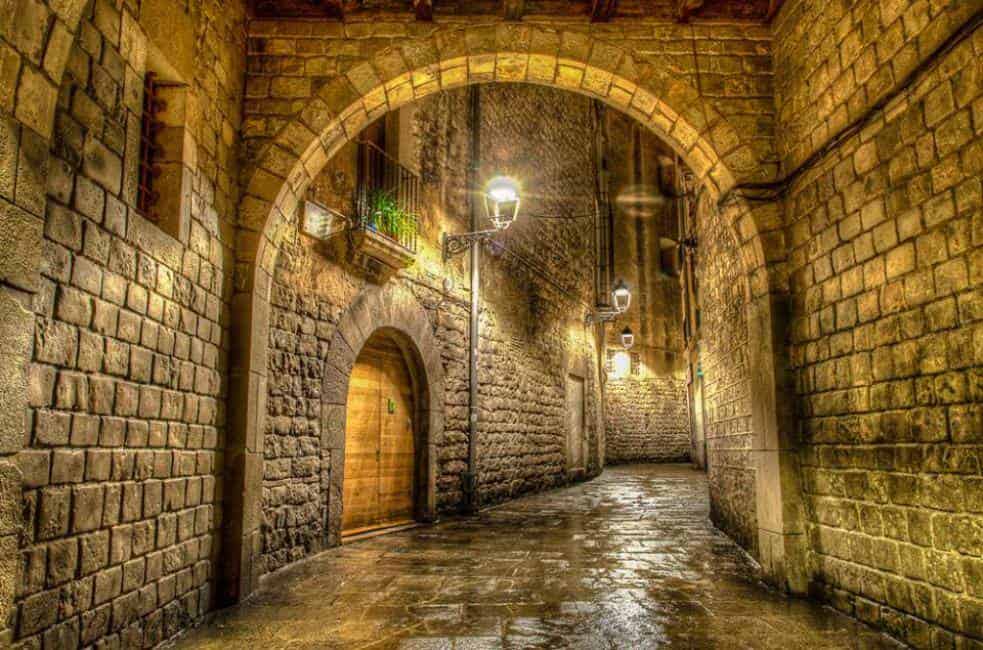 Psst… Do you want in on a little secret?

Good, because some of the most interesting places in Barcelona are often not cited in typical travel guides and like many cities it has a few hidden hush-hush aspects that need to come out. There’s a whole world of hidden secrets of Barcelona to explore!

We have compiled a list of undercover facts and off-the-tourist-trail attractions that may just turn your city break into the trip of a lifetime! We know all the hidden secrets of Barcelona!

If you’re looking for some amazing secret hang-out spots, then read on to find out our top recommendations.

If museums are your thing you may want to listen up! Rumor has it that Sunday is the perfect day for your brain to be stimulated and your wallet to remain in your pocket. Several of Barcelona’s museums and galleries offer free entry on Sunday afternoon after 15:00.

If you can’t make it on a Sunday, then make sure to get your museum ‘skip the line’ pass before making your way to the museums.

In 1937, after Franco’s army bombed Barcelona, shelters were set up in both basements and metro stations. Refugio 307 is one of the better examples of the many shelters built and simultaneously commemorates life and death during the tragic attack.

Refugio 307 now lies at the bottom of Museu d’Historia de la Ciutat. The display of living conditions, toilets, a drinking fountain and the infirmary may be difficult to take in, but it is an interesting example of people’s effort to survive in the face of misfortune.

As secrets go, there is always one that at first glance seems particularly strange, but is completely worth the experience. For Spain, this comes in the form of the milky-looking drink horchata, a unique concoction made from chufas (tigernuts) water and sugar, all topped with cinnamon.

This acquired taste may live somewhat in the shadow of sangria, but it is certainly better for your health, as it contains high levels of iron and potassium, is very low in fat content, and is valued for its minerals and vitamins. One of the healthy hidden secrets of Barcelona…

The winding streets of the Old Town of Barcelona have so much more to offer than the occasional authentic tapas bar. These medieval, off-the-grid alleys are home to ancient Roman walls, the oldest synagogue in Europe, a shoe shop visited by the likes of Catherine Zeta Jones, a candle-maker’s that’s been around since the 1700s… Interest piqued yet? Getting ‘lost’ in the labyrinthine Gothic Quarter will certainly make for some unforgettable discoveries. Discover more of hidden Barcelona by getting lost!

Now it may not be a big secret that the classic, long sugar doughnuts known as churros served as a Spanish indulgence and are best appreciated during the colder months of the year. But what you may not know are the best places in which to partake in the hot chocolate and churros ritual.

Some of our favourite spots are la Nena in Gràcia (C/ Ramón y Cajals 36), Churrería Layetana (Via Laietana 46), and Granja Dulcinea (C/ Petrixol 2) the last one being one of the oldest spots to enjoy the treats in Barcelona. And boy do they have it down to an art…

For even more chocolate adoration, get a ticket to the chocolate museum.

Are you frantically searching the Internet for seats to the upcoming FC Barcelona home game but can’t seem to find any available? Allow us to let you in on a little secret, check out www.fcbarcelona.com where season holders release their tickets closer to the actual date rather than months in advance. You’re welcome! You can also buy several tickets for other Barcelona attractions online before you go – this could save you both money and time!

This 14th century Gothic-style monastery allows you to take a step back and appreciate religious art and relics in Barcelona. A sight well off the beaten track but definitely worth seeing, this is one for those looking for something to fill a warm spring afternoon, without the hustle and bustle of Las Ramblas.

The cloister has three floors with a gorgeous garden view of palms and the renaissance fountain in the serenity of the courtyard. You won’t find a more serene place in all of Barcelona.

The Bunkers del Carmel is arguably the best viewpoint of the entire of Barcelona, with a 360° panoramic view of the city. The Bunkers are found at the top of Turó de la Rovira, in the Carmel district, to the north of the city. Locals, and those in the know-how, love to come here at sunset with some drinks and food, to sit and admire the breathtaking views.

The bunkers were built during the Spanish Civil War in 1937 and were used to defend the city against aircraft attacks from the fascists. When the Civil War ended, the guns were removed but the bunkers remained. Due to the poverty caused by the Franco Regime, many locals used the bunkers as housing, turning into somewhat of a shanty town. No one lives there any longer, and it has become a beautiful spot to remember the sad history, but also to take in the stunning cityscape of Barcelona.

These pools are found on the Montjuïc hill and were the location of the diving events of the 1992 Summer Olympic Games. First built in 1929, but refurbished for the Olympics, the pools are truly a sight to behold. They have a stunning backdrop of Barcelona, with Tibidabo, Sagrada Familia and Torre Agbar all visible while you take a dip in the enormous pool under the hot sun.

The facility is open from the start of July to the beginning of September, and costs only €6.50 for entry for the day, with under 5-year-olds going free. The diving section is closed to the public, but the other pool is available for use all day long. If you choose to head here to escape the beating Barcelona sun, remember to bring a thick towel to lie on as there aren’t any deck chairs!

Located nearby to the Mirador de Mundet, but not easily accessible by public transport, is an idyllic swing that overlooks the whole of Barcelona. Step back into childhood nostalgia and take a trip up to the swing to see Barcelona from an angle that little have seen before.

There is a plaque by the tree with Barcelona’s skyline, and the words “Un lloc des d’on veure els teus somnis” which translates in English to “A place where to look to your dreams”. Let your inner child come out to play and feel the Mediterranean breeze blow out the cobwebs.

Another great spot for a swim, whether it be an icy winter dip or in the summer heat, is the outdoor swimming pool at Banys del Fòrum. It is unconventional compared to the other pools and beaches, as it becomes a mix of the two by being a saltwater ‘pool’!

A stretch of the beach has been transformed into a huge, but shallow, saltwater swimming pool. If you hate sand and chlorine, this is the spot for you! Rocks and floats fence off this part of the ocean, with steps down to access the water. It’s also wheelchair accessible thanks to the availability of a hydraulic chairlift and an assisted bathing service.

Antic Teatre is a secret bar in the El Born neighbourhood, just a minute’s walk away from the iconic Palau de la Música Catalana. A local’s favourite secret, this beautiful bar is hidden down a narrow street with an unsuspecting entrance.  Head up the stairs to a terrace area, and the main area below which is a beautiful garden with willowing trees in the centre!

The crowd here is locals, artists and hipster-type people, all enjoying the beautiful scenery and the cheap drinks. Here you can buy a beer for €2 and a glass of wine for €3! The best time of year is to visit during the warm summer months, but even in winter this is a great spot to sit and catch up with your friends.

Formerly a water tower in the Eixample district, the Jardins de la Torre de les Aigües is an inner-city beach area, with two shallow pools, sand and benches. Located just two blocks away from the iconic Passeig de Gràcia, this is truly a hidden gem of the city unless a local lets you in on the secret!

Open all year round, but in high season from the end of June to early September, the Jardins have a lifeguard, showers, toilets and are just €1.55 to enter. This is a great choice for kids as the pools are very shallow, but can be fun for any age to escape the hot summer sun, without even having to head out to the beach.

Head to: Carrer de Roger de Llúria, 56, 08009 (and head down an unsuspecting alley to the side to find the Jardines de la Torre de les Aigües!)

If you want to learn more check out the fun online language learning tool from Babbel (you can try the first lesson for free!).

EXTRA: Do not forget a good travel insurance before you go. Check out the offerings from both World Nomads and SafetyWing.