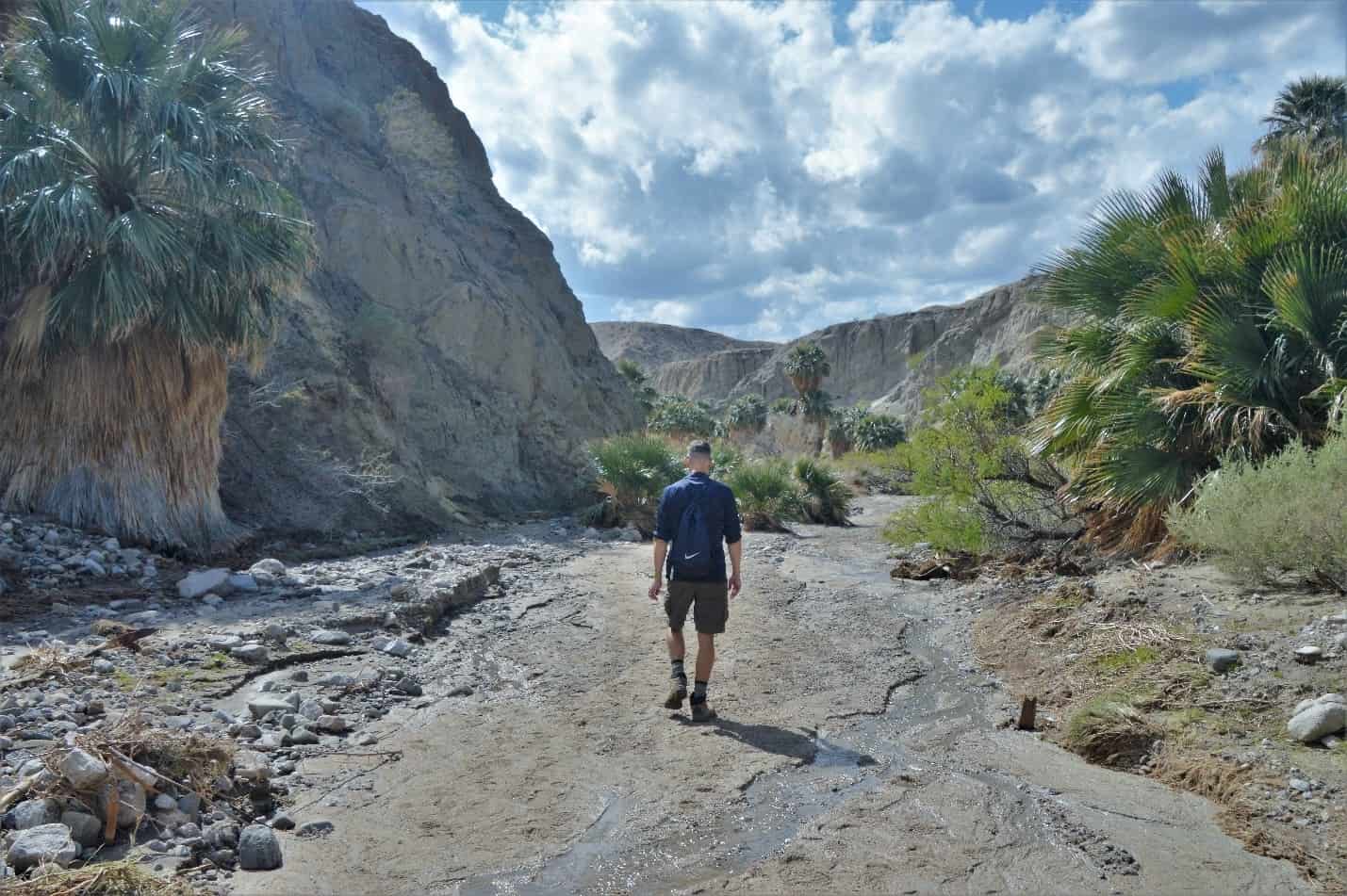 Southern California is full of amazing hiking opportunities, but perhaps few are as interesting as those that run along the San Andreas fault in the Colorado Desert of the Coachella Valley. There’s a few great San Andreas trails!

One of my favorite hikes along the fault is Pushawalla Palms Loop.

This hike offers different and amazing landscapes that were formed by earthquakes and tectonic plate movement along the fault.

Scientists have learned that the Earth’s crust is fractured into a series of “plates” that have been moving very slowly over the Earth’s surface for millions of years. Two of these moving plates, the Pacific Plate and North American Plate meet in western California; the boundary between them is the San Andreas fault. This fault forms a continuous narrow break in the Earth’s crust that extends over 1,000 km from northern California southward to the Mexico border. Usually, these plates slowly collide, separate and grind past each other at a rate of about 50 mm per year. However sometime the plates lock in position until the stress created by the plates overcomes the strength of the rock. At that point, the rocks fracture along the fault and seismic waves radiate in all directions, causing the Earth to vibrate and shake. An earthquake occurs as the plates move feet or tens of feet in just seconds.

Since this scenario has been repeated time and again over 40 million years, it’s easy to understand that land on either side of the fault have slid in opposite directions over 450 km since the plates first came in contact with each other. Over the millennia, these quakes have pulverized rocks, changed the flow of rivers, ground down mountains, and created new mountains, hills, canyons, and valleys. Here’s a close-up view of the San Andreas fault area. The red line marks the San Andreas fault, and the small black circle shows the location of the hike.

I love hiking and I’m Out of the office 4 good, and as much as possible. Here some general tips.

Even though this is a relatively short hike, remember you are in a desert environment. Being prepared will increase the chance that you have an enjoyable excursion.

Here are a few basic safety tips if you are new to desert hiking:

Pushawalla Palms Loop is a well-marked trail located within the 17,000-acre Coachella Valley Preserve Area near Thousand Palms, California. The trailhead is located less than 15 miles from Palm Springs on Thousand Palms Canyon Rd. There’s plenty of parking on the main road but be prepared for crowds on weekends. The trailhead is open year-round and there are no fees or permits required.

The trailhead is the starting point for several area hikes, so make sure to follow the Pushawalla Palms trail signs. For the first 0.5 km, the path winds its way through a dry stream bed know as a wash. During the brief fall and winter rainy season, washes like this provide drainage channels for surrounding hills and mountains. These rains help to disperse wildflowers seeds which root in the sandy soil as the water slowly evaporates. Come spring when the grounds warms, the seeds sprout and the trail is lined with purple, yellow, and white wildflowers. This is not the image most people have of the desert. The wildflowers draw large crowds in the Spring, but fortunately, most people only hike a short portion of the San Andreas trail to view the wildflowers.

After walking through the wash, the trail begins climbing Bee Rock Mesa. This mesa and the surrounding hills are wedged between two faults that have squeezed and uplifted the rocks and gravel to create this straight line of sharply defined hills along the fault.

The trail winds its way along the ridge of the mesa. Although this is not a knife edge, be careful since there is a 90-100 meter drop off on either side of the San Andreas trail. Enjoy your walk on the mesa; take in the sweeping views knowing that 3+ miles directly beneath your feet is the San Andreas fault.

After hiking 1.6 km, the Horseshoe Palm grove appears on the right-hand side of the trail at the base of the hill. This long string of palm trees extends over 1.5 km. These palms flourish in the middle of the desert because the fault beneath us has pulverized the bedrock allowing groundwater to seep close to the surface and nourish these trees. It’s not uncommon to see a straight line of palm trees or other vegetation growing along sections of the San Andreas fault.

The path follows the ridgeline for 2.5 km. By now the crowd will have significantly thinned out with most people returning to their cars. Unfortunately, these people assume the wildflowers in the wash are the best part of this San Andreas trail – they are so wrong.

Over the next 1.25 km, the trail begins a gradual descent to the floor of the Pushawalla Canyon. A section of the trail has been heavily eroded by recent rainstorms. This isn’t a difficult area to navigate but it does require more careful footing.

After 3.2 km of hiking, you emerge on the floor of Pushawalla Canyon and are almost immediately surrounded by a lush green environment. In both directions, for as far as the eye can see, there are the Pushawalla Palms. Why is it called Pushawalla? Legend has it that Pushawalla was the name of a local Native American who lived to be over 100 years old. Allegedly he died when a summer cloudburst flooded the canyon he was in and swept him away. The canyon where he was found is called Pushawalla Canyon.

The California Fan Palms are the only palm tree native to the United States. The telltale sign of the California Fan Palm is the “skirt” of old dead palm fronds that cascade downwards around its trunk (rather than dropping off like other palms). Be careful walking around the fallen palm fronds. They’re often used by rattlesnakes for cover and shade; snakebites have been reported in the Pushawalla Palms area. It’s worth repeating, respect desert wildlife.

You can explore Pushawalla Canyon in both directions. Underground fissures caused by the San Andreas faults provide groundwater in the canyon an easy route to the surface. You’ll notice a small stream flowing on the ground. The stream often mysteriously disappears into the sand and then reappears further down on the trail. Be on the look-out for rabbits, coyotes, and all kinds of birds who are drawn to the water.

Often it feels more like you are walking through wetlands with tall grasses and vegetation encroaching on the trail. It’s strange that this beautiful desert oasis was created by faults and earthquakes that we normally only associate with damage and destruction.

After exploring the palm oasis, it was time to head back. There are several options you might want to explore. For our return we chose to climb out of the canyon via the rock gully that we had used to descent from the ridge and then follow a trail to the base of the hills. Walking on the desert floor provides a new perspective of the terrain. As we passed the Horseshoe Palm grove, we had a clear view of several people hiking on the ridge San Andreas trail above us.

As we hiked further away from the hills, the vegetation became sparser. But remember, the interesting thing about the desert is that it hides its beauty so well.

If you are hiking in the late winter or spring be sure to move slowly and look carefully. You will find a variety of small and large flowering plants and maybe even a lizard or two along the trail.

After hiking on the desert floor for slightly more than 1 km, we climbed back up to the ridge and made our way to the car.

For this hike we logged 10 km, but various maps indicate typical lengths ranging from 6-8 km. Our excess mileage was due to our extensive exploration of Pushawalla Canyon. Even with a stop for lunch and photos, we completed the hike in 3.3 hours. In the satellite image below, the red dot marks the trailhead, and the green dot marks the intersection where we rejoined the ridge from the desert floor on our return route.

Hiking along the San Andreas Fault in the Coachella Valley is not about finding the “giant crack in the ground”. Millions of years of erosion have piled upwards of 3 miles of gravel and rock debris on top of the fault. Although the fault is buried, you know now that it’s easily visible by following the strip of green vegetation that runs in a straight line against an otherwise bare series of hills and brown desert washes. Hopefully, this information will encourage you to explore the San Andres Fault and Pushawalla Palms on your next visit.

There are countless resorts, boutique hotels and apartments to stay at in the Greater Palm Springs area. Except during the Coachella and Stagecoach music festivals in April, obtaining a booking should not be a problem.

Because the Greater Palm Springs area is such a tourist draw. There are eateries to meet any need.

Here are a few of our favorite spots to enjoy an after-hike dinners:

Where to Stay in Tulum: Budget Beachfront Accommodation

Things to Do in Joshua Tree National Park

How to Be a New York Tourist: Do’s and Don’ts

The Most Annoying Things Airline Passengers Do