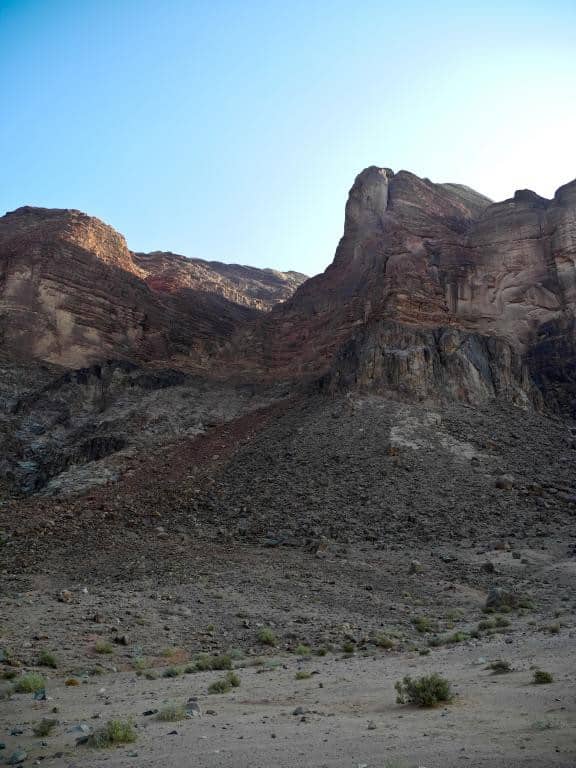 You’ve arrived on the moon and you are looking for an amazing experience and you want to survive it.

Welcome to Wadi Rum in Jordan!

Wadi Rum is also known as “The Valley of the Moon“ and you will for sure feel a bit like it. OK, how do I know how it is on the moon? I have no idea, but I guess it’s an unreal landscape and no sound. Do you agree?

That’s what you can expect of Wadi Rum. The landscape seems unreal and fascinating. Flat desert and amazing mountains, rocking out of the ground. Sounds? You might hear the one or other jeep, but just get around another corner and there will be complete silence!

Experience that silence with an amazing view and a kick of adrenaline by going hiking in Wadi Rum.

Wadi rum spreads over 74,000- hectares, with a mix of natural and cultural sites, situated in the south of Jordan close to the Saudi Arabian border.

Geologists think that this Wadi (the Arabic word for “valley”) resulted from a great crack in the earth’s surface which was caused by an enormous upheaval that shattered mammoth pieces of granite and sandstone ridges from the mountains of the Afro-Arabian shield. These ridges can reach up to the height of 1000 feet with smooth domes topping them, worn out by the desert winds.

This magnificent natural work of art is a UNESCO world heritage site, with inscriptions and archaeological remains that testify to 12,000 years of human occupation and interaction with the natural environment, as you have the combination of 25,000 rock carvings with 20,000 inscriptions that trace the evolution of human thought and early development of the alphabet.

Wadi Rum is also known as The Valley of the Moon. The name Rum is thought to come from Aramaic root meaning ‘high’ or ‘elevated’. It has been inhabited by different cultures since prehistoric times. The Nabateans left their mark on rocks with temples, graffiti and paintings. The fresh water springs found there made Rum a meeting centre for caravans heading toward Syrian and Palestine.

Resent excavations in the south have uncovered a Caleolithic settlement dating from 4500 BC. On a hill at the foot of Jabal Rum, lies the Allat temple which was originally built by the Ad tribe and was remodelled by the Nabateans in the first century BC.

As Rum is an important tourist site, it is also an important site in the history of the Arab revolution, as it was the headquarters of Prince Faisal bin Al-Hussein and T.E Lawrence during World War One to fight for the Arab Revolt against the Ottoman Empire. This enigmatic British officer has become a legendary figure for his role in the fight for the Arab cause, and he made this magical place his home from 1917 till 1918.

In the 1980s one of the rock formations in Wadi Rum was named “The Seven Pillars of Wisdom” in memory of his book. He says in his book: ” All men dream: but not equally. Those who dream by night in the dusty recesses of their minds wake in the day to find that it was vanity: but the dreamers of the day are dangerous men, for they may act their dreams with open eyes, to make it possible. This I did.”

Most of the movie “Lawrence of Arabia” was shot there and a number of other movies as well like:

Hiking in Wadi Rum involves climbing the highest mountain of Wadi Rum from one side and abseil on the other side.

Get prepared for a tough climb! Don’t go for it, if you are not fit! Serious! I’ve done some hikes already, but that one in Wadi Rum was and will stay special!

Important, do this hike with a guide, as he knows the way and can help you to cross more difficult parts by giving you the one or other advise.

Start in the middle of the night at 8 am (hahaha). You and your guide will get driven on the other side of the mountain and that’s where your adventure begins. Expect 2,5 – 3,5 hours of just climbing. You’ll have to master 700 meter difference in altitude. There is no direct path and several times you’ll be walking or climbing right at the edge with a deep drop right next to you.

You’ll get a lunch package and you’ll need it. Try not to eat and drink it all at the first break. On the way to the top you’ll be in tiny canyons, which are little oasis. You’ll find here and there a tree and even very old paintings.

Already with the first stop, you’ll experience… Nothing… Serious… There Is No Sound!

Wait, that’s not completely true. I heard my own heart beat and once a fly. I also ate a biscuit and the sound of the chewing disturbed the silence!

I hope you can take the silence and don’t freak out. If you should, get on your feet and keep on climbing. The way to the top is still long.

With a lot of luck you’ll see a bock or gazelle. But don’t expect it, as they are very rare and very shy.

Don’t forget to take your camera! You’ll have awesome views!

If you are quick, you’ll be at the top around noon. Now it’s time to have lunch on the top of Wadi Rum. There are not many destinations on earth, where you will able to enjoy a sandwich with such a view. And there won’t be many people who will say that they had lunch on Wadi Rum’s tallest mountain. It’s not a hike for everybody!

Everything which goes up, has to come down, right?

What could be better than using the chance and to do some abseiling?

You’ve never done it? No worries! It’s much easier than you think! Your guide will help you! All you need to do is, to be able to knot the rope the right way, which is very easy. Then of course, you shouldn’t be afraid of heights, as you have to lean yourself back into canyons with drops up to 45 meters vertical down.

Amazing! Fun! Go for it!

You’ll abseil on the side of Wadi Rum village and should arrive there around 5 pm.

Just about the right time to finish the day with a real Bedouin experience!

If you don’t feel like hiking in Wadi Rum, then you can always just hop into a 4X4 and do a tour of the desert with a guide.