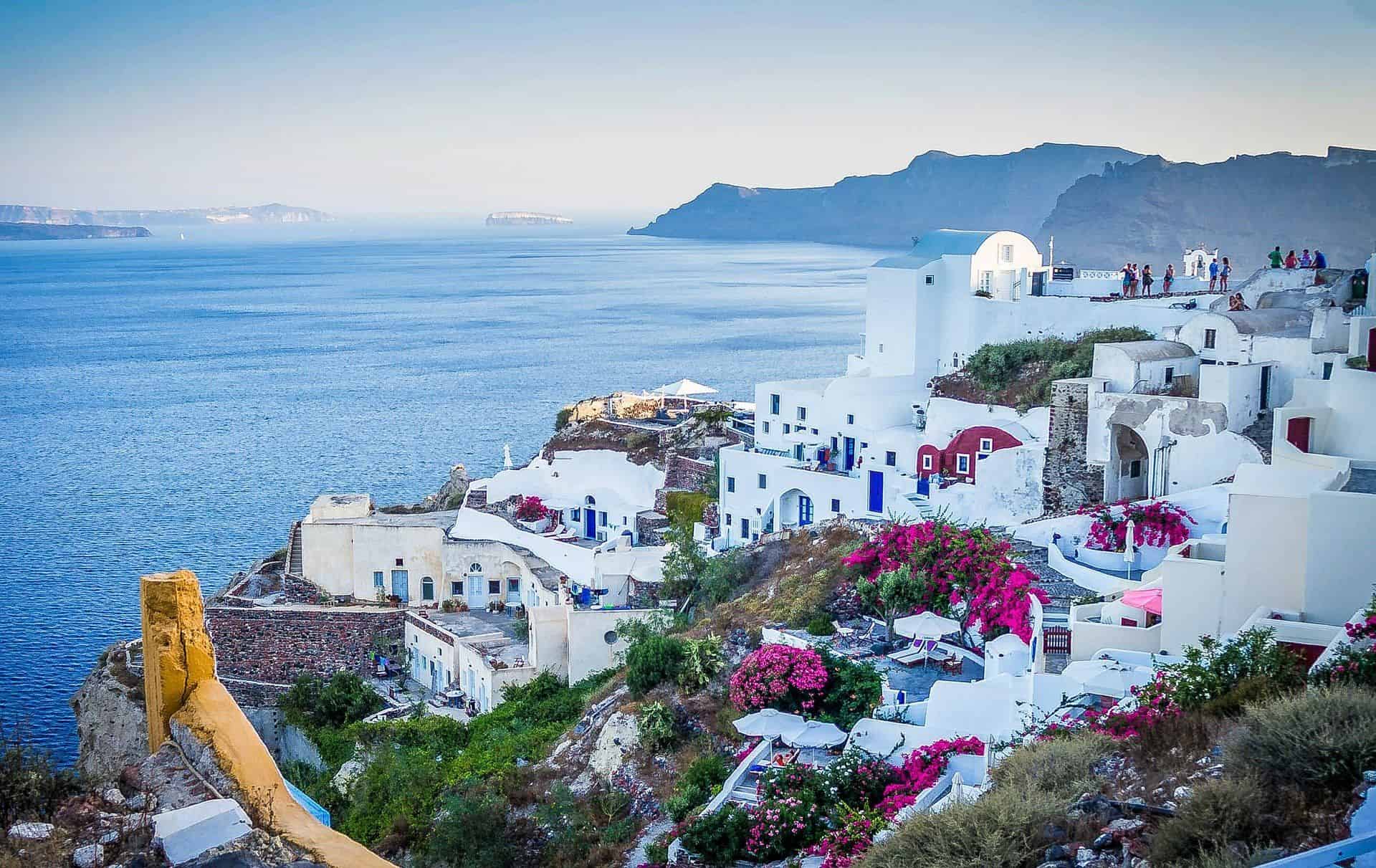 With 6,000 islands in total (though only 227 that are inhabited), there are plenty of Greek islands to hop around on.

From islands renowned for their beautiful beaches and natural features to islands catering for the party lovers, there’s something for every kind of traveler. Which is why we’ve created this guide to island-hopping in Greece, to help with getting the best out of your Greek island-hopping experience.

Most of the islands have a pretty laid-back culture, with emphasis on relaxing while enjoying the beautiful scenery, delicious food, bountiful drinks, and the bathwater-warm Aegean Sea. Some are a bit more touristic, which helps a lot with finding English speaking assistance.

A Guide to Island Hopping in Greece

The 6,000 islands are scattered across the eastern Mediterranean. Most are in the Aegean Sea (south and east of mainland Greece) while a few others are in the Ionian Sea (west of the mainland).

There are seven clusters of islands: Cycladic Islands, Crete, Ionian Islands, Saronic Gulf Islands, Sporades Islands, Dodecanese Islands, and North Aegean Islands. It’s a good idea to know which cluster of islands you’d like to explore, then depending on how much time you have available stick within the cluster.

Due to the close proximity to Athens, the Cycladic Islands are generally the most popular of the island clusters. This cluster also includes the very popular (and touristy) Santorini, Mykonos, and Paros islands. These islands portray the typical ‘Greek island’ look with whitewashed houses with blue doorways built along rocky hillsides. Santorini is well-known for being one of the most romantic of the Greek islands. While both Ios and Mykonos are popular partying destinations. Koufonisi, on the other-hand, is the main attraction of the Little Cyclades.

Crete is Greece’s biggest island which is practically a ministate of its own. While many of the other islands can be enjoyed within a day or two, Crete deserves at least a week to properly explore. The main attractions here include the Minoan ruins, scenic mountains, inviting beaches, charming rustic villages, and dramatic caves and gorges (including the famous Samaria Gorge). Driving in Crete is also a great idea to get to explore the different areas of the island.

These islands are closer to Albania and Italy than Athens. The main island in this cluster is Corfu, with a buzzing main town and beautiful green landscape, with several attractions and beaches. Corfu has a very British vibe, particularly due to the many holiday packages sold from the UK. The two smaller islands of Paxos and Antipaxos can also get quite busy during high season, while Lefkada is the least touristy of the lot.

The Saronic Gulf islands are the closest to Athens and can be reached in an hour or less by highspeed boat. This makes them perfect for day-trips for travelers staying in Athens. The islands here each have their own unique characteristics: Hydra is best known for its beautiful architecture, Poros is great for sailing, Aegina is perfect for family holidays, and Spetses shows off elegant mansions.

The Sporades Islands are east of Athens, which is mostly dominated by the big Evia island. Evia Island is connected to the mainland via a bridge. The Sporades are less popular with international tourists and more popular for weekend getaways amongst local Athenians.

On the southeastern end of the Greek islands, you’ll find the more rustic and less developed Dodecanese Islands. With their proximity to Turkey and historic ties to Venice, they have a slightly Turkish-Venetian vibe about them. Rhodes is the biggest island of this cluster.

If you’re looking for a remote experience, then the North Aegean Islands are where you should head. These islands, located between Turkey and Thessaloniki, remain relatively unexplored and have a proper remote-feeling about them.

Traveling between the Greek islands

Some of the larger islands, like Crete, Santorini, and Mykonos, will have their own airports which you can then fly directly to. The islands of Rhodes and Corfu have the largest offering of flights (both international and domestic). However, if you’re going to be island hopping then the easiest and most economical way to get around is by ferry.

Typically, the islands within the same cluster are located along the same ferry line routes, which is why it is easiest to stick within a chosen cluster for hopping around.

There is a variety of different ferry companies serving the different parts of the islands, where prices and schedules can vary quite a bit. You will need to research which islands you want to visit and which ferry company will best serve your route.

Understanding the Greek ferry system is not as simple as you would think. It’s recommended to check the various schedules online before you go to best plan your route. You can then book your ferry tickets online. The Hostelbay Greek Island Hopping Pass is an e-pass, so you won’t have to print out the ticket as you can just show your ticket on your mobile phone to board the ship. You may have to print out your tickets or collect them from the Port for some of the other service providers. Once your ferry tickets are booked and confirmed, you can then go ahead and book your accommodation.

You should also not underestimate travel time between the islands. Many are spread out across the Mediterranean and can take a while to reach – particularly if you’re traveling between the different island clusters.

Accommodation across the Greek islands range from chic designer hotels and large resorts to rustic guesthouses and quaint B&Bs. You can expect the white-washed circular buildings built on hillsides with the most spectacular views on the more touristy islands.

During the high season (between July to September), accommodation can book out quickly so make sure to secure your accommodation well in advance. You should also expect to pay inflated prices during this season – sometimes double the amount compared to out-of-season prices.

You’ll find that most decent accommodations will have their own swimming pool and sun deck area which will be great for spending lazy days at.

Christmas and New Year in Barcelona