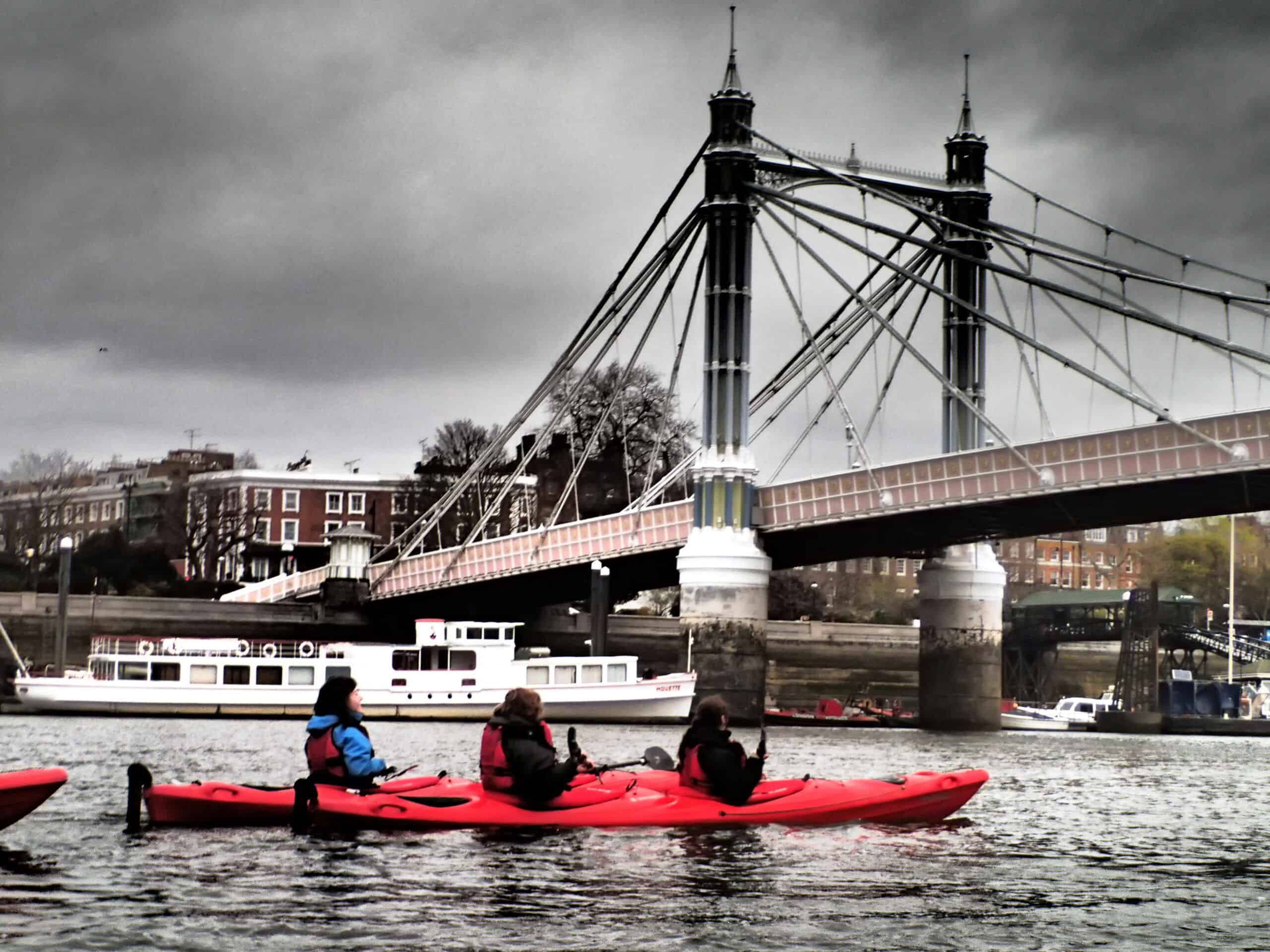 Before leaving London I’ve been wanting to do something touristy as one last thing to do in such an amazing city.

It’s very easy in London to forget what is around you.

I often find tourists in London a general nuisance – walking slowly, getting lost, raising prices etc. which is probably pretty two faced of me given I probably do similar when visiting other places. It’s because of this I tend to avoid areas around Westminster and the South Bank despite this being a really attractive part of the city.

You can probably imagine how pleased I was when I heard about kayaking on the Thames down to the Houses of Parliament. I quickly booked tickets to try!

Kayaking on the Thames in London

The paddle starts from Chelsea yah, and departs to coincide with the last of the outgoing tide before it starts coming back in to help you back upstream. Unfortunately the weather was looking pretty miserable when we arrived but from London in March that’s life. The instructors were super excited, encouraging us to draw slogans on the two man kayaks decked out in green tape for the day.

Once we’d got our gear on (waterproofs and lifejackets are very unflattering) and been talked through the basics of kayaking on the Thames we were in the water. And very dirty water at that, as I put my paddle in I could see a party popper, empty crisp packet and a tampon …. grim.

It did make a good incentive not to fall in the water, highly unlikely I’m told.

The actual kayaking itself is very easy, apart from perhaps a few steering issues (we had a tendency to go left very easily!) It’s an very different experience seeing a city from a river, the paddle took us alongside Battersea Power Station, one of London’s industrial relics soon to be regenerated into the one of the next areas of property, commerce and culture.

A bit further along the river the riverbanks become more affluent with people starting to notice about 30 people paddling down the Thames while the river gets busier and tourists on boats start to get their cameras out. I can’t help but think we were having a better time!

By the time we reached the Houses of Parliament bang on time, Big Ben was striking 4 O’Clock from which the loud chimes sent shivers down my spine. It felt great to be experiencing something so many people associate with London which after 18 months in the city I had actually done.

As we waited for the tide to turn and admired the scenery we noticed quite a crowd gathering on Westminster Bridge and the South Bank to take pictures of our group. Even people on the London Eye were pointing their cameras at us rather than the skyline of the capital.

The trip back up river was a little more challenging!

You could feel at first the lack of tide helping you along the river making for harder work on the arms which were starting to tire in the cold. It now became more about the kayaking than seeing the sights as we had already taken most of them in on the way down. Now we were getting better at going in a straight line and were probably more confident and capable than before.

However upon arriving back at the dock and after hauling the boats out of the water the Guinness was waiting for us!

I’d thoroughly recommend Kayaking London to anyone else.

Here’s a few other touristy things for locals to enjoy in London:

Tours of the Scottish Highlands: What to Expect

Trending Destinations: Under the Radar Places to Travel to