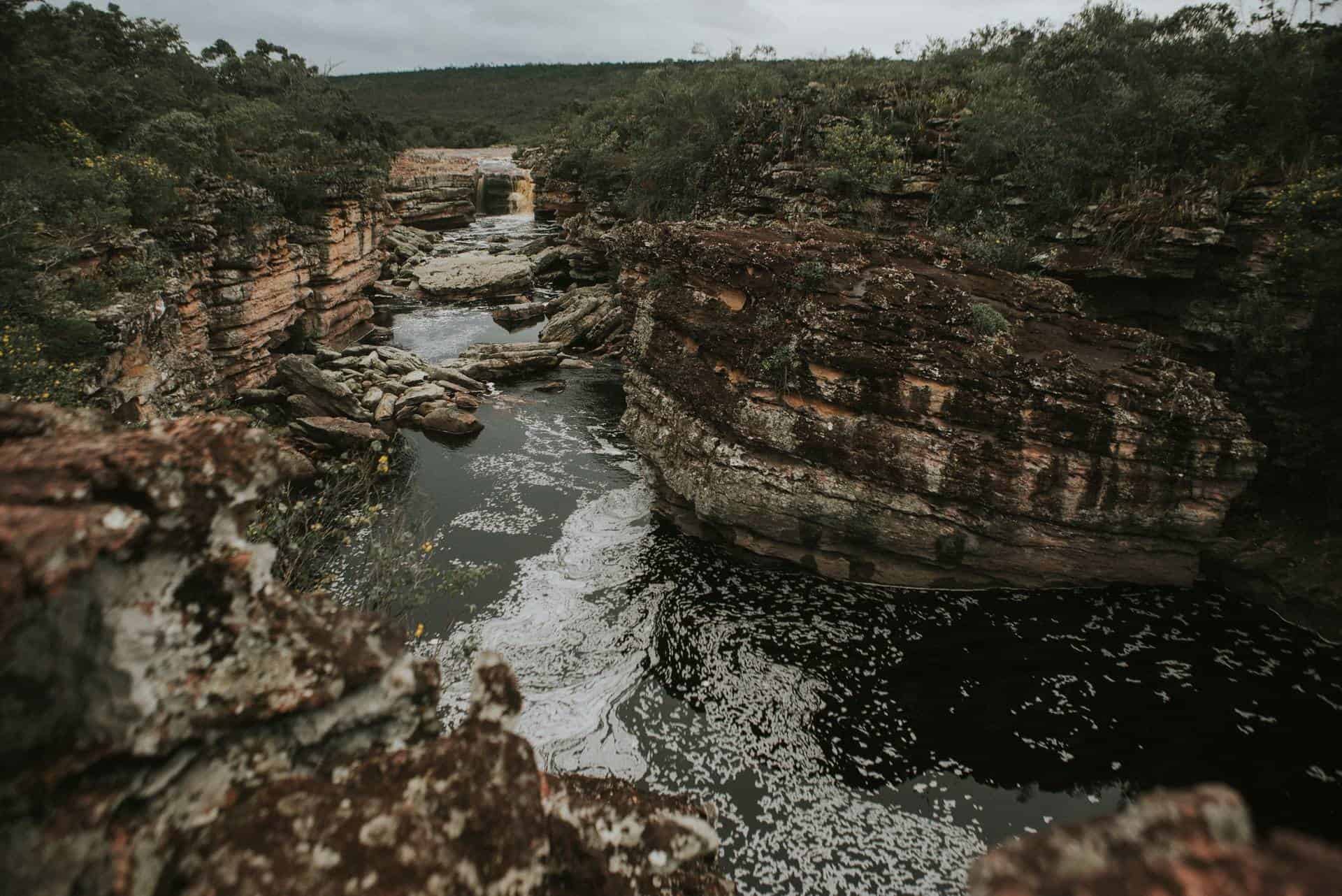 Being a motorcycle traveler, for me, “a place” is not as much a city or a village, but rather a region where I travel through.

Most of the time I get tons of information about interesting things or places to see on the go, from local people, and that is how you come across some of the most amazing places.

Since I moved to Brazil two years ago, I traveled tens of thousands of miles around the country, mainly in the south-east region, but also parts of the South and north-east, to find interesting routes for my Motorcycle travel company. During the many days on the road, traveling as much as possible on small back roads instead of the major highways, I saw many different regions in Brazil.

The extravagancy of Rio de Janeiro or “Gringo Paradise” Búzios, the mountains and lush coastal forests of Rio de Janeiro and São Paulo states, Unspoilt beaches, tropical Islands, the Banana, pineapple and coffee plantations in Espirito Santo, the countless waterfalls, the canyons of the Chapada Diamantina in the interior of Bahia…

Related Read: A Safety Checklist for Renting a Motorbike Anywhere in The World

Brazil has so much to offer if you just take the road less traveled.

Using a motorcycle for traveling, besides being the most fun way to wonder around a country like Brazil, has a number of advantages. You are the one in control, you always have a front row seat, you are one with the surrounding scenery and thanks to the fact that you HAVE to stop every 150-200km to take gas, eat, go to the bathroom, etc…, you get to know places and people that are still pure, or not “contaminated” by tourism.

In almost every gas station, people will start asking where you’re from, where you’re going and start giving you tips on where to go or avoid going. This way you will learn very quickly that Brazil, despite being branded sometimes as a dangerous place, is no more dangerous than your average European country.

The people are amazingly friendly and hospitable, and always ready to help wherever they can, offering you a place to stay or inviting you to share their meal with them.

So here is a selection of five places or regions in Brazil that I would recommend to anyone visiting this great country. Of course, this is only the tip of the iceberg…

Best regions in Brazil for motorcycling

Located about 200km west of Rio de Janeiro, on the border of the states Rio de Janeiro and Minas Gerais, Itatiaia was the first National Park of Brazil, created by President Getúlio Vargas in 1937. This 300km² park is surrounded by the much larger “Serra da Mantiqueira Environmental Protection Area”, which is almost 4.800km² in size and considered to be the green lung of Southeast Brazil.

Home to the third highest mountain in Brazil (pico das Agulhas Negras – 2878m), the park and the surrounding Serra da Mantiqueira, is a popular destination for backpackers, trekkers and rock climbers, but also mountain bikers. With around 250 different bird species, it is no surprise that also bird watchers are attracted to this beautiful park.

For me, as a motorcyclist, it is all about riding the dirt roads that are scattered around the Serra da Mantiqueira, connecting little picturesque villages like Visconde de Maua, Maromba or Pedra Selada, many of which see freezing temperatures and even snow during the winter months (July to September).

A two hour hike up Pedra Selada, a 1700m rock formation, rewards you with a great view of the surrounding area.

The “Costa Verde” (Green coast) is a 300km stretch of coastline between Rio de Janeiro and São Paulo, from Sepetiba to São Sebastiõ, offering all kinds of activities for the active – but also the less active – visitor.

This region in Brazil is a true paradise for lovers of ecotourism and extreme sports.

Riding along the coast on the BR101 (locally, also known as the “Rio – Santos”) in the direction of São Paulo, you have the most beautiful views of the Atlantic ocean and the many islands , while the whole time you have the Serra do Mar (a 1500km long mountain range that stretches from Espirito Santo until Rio Grande do Sul in the south of Brazil) at your right side.

At some locations, the mountains almost reach the ocean. Many people consider this the most scenic route of Brazil.

Along the 300km, there are many natural and cultural treasures to be discovered. In the bay of Angra dos Reis, you can get on a boat and cross over to Ilha Grande, an island Nature reserve, where no cars are allowed. A little further in the direction of São Paulo, you’ll find the small port town of Paraty, a jewel of Brazilian colonial architecture and world heritage site. This place is definitely worth a visit.

Further down the road, there is the quiet, laid back town of Trindade, with its beautiful bays and natural swimming pool. Just across the state border with São Paulo , the city of Ubatuba is famous for its great surf beaches …

Everybody has probably heard about the beautiful beaches and coastlines of Bahia, but few people know that one of Bahia’s major attractions is hidden in its interior. The region called “Chapada Diamantina”, also known by some as Brazil’s lost world. It’s one of the regions in Brazil that is most hidden.

With its weird and fantastic rock formations, a system of quartzite caves with crystal clear lakes and underground rivers, mountains and valleys with hundreds of waterfalls, this 152.000 hectare park is the perfect setting for some of the wildest eco-adventures in Brazil.

The only place that I personally consider a little too touristic for my likings – it is the second most popular tourist destination in Brazil – but cannot be discarded, is Iguaçu falls, or “Foz do Iguaçu”. This is the place where Brazil, Argentina and Paraguay come together and nature shows itself at its most beautiful.

A total of no less than 275 waterfalls, some of them over 80m high, along a distance of 2700m, create one of the most beautiful sights on the planet. The falls can be visited and seen from the Brazilian or the Argentinean side, and opinions differ about which side has the most beautiful views.

One thing is certain: whatever side you visit, this is a spectacle that you will remember for the rest of your life.

Surrounding the falls is a preserved jungle area of 156.235 hectares: the Iguaçu National Park. The history of the park begins in 1916 when Alberto Santos Dumont, the father of aviation visits the region. At that time the land was privately owned by an Uruguayan called Jesus Val.

Dumont pleaded with the President of the State of Paraná, that Jesus Val would be expropriated and the area made public property. Later that year, 1.008 hectares were declared public property, and later, in 1939, by decree of President Getulio Vargas, the area was enlarged to its current size of 156.235.77 hectares.

Whether on sand, asphalt or gravel, adventure is always guaranteed on the Estrada Real. Every other road has new discoveries.

Colonial villages, with their typical colorful churches, waterfalls, mountains, caves and rivers make up one of the most important cultural and natural heritages on the planet. Those who watch close enough can see the stone bridges, ruins and fountains scattered across the landscape. Every one a reminder, left behind by the colonial settlers.

The Estrada Real (Royal Road), today, is a collection of several roads, in total about 1512 km, located in the triangle Rio de Janeiro – Paraty – Diamantina, built in colonial Brazil, especially in the seventeenth century, to transport the riches of Brazil’s interior to the coast of Rio de Janeiro, from where it was shipped off to Portugal.

All transport of goods, machinery, gold and diamonds, but also slaves, tools and other supplies, was only legally possible via the Estrada Real. Opening new roads was considered a crime of lese-majesty.

Traveling through this unique region in Brazil offers a once in a lifetime opportunity to relive the experiences of the ancient pioneers, drovers, officers and other travelers that once roamed these parts. The great importance of this road gave birth to countless towns and cities, some of which, like Ouro Preto or Diamantina, are today listed as World Heritage Sites.

Check out our guide for backpacking by motorbike!

Things to do in Mendoza, Argentina

Salt Flats Uyuni, Bolivia: As Far As the Eye Can See