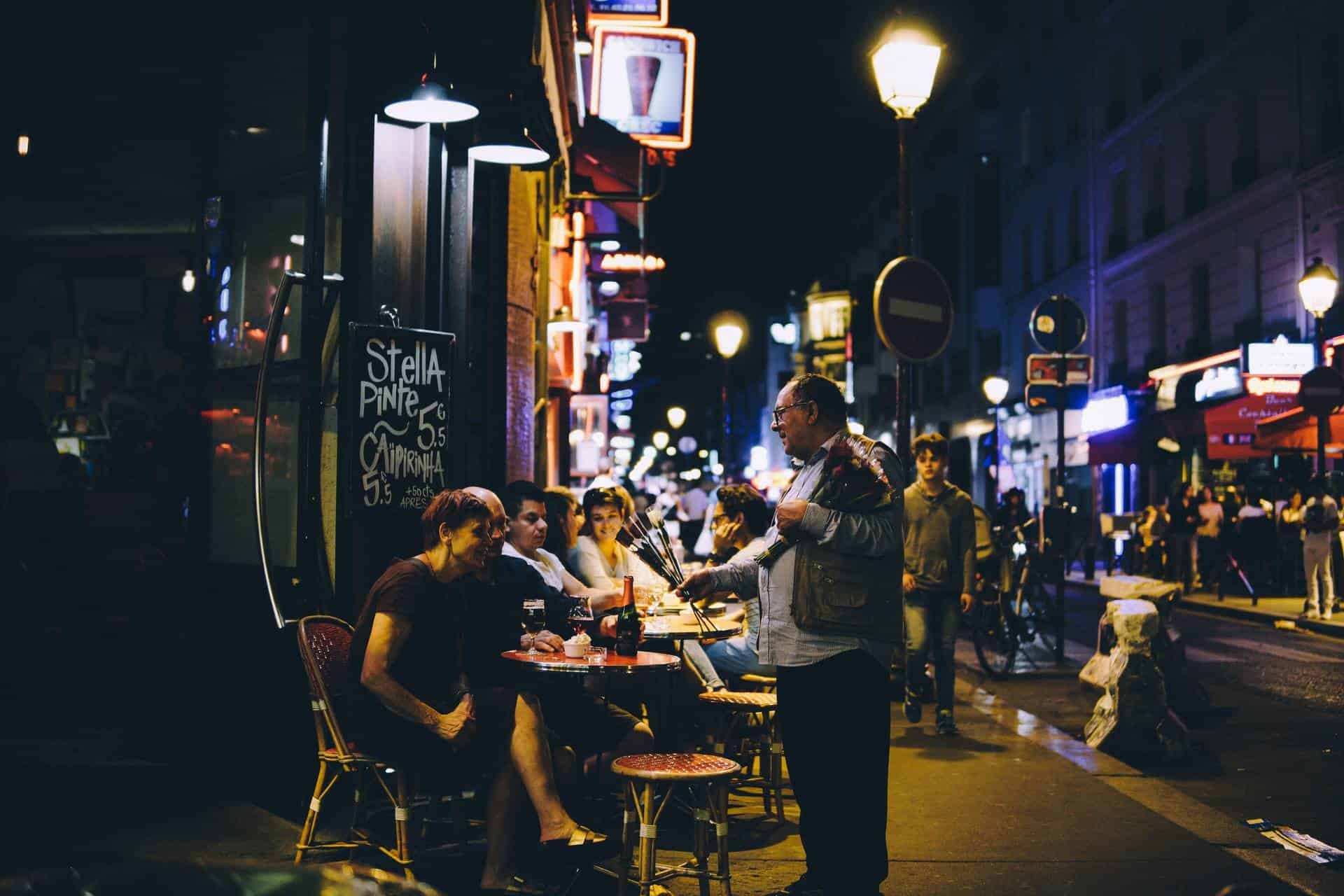 The nightlife in Paris really does have something for everyone. You’ll find a variety of bars in Paris, including a range of clubs, pubs, theatre and music venues.

From bars which serve drinks in babies bottles, to ultra luxe clubs that require some name dropping, or card (black Amex) showing, and clubs where you can dance like no one’s watching (although they will be).

To start your night out right, grab a drink or two in a ubiquitous dive bar, before burning up the dance floor and spreading some cash, at one of the trendy clubs. If you’re traveling alone, why not join a Paris Pub Crawl? Book your spot here, or search for availability below:

Bar scene and nightlife in Paris

Many cozy cafés and other drinking establishments abound around the Canal St Martin in the 10th.

The Marais boasts a large number of trendier new bars mostly in the 4th and to a lesser extent the 3rd with a few old charmers tossed into the mix. A number of bars and restaurants in the Marais have a decidedly gay crowd, but are usually perfectly friendly to straights as well. Some seem to be more specifically aimed at up-and-coming hetero singles.

There is a very active nightlife zone just to the northeast of Place de Bastille centered around rue de Lappe, rue de la Roquette, rue du Faubourg Saint-Antoine (especially the amazing Club Barrio Latino) and rue de Charonne in the 11th. Many of the bars closest to Bastille have either a North, Central, or South American theme, with a couple of Aussie places mixed in for good measure, and as you continue up rue de Charonne the cafés have more of a traditionally French but grungy feeling.

If you’re looking for the nouvelle vague (new wave) style, student and intellectual atmosphere of Paris in the 60s and 70s, you’ll find a lot of that (and more hip + chique) places in the quartier Latin and between place Odeon and the Seine. The neighborhood is also home of many small artsy cinemas showing non-mainstream films and classics (check ‘Pariscope’ or ‘l’officiel du spectacle’ at any newspaper stand for the weekly programme).

The area in the 5th on the south side of the hill topped by the Panthéon has a little bit of everything for the nighthawk, from the classy cafés of Place de la Contrescarpe to an Irish-American dive bar just down the way to a hip, nearly hidden jazz café at the bottom of the hill.

In some ways the Marais starts here in the 1st between Les Halles and Hôtel de Ville but with between all of the tourists and the venerable Jazz clubs on rue des Lombards the area deserves some special attention.

You’ll find any number of cozy cafés and other drinking establishments all around the Butte Montmartre in the 18th, especially check out rue des Abbesses near the Métro station of the same name.

If you are wondering where you can find the hipsters (bobos for bohemian-bourgeois), then look no further. There are several clusters of grungy-hip bars all along rue Oberkampf in the 11th, and stretching well into the 20th up the hill on rue de Ménilmontant. It’s almost like being in San Francisco’s Haight-Fillmore district.

There are a cluster of bar/restaurant/nightclubs along the southern end of the Père Lachaise cemetery in the 20th including probably the best place in Paris for nightly local and touring punk rock.

While this is super touristy, can you really say you’ve been to Paris if you didn’t visit the Moulin Rouge? Take your seat at one of the world’s most famous cabarets at a performance of the Moulin Rouge show “Féerie,” created by Doris Haug and Ruggero Angeletti, and choreographed by Bill Goodson. Book below:

Another good place to find the grungy-chic crowd is the northern end of the 17th around rue des Dames and rue des Batignolles, and if you decide you want something a little different Montmartre is just around the corner.

This previously deserted stretch of the river Seine in the 13th was re-born as a center for nightlife in Paris (and Sunday-afternoon-life) a few years ago when an electronic music cooperative opened the Batofar. Nowadays there are a number of boats moored along the same quai, including a boat with a Caribbean theme, and one with an Indian restaurant.

Make your trip to Paris easier with an all-inclusive pass

Visit as many Paris attractions as you wish over 2, 3, 4 or 5 days. Save money while ticking off the most popular Paris attractions including Eiffel Tower Guided Climb, Louvre Museum, French Wine Tasting at Les Caves du Louvre, Palace of Versailles, Musée d’Orsay and a Fashion Show at Galeries Lafayette, among many others.

Get your pass here.

This area boasts two of the most famous cafés in the world:

Café de Flore and Les Deux Magots, both catering to the tourists and the snobs who can afford their high prices. This part of the 6th is where the Parisian café scene really started, and there still are hundreds of places to pull up to a table, order a glass, and discuss Sartre deep into the evening.

Of course there are lots of interesting places which are sort of off on their own outside of these clusters, including a few like the Hemingway Bar at the Ritz which are not to be missed in a serious roundup of Parisian drinking.

Some nightclubs in Paris that are worth it

Remember when going out to dress to impress, you are in Paris! Torn clothing and sneakers are not accepted when heading out to enjoy the nightlife in Paris. The better you look the most likely you will get past the random decisions of club bouncers. Also important to remember if male (or in a group of guys) that it will be more difficult to enter clubs, try to always have an equal male/female ratio.

There’s also many things to do in Paris during the day, including exploring the delicious food in Paris.

Exploring the Best of St. Anton Winter Activities in Austria

Where to Stay in Sardinia, Italy