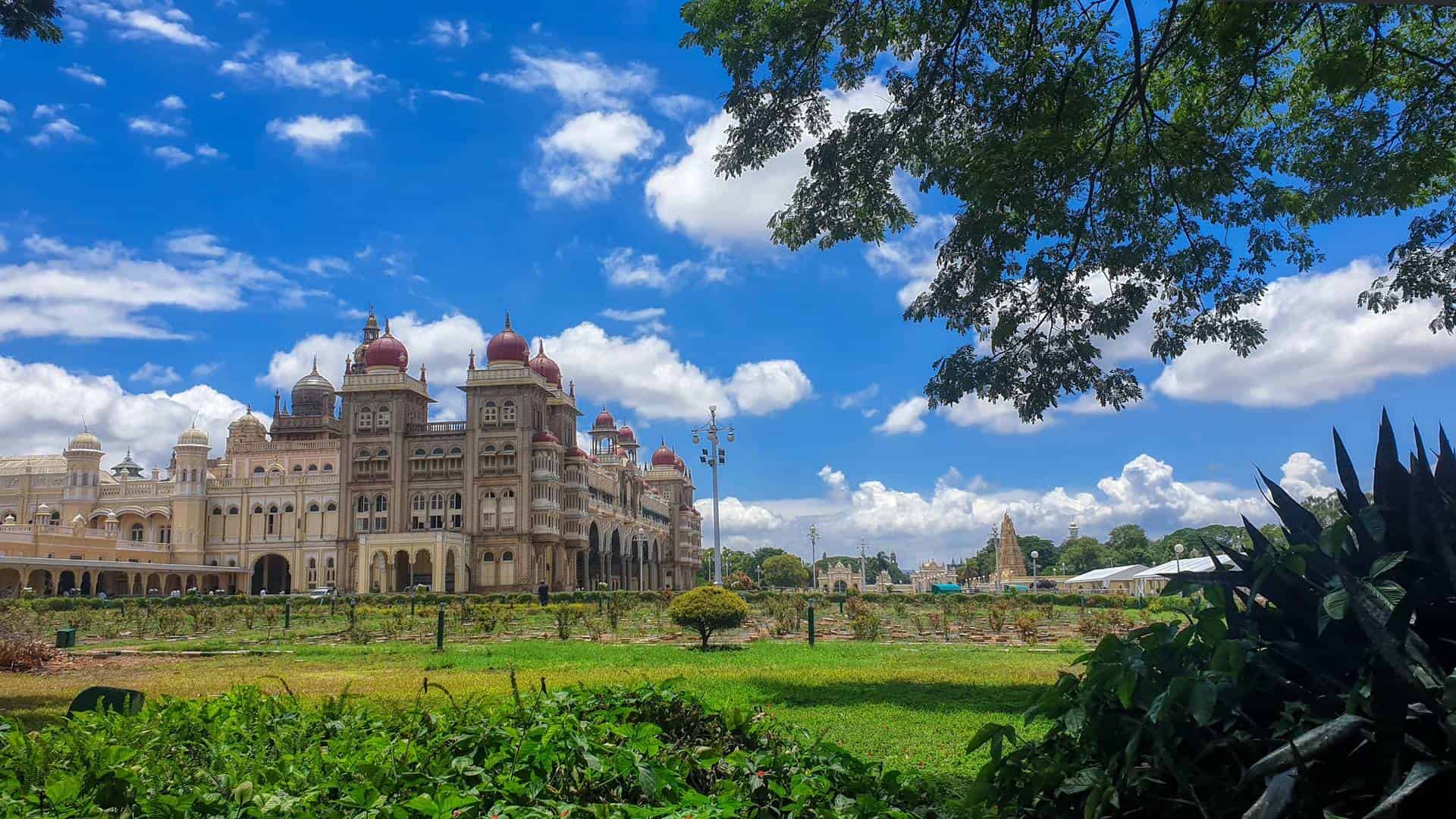 Mysore, is the most popular and the second largest city in Karnataka. Mysore is one of the top destinations of Karnataka Tourism and also one of the famous places of heritage in India. There are also many palaces in Mysore!

Often referred as the City of Palaces, the royal city still retains its old world charm with its palaces, heritage buildings, traditions and temples. Apart from Mysore Palace, there are many lesser known but beautiful royal buildings spread across the city.

Most day tours to Mysore from Bangalore (like this one) include a few of the palaces and temples in Mystore.

Here is a list of six other beautiful palaces in Mysore apart from Mysore Palace.

Other Palaces in Mysore to visit

Karanji Mansion is one of the famous palaces located in Nazarbad Mohalla of Mysore.  The palace was built in 1902 on an area of 38 acres on an elevated place. It was constructed for Krishnajammanni, a second princess of Mysore. The Mansion is built using the Indo-Sarcenic Renaissance style of architecture and comprises of stone cleave balconies, cusped arches, carved stone columns and sunshades. This mansion houses the Postal Training Institute of the Department of Posts from 1965.

Lalitha Mahal Palace is one of the elegant palaces located close to Chamundi Hill Road in Mysore. This is the second largest palace in Mysore after Mysore Palace. The corridors and the hall have lovely paintings of Mysore rulers and historical events of the Mysore Kingdom.

The restaurant block is the alluring part with the curved roof and the glass dome at the center follow spectacular architectural interest of the Mysore rulers. It is one of the magnificent palaces in South India and one of the top tourist places in Mysore. Now, the palace is converted into a five-star hotel and is maintained by the India Tourist Development Corporation.

Cheluvamba Mansion is one of the magnificent palaces located on the Mysore- Krishnaraja Sagar road, close to the Mysore Railway Station. The mansion was built in 1911 by Maharaja Krishnaraja Wodeyar IV for his third daughter Cheluvajammanni. This mansion is spread over a huge area and is surrounded by gardens like all other palaces in Mysore. The Mansion is beautifully built and all the rooms have splendid cravings.

But, today it is home to a premier research institute of the country, The Central Food Technological Research Institute (CFTRI). Entry to the palace is restricted for general public.

Jaganmohan Palace is one of the most beautiful royal palaces located in the Princely state of Mysore. It was built in 1861 CE by Krishnaraja Wodeyar III as an alternate retreat for the royal family. The main attraction of the palace is the hall with wooden doors. These wooden doors have marvelous carvings which depict Dashavatara, the ten incarnations of the Lord Vishnu. On the other hands, the breathtaking carvings on the walls of Jaganmohan Palace display royal history, lineage of the Mysore royal family along with murals on the Mysore Dussera.

Jayalakshmi Vilas Mansion is one of the stunning palaces situated on a high ridge in the campus of the University of Mysore. Built in 1905 by Maharaja Chamaraja Wodeyar, the palace was originally set in vast estate of 800 acres. The palace has an imposing structure and an equally impressive architecture with large & intricately carved pillars. The interior decorations of this magnificent building are in a purely Indian style.

The highlight of the palace is the kalyana mandapa which is a square shaped hall with 40 feet high glass dome. The Palace is now a part of the Mysore University and currently houses three museums – Archeology Museum, Folklore Museum and General Museum.

While you definitely need to visit Mysore Palace, we highly recommend also visiting the other palaces in Mysore.