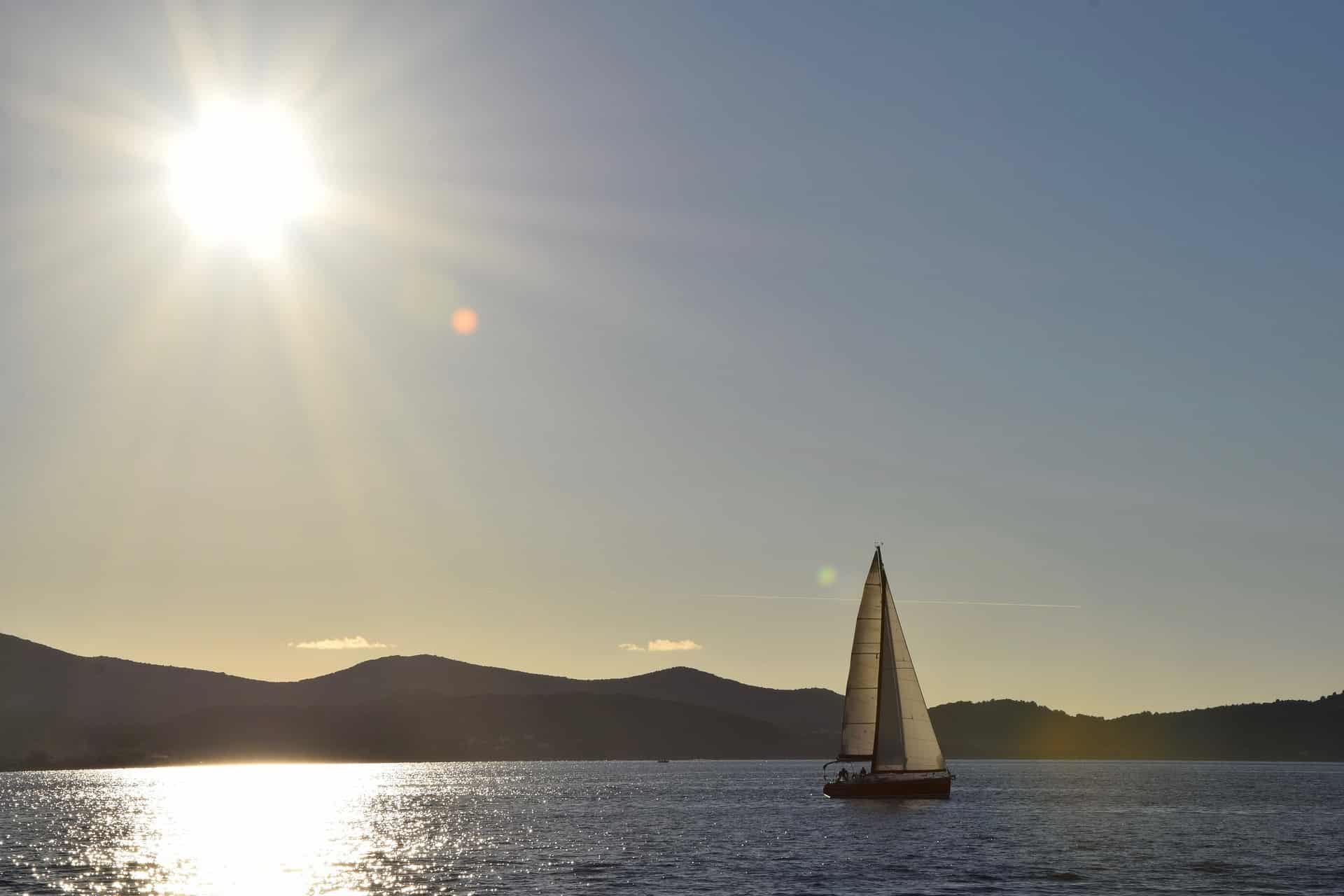 Up to now we had a very moving trip… why should that change now, when we sail along the Croatian islands?

We arrived in Zadar and liked the city from the first moment on. It wasn’t as touristy as Rovinj and wherever we came, people spoke to us in Croatian and after that in English and not German. That already was very nice.

Our plan was to get on a sailing boat with a skipper for a few days and to explore the Croatian coast. The prices for it were just too high and we were already looking for an alternative when we met a guy who was selling tourist boat trips at the harbour. These trips offered an all-inclusive deal for EUR 35 per person with all the food and drinks. We got the information that these trips would be just for the ones who try to get a cheap meal and drinks to get drunk. You can imagine how these trips look like… that was not what we were looking for.

But that guy also had his own private sailing boat and offered us a 2 day tour for EUR 300, which seems a lot for 2 days, but compared to similar sailing trips, it was a really good deal. That guy, let’s call him “D…”, seemed to be a nice guy who traveled himself the world.

Finally it looked that we went lucky on our trip… but it just looked like it.

The next day when we got to the harbour, we still had to wait a bit, as his boat still needed to be lifted into the water. We knew about that, as he told us that his boat needed some more color. It’s usual that these things need some time, so we just relaxed on top of his boat and enjoyed the weather and the looked onto the harbor.

After some hours we finally got into the water and headed on the open sea. Our El Capitano “D…” had already a few beers and some wine, but he seemed ok. But our drinks were finished soon and we went to the first island with a supermarket to buy some more. Sounded like a good idea, as I like a nice cool beer in the evening after a succesfull sailing trip. But all that beer and wine was very quickly emptied by El Capitano D…

It didn’t take long and our El Capitano D… was completely drunk!

The sun was gone and it was just about to rain and our El Capitano got a very very bad mude! At that moment we realized that he was in his midlife crizes…  Luckily there was another girl on board with us, who worked for an accommodation and food on bord for one week already. Mema was very nice and she was sooo ashamed of El Capitano that she tried to do her best to save the situation… and she actually did.

El Capitano nearly fell overboard a couple of times and all that he promised was changed by another plan a couple of minutes later. So we didn’t fish our dinner… (I had to try to fish with a bonbon and later with a potato, as our El Capitano wasn’t in the mood for it).

I was soooo close several times to demand to get back to the city or to tell him what the heck he was thinking. But who knows how a drunken El Capitano reacts to that and we were completely in his hands.

We tried to do the best of the situation and just went along and luckily we had Mema on board, who we got along with very well. She cooked us a nice dish with what we still had on board. El Capitano didn’t even want to prepare our cabin (we found out later), but Mema told him off and finally, we had our bed and a bit of sleep. But how would be the next day?

We got up and the El Capitano was luckily nearly back to normal. He didn’t excuse his manor, but asked if he behaved bad… Well, whatever… we wanted to enjoy at least one day of sailing in Croatia. So we just forgot what had happened the day before (after telling him how he behaved), which was a good idea as we…

…we saw two dolphins just about 100 metres away right at the spot where we had anchored overnight! Wow! That was a good start!

That was not all! The sun was shining and most of the times we had some good wind to sail along and our El Capitano behaved finally well! He still promised to visit a few places, where we never got, as the wind wasn’t good or the time was suddenly missing. So all we’ve seen was the water and the islands of a distance. It would have been nice to sail into a small bay with a harbour, but we were already so lucky that the sun was shining, that we had wind and a non-drunken El Capitano.

In the end we got along quite well and Mema was so nice to cook us some delicious Spaghetti in the evening just before we went our way again.

Mema, if you are reading this… thanks a lot for saving the situation! It was definitely not your fault and your duty to do so.

El Capitano, if you are reading this… thanks for an interesting story to write about and for the one or other interesting discussion and information.