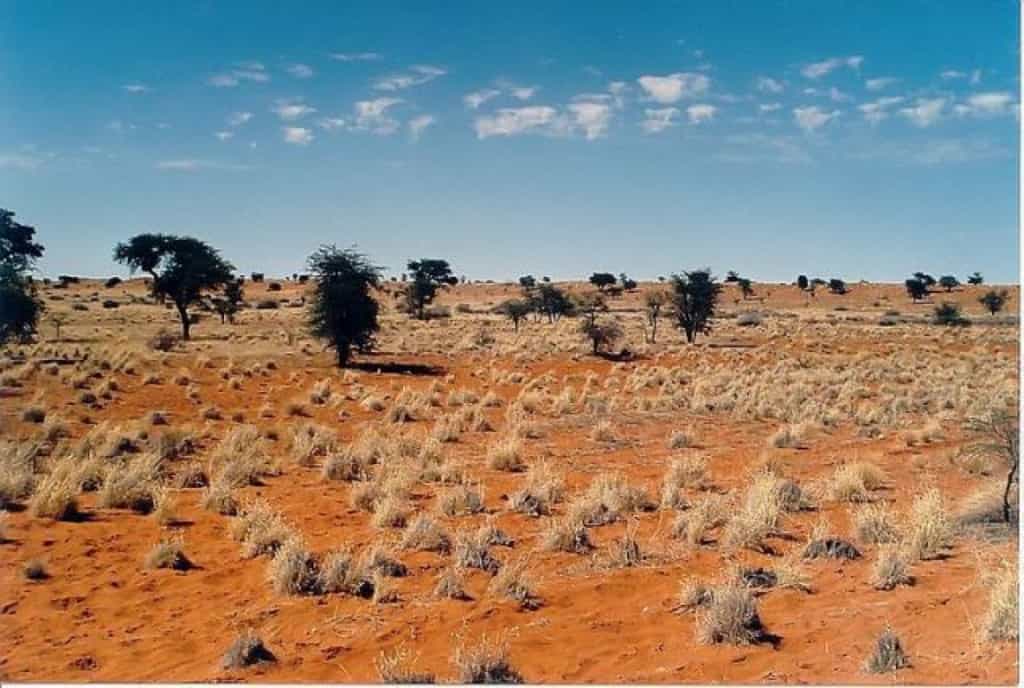 The Kalahari Desert is a large semi-arid sandy savannah in Southern Africa extending for 900,000 square kilometres (350,000 sq mi), covering much of Botswana, parts of Namibia and regions of South Africa.

If you’re looking to explore the desert in Botswana, you’ll need to know a bit about the different regions of the Kalahari in Botswana.

Regions of the Kalahari in Botswana

The Kalahari Desert lies in the Kalahari Basin, which is enormous, about five times the size of France, and the Basin covers all of Botswana and parts of her surrounding countries.

The Kalahari Basin was created 135 million years ago when South America, Asia and Australia tore themselves away from Africa. The power of this event and of the secondary volcanic and earth shuddering activity it caused lifted the edges of southern Africa like a bowl, creating the Basin. Over many millions of years this part of the world passed through extremely dry periods, during which fierce sand storms dumped layer upon layer of sand into the basin. And today, 65 million years later, this is the oldest and largest stretch of sand on our planet.

These sands are about 250m deep and geologically this area has looked almost the same for most of those 65 million years. Now in all honesty one million years is quite difficult for us to contemplate, let alone 65. But in terms of an almost unchanged landscape that is, even geologically speaking a long, long time. To put it into perspective only 12 000 years ago most of Europe was under ice and completely uninhabitable. And the rugged valleys of Scotland and Fjords of Norway were carved by that very same ice.

Because of this great age and because of Africa’s position in relation to the equator, Africa was largely unaffected but the last few ice ages and thus, when compared to the rest of the planet, Africa has suffered far less extinctions. The result of this an amazing diversity of plants, trees, birds and animals. To give you an idea of this diversity the Okavango Delta alone has as many species of trees as the whole of Western Europe.

The Kalahari is currently in the wet period of its 65 million year history. It’s most outstanding physical feature is the living desert. The sands of the Kalahari Desert have mostly been blown there rather than transported by water and thus are not very fertile. Even so, after good rains, grass is plentiful and this supports an astounding diversity of life. The Kalahari Desert is the last refuge of the San or Bushmen, who have roamed Southern Africa for the last 30 000 years and are now on the verge of extinction.

At some stage in this 65 million year period large Rivers flowed into the Kalahari Basin, creating a giant lake which in turn emptied into the Indian Ocean via the Limpopo River. And then about 50 000 years ago, due to the numerous fault lines in the area, all but the Okavango River were diverted, and the Lake began to shrink. Until about 10 000 years ago another fault effectively dammed the Okavango River creating the delta and leaving the Lake to become the largest the salt pan complex in the world, the Makgadikgadi Pans – an amazing expanse of whiteness the size Switzerland.

The Moroccan Hammam: Why Every Traveler Should Step Outside Their Comfort...

Top Things to Do in Botswana