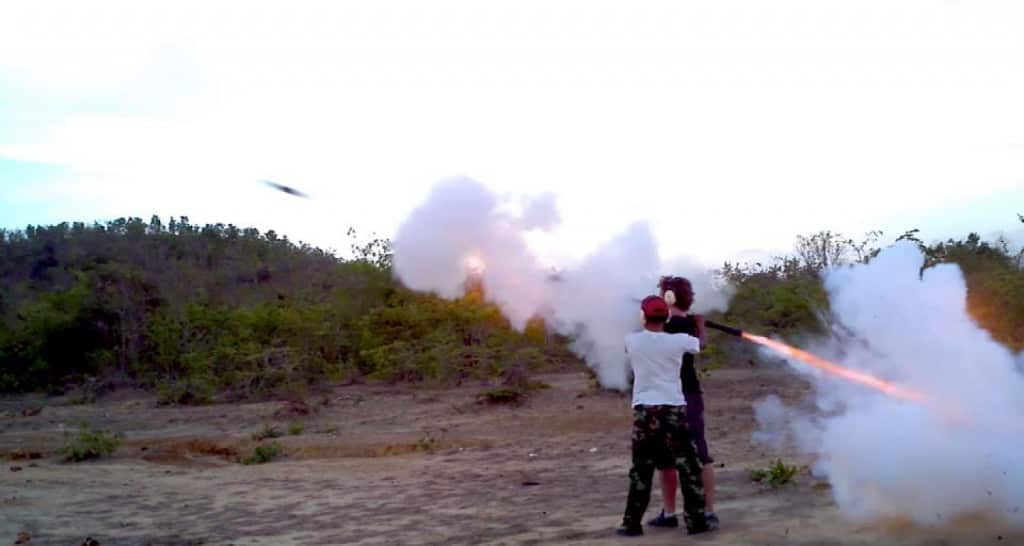 Ever thought about shooting a RPG in Cambodia?

Now this definitely isn’t on everyone’s to do list. But when the opportunity presented itself to me, I could not resist.

Maybe it was all those years of my childhood that my dreams of having an air rifle went unfulfilled or years of watching Hollywood action flicks that warped my mind, but for whatever reason, I decided I wanted to shoot a REALLY big gun.

To be clear I am not at all for war or violence, I just think it’s fun to see big explosions like fireworks, building demolitions and so on.

So what is a Bazooka or RPG?

A Bazooka a.k.a RPG or Rocket Propelled Grenade Launcher is pretty self-explanatory. It is a portable, shoulder-launched anti-tank grenade launcher. It is a simple 120cm long steel tube into which a special rocket-grenade is fitted. It can fire grenades as far as around 200 meters give or take. The original design made its way onto the scene in the late 1940s being produced in Soviet Russia. Later these devices would be produced in China and Northern Vietnam.

But I’m not in the military or part of a militant terrorist organization, where on Earth could I possibly fire one of these? The answer is Cambodia. Last year while travelling in Cambodia, the owner of my guesthouse, Virak, (Dragon Guest House), highly recommend it for the budget backpacker, the owner, Virak, is a really nice guy) offered to take me to the local military base where you could fire an assortment of guns for a fee.

I thought, I had no other plans that day so why not. I’m going to shoot an RPG in Cambodia!

He drove me out to this military base on the outskirts of Phnom Penh (the capital city) and I was basically shown a wall full of guns, from handguns to rifles to machine guns and so on. I was also handed a menu with all the prices and weapons I could choose from.

How much does it cost for shooting a RPG or Bazooka?

I was traveling on a tight budget, trying to keep my expenses to $250 a week max. But there are times when you have to throw caution to the wind and say to yourself, “F#$% the budget” and just do it. The prices for most of the guns were around $1-$2 per bullet. The cost of firing an RPG, Priceless. Just kidding, the cost of shooting the RPG is $300 for one shot. At first I thought, it was way to expensive and there was no way I could justify throwing down so much money for one shot.

But after looking over the menu and realizing I could probably shoot most of these other weapons on other firing ranges around the world, but the opportunity to shoot an RPG may very well never present itself to me again, I decided to do it.

Where did you shoot it?

The base we were at had a small firing range, sufficient for machine guns and pistols, but not adequate for blowing sh!t up. Upon making my decision, we (my guesthouse owner, his cousin and two military officers) hopped into one of the Cambodian military officer’s cars (an early 90’s Toyota Camry of course), and drove to another base 20km further out from the city, making a stop along the way so I could withdrawal money.

We arrived at the second base and made our way to the middle of a big open field with mountains in the backdrop, after passing through two armed checkpoints.

What was your target?

Upon pulling into the second base, one of the military officers turned around and said, “You want chicken, goat or cow?” I said, “what? what for?” naively although I already had an idea where this was going. He replied to shoot at. I respectfully declined as blowing up innocent animals just isn’t my cup of tea. Where we set up there was a mountain range about 200-300 meters or so out. That would serve as a perfectly harmless target.

One of the military officers opened his trunk and pulled out the RPG and a rocket-propelled-grenade. He assembled them by putting the grenade into the end of the steel tube (the RPG) and twisting (just like in the movies). He put on headphones and handed me a pair. After handing my camera off to my guesthouse owner, I and the military officer walked 5 meters away and he instructed me on how to stand and handed me the Bazooka. He showed me how to hold it and pointed the tip up at a 30-40 degree angle or so and looked me in the eyes and said, “shoot high, it’s better.”

The camera was rolling and I did a little 3-2-1 countdown and pulled the trigger. BAMMMM! a rocket shot away from us at such a fast rate I lost sight of it. The huge cloud of smoke we were standing in didn’t help. After about 5 seconds I still hadn’t heard an impact explosion and thought maybe it had gone over the mountain or it was a dud. After a good 7-10 seconds I heard an explosion way off in the distance (before the mountain) and saw a small mushroom cloud poof up from the ground.

Was it worth it?

I can’t say if the experience would have been worth it for you, but for me, it was amazing and worth every penny. I was flying on adrenaline for a good hour or so afterwards, similar to the feeling of coming up from your first scuba dive, or after your first skydive. All I could say was “that was f’ing awesome” as ignorant as that may sound. It was an experience that no one I personally know has had, it was an experience I know I will probably never have again, and it was plain and simple fun, like shooting the biggest most powerful firework known to man.

This experience isn’t for everyone, and maybe shooting a handgun or machine gun will be more than enough to satisfy your childish dreams and Hollywood desires. But if you can find the nerve to splurge $300 on a once in a lifetime experience this isn’t a bad choice. After a long hot day of shooting a Bazooka, my guesthouse owner took me for some delicious Cambodian BBQ.

We highly recommend getting good travel insurance as most likely your standard health insurance won’t work abroad. We at Travel Dudes recommend the awarded Travel Insurance by WorldNomads which you can easily purchase online for the exact time needed.