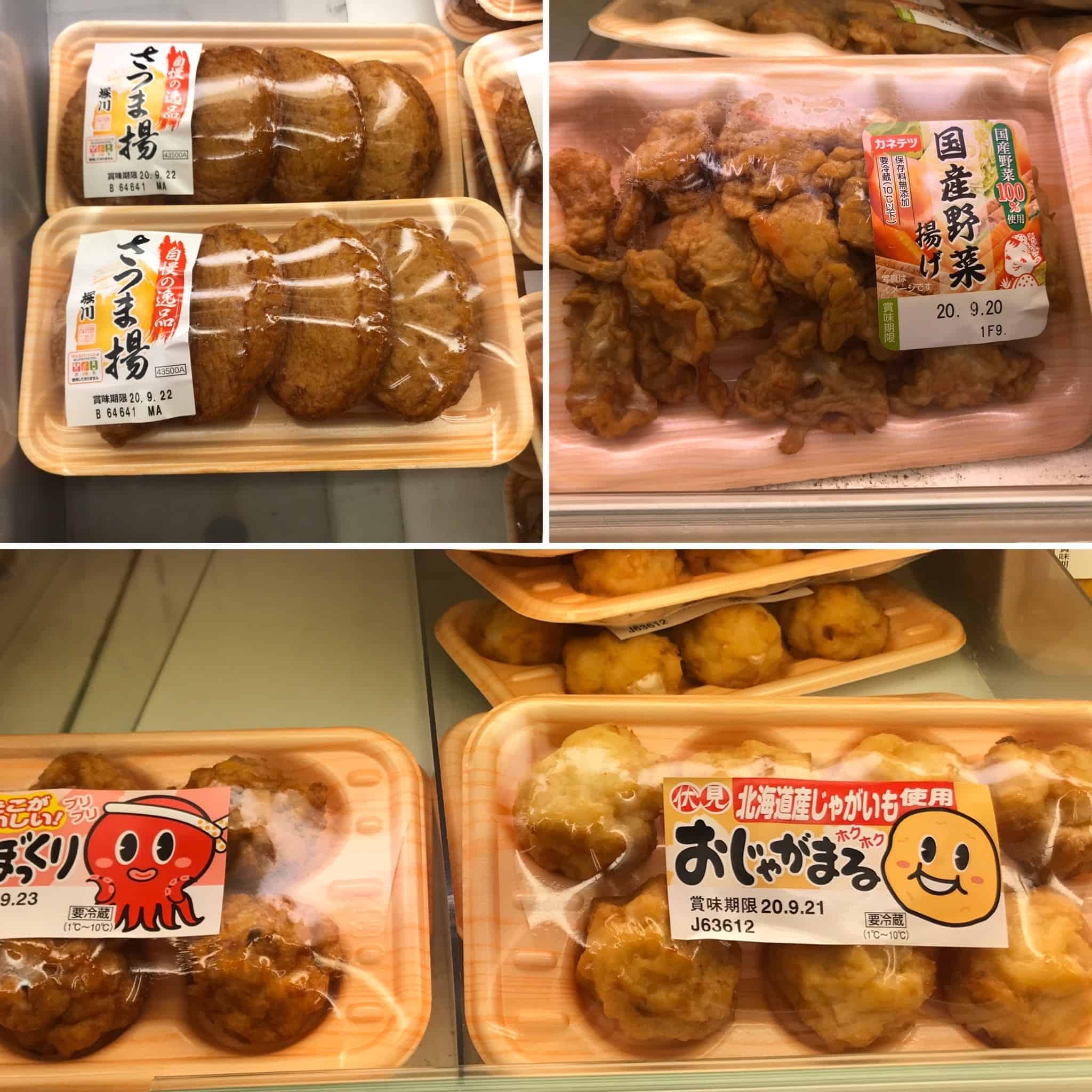 Supermarkets in foreign countries are often just as fascinating as their famous tourist attractions. They are treasure troves of intriguing and delectable delights, but they can also be pretty confusing.

The supermarkets of Japan are no different.

They are home to some items which bear resemblance to Western products, though don’t quite make sense (pre-made, cold ‘Milk Tea’ in litre bottles, anyone?) But they also house other products which are, quite frankly indiscernible, whether you’re a tourist or an expat.

Here are 8 ubiquitous Japanese supermarket items that often puzzle foreigners, and explanations, so that on your next visit you can confidently give one or more of them a try!

Common items in supermarkets in Japan

Upon first glance these polystyrene trays of jewel-like red oblongs, found in the fish section of supermarkets in Japan, could be mistaken for sea creatures themselves, but they are in fact the egg sacks of Alaska Pollock. Inside, the roe itself is referred to as mentaiko and is often served on top of rice; as a filling for rice balls; or inside rolled omelette (known as makitamago, or mentaidashi makitamago with the addition of the roe).

It’s also commonly stirred into spaghetti as part of a sauce, and can be mixed with mayonnaise to make a dip or spread. In this way, it is not dissimilar to taramasalata – the popular European mezze dip made from cured cod’s roe.

For those not crazy about fish flavours, it’s important to note that mentaiko’s taste isn’t overly ‘fishy’, instead it simply adds a salty, rich flavour to the meal or snack.

Much like mentaiko, boxes of shirasu can be a little arresting for first-timers in a Japanese supermarket. However, shirasu is simply
whitebait – the fish that, in the West, usually appears on menus deep fried after being coated in flour, or cooked into fritters.

Whitebait is the collective term for juvenile white fish comprising different species (in Japan, anchovies, sardines and herring), and in Japanese supermarkets shirasu is sold in its raw, pure form (and sometimes dried, in a sweet glaze, with nuts).

These tiny, delicate fish can be eaten straight from the packet, or sprinkled on top of rice. They are also delicious when accompanied by soy sauce and ginger, or mixed with tomatoes and garlic for a pasta sauce. As with mentaiko, shirasu doesn’t have a strong fish-like odour or flavour, making it more palatable than other fish.

These long, white vegetables, almost carrot-like in appearance, are radishes native to Asia. Daikon are juicy and sweet root vegetables with a taste similar to that of a turnip, instead of the peppery flavour of their small, round and red Western counterparts.

They’re also huge – one daikon is about the width and length of a forearm. Daikon can be eaten raw or cooked. When prepared
raw, it is usually grated and served on, or with sushi as a garnish, or as an accompaniment to tempura. Its purpose as a tempura companion is as a kind of palette cleanser, lightening the heaviness of the fried batter. When cooked, daikon is usually boiled or steamed and added to soups or stews.

If dragging home and chopping up this vegetable is cumbersome, you can also buy dried and thinly sliced daikon which can also be added to a stew or salad after rehydrating it in water.

It’s no secret that one of Japan’s most popular vegetables is not found on land. Seaweed is a big part of the Japanese diet owing to its nutritional properties and is therefore abundant in Japanese supermarkets, where it takes many different forms (unlike in the West where it appears mainly as sheets of nori).

It is sold fresh and also dried. The below images are all examples of fresh seaweed from different types of plants, grown in different areas around the coast of Japan.

All of these can be eaten raw, straight from the packet (great with a splash of soy sauce) or mixed into a salad or a soup. They are found in the refrigerated section of the supermarket.

The bottom image is dried and shaved kelp (a subcategory of seaweed), found in the dried goods section. Japan’s kelp is different to the giant kelp plants found in European waters, and is called kombu. This kind of shaved kombu is often used as a coating for onigiri (rice balls), but it also appears as long, thick, leather-like sheets, which are added to soups as a flavour enhancer – their umami taste is the common base flavour of most Japanese broths.

Whilst these might look like different products, they are all in fact slightly different kinds of kamaboko (Japanese fish cake) that share the same main ingredient: surimi. Surimi is a paste made from ground fish (and sometimes meat). Although originating in East Asia, surimi is nowadays well-known in the Western market too, often showing up in the form of seafood/crab sticks which are referred to as ‘imitation seafood’. But to dispel any confusion – surimi is seafood, it’s simply processed and formed into a variety of shapes, sometimes imitating other whole seafood like crab or lobster.

A famous example of kamaboko is naruto kamaboko, the white and pink, thinly sliced fish cake often served as a garnish on top of soup or chirashi sushi (‘scattered’ fish on top of rice). Surimi bought in any form does not require cooking, as it is already pre-cooked, however fish cakes fried or grilled can make for a delectable treat, and sliced they are a delicious accompaniment to stews.

As mochi has become more and more popular globally, many may have spotted these delicate- looking treats outside of Japan, but may not have known what mochi really was. To explain – mochi is a Japanese rice cake made from mochigome (a glutinous rice grown mainly in East Asia), which is ground, steamed and pounded into a soft and chewy dough. The left image shows daifuku –specifically, ‘filled mochi’. Daifuku is most commonly filled with anko (a sweet paste made from mashed and sweetened azuki beans), but other fillings include white bean paste, ice-cream and strawberries.

The right image is dango. Colourful hanami dango is on the left, and is so called because it is traditionally eaten during cherry blossom season (hanami), and mitarashi dango, on the right, is characterised by its slightly sweet soy sauce glaze and burnt fragrance. Dango itself is similar to, and often mistaken for mochi, but is made in a different way and is therefore a different product.

The treats pictured here are sweet, but mochi and dango can also be eaten as savoury food items, for example grilled on the BBQ with a bit of salt. Both are important parts of Japanese culture, historically having been revered by aristocracy and used as offerings in religious ceremonies.

Somewhere between a cake, a pancake and a sandwich sits this famous Japanese confection. Although the outside batter of dorayaki resembles the classic American pancake, it differs slightly in that this Japanese version uses honey and mirin, and its texture is more like that of a cake.

Traditionally the filling is anko (red bean paste), as depicted here, but nowadays there are several dorayaki variations, with fillings ranging from nutella, to custard, to cream cheese. The sweet’s existence spans hundreds of years with its origins believed to be routed in samurai culture.

In modern Japan, dorayaki is famous in pop-culture as the favoured snack of celebrated manga character and household name, Doraemon (an earless, blue robot cat who is so addicted to delicious dorayaki that it is sometimes his downfall!)

It’s difficult to discern what konnyaku actually is when seeing it for the first time. A jelly? A kind of tofu? Rubber? In fact, it is a substance made from the root of the konjac vegetable – a striking-looking plant grown in East and South East Asia.

Konnyaku is often presented in supermarkets in Japan as either pre-prepared noodles (bottom left and right images) or as a grey or white slab (top left and right). In this way, it might not look particularly appetizing, and indeed by itself it is flavourless. But when cut up and mixed into stews or accompanied by a sauce and other ingredients, it serves as a wonderfully healthy carb alternative (at 98% water it is naturally low in calories). The difference in colour relates to the addition of seaweed (grey meaning with, white meaning without).

Before eating, konnyaku should be boiled to help it absorb more of the flavours.

Consumption of konnyaku dates back to the 6th century where the plant was primarily used as a medicinal remedy for intestinal problems. It’s nowadays known in Japan as a ‘broom of the stomach’, in other words – it has diuretic qualities, so you’ve got to be careful not to consume too much in one sitting!

Just like the cafes in Japan, the supermarkets in Japan offer a whole other world to explore. Don’t be afraid to try out new things, no matter how unusual they may look to what’s found in your supermarket at home!

Interested in food in Japan? Check out these posts: