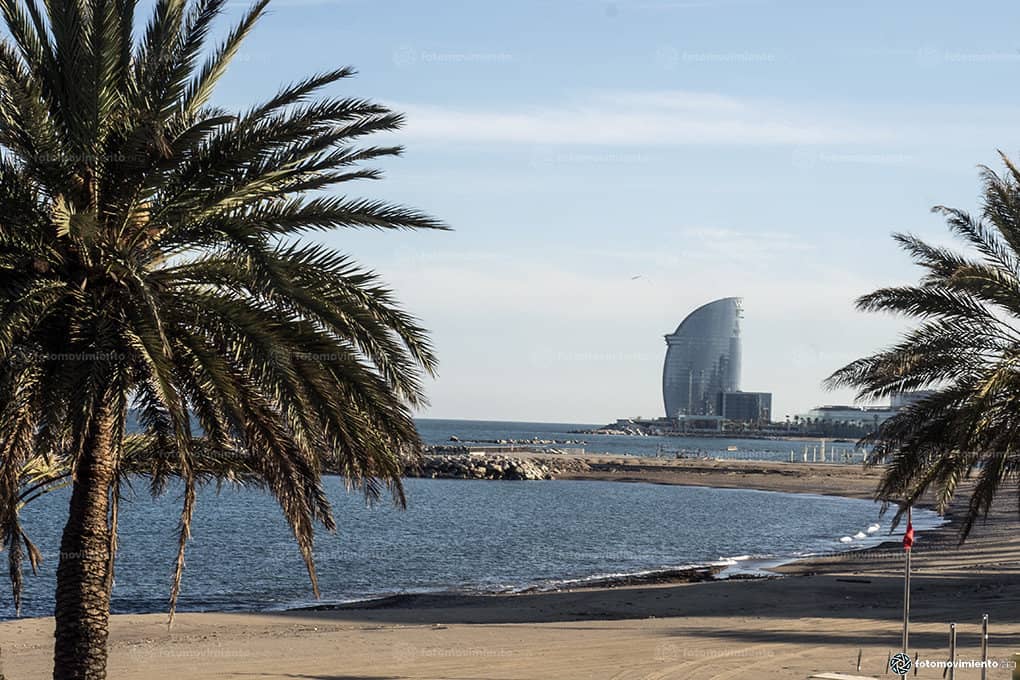 One of the best parts about Barcelona is its beautiful array of beaches. The city has more than 300 days of sun per year and. 4.5 km of sandy coastline.

Whether you’re looking for a place to relax, or to get the adrenaline rush of water sports such as windsurfing, there is the perfect place for everyone. We’ve gathered a list of some of the best beaches in Barcelona.

Let’s check them out!

Make your trip to Barcelona easy with an all-inclusive pass

Get your pass here.

The best beaches in Barcelona

Here, we share with you the best beaches in Barcelona, the Catalan capital.

Another great way to enjoy the Barcelona beaches is by viewing them from a boat. Join this two-hour catamaran cruise to admire the skyline of Barcelona. Enjoy a drink and snacks on board and go for a swim or watch the sunset.

Book your Barcelona catamaran cruise below:

Ildefons Cerdà, the iconic designer of the Eixample neighbourhood of Barcelona, had a utopian dream of a city. He had planned on calling it Icària and attracted other utopian followers to move to the old road leading to the Poblenou cemetery.

The Olympics revived the Nova Icària, and it is now one of the city’s most popular beaches. It has the most services and leisure options out of any of the other beaches. Along with Bogatell beach, it’s also one of the calmest.

The Bogatell Beach in Barcelona owes its name to an old stream that once ran from the Vilapicina neighbourhood of Nou Barris down towards the sea. The area used to be home to fishermen, as the beach wasn’t always as beautiful as it is today.

Alongside most of the Barcelona coastline, the beach at Bogatell was revamped during the 1980s and is now one of the city’s most popular.

Mar Bella is the official gay nude beach of Barcelona and is particularly crowded during the summer months.

This part of the coast already had baths at the beginning of the 20th century, the Baños de la Mar Bella, but were eventually destroyed in a storm. The city renewal process that came about due to the 1992 Olympic Games rejuvenated the Mar Bella beach.

This beach is very diverse: at one end you’ll find a Barcelona nudist beach, and the other end a children’s playground. One of the friendliest beaches in Barcelona.

Located just next to the port and at the foot of the iconic Hotel W, is the fantastic Sant Sebastià beach. It has over a kilometre of sand and sea and is a comfortable walking distance from the city centre. From here you have a breathtaking view of the entire coastline of Barceloneta all the way down to the Olympic Port area (check out these other great viewpoints in Barcelona).

Barceloneta is the city’s most famous of the beaches in Barcelona! It is named after the neighbouring Barceloneta, where fishermen used to take their home in the 18th century. The construction of the seafront promenade connected this old neighbourhood with the Olympic Port.

Expect to find many different beachfront chiringuitos (beach bars) serving typical Barcelona tapas and cool drinks. Due to being the closest beach to the city, Barceloneta is the liveliest of them all.

You’ll find many of the best beach bars in Barcelona along this beach!

While not a beach in the traditional sense, you can go and bathe in this seafront area. A cement structure is built into the sea, to create an enclosed saltwater pool. It is large and shallow, giving you the feeling of being in the sea, without all the hassle of the beach!

It is free to enter, and there are lifeguards and public facilities to use. There’s also a wave machine that you can use to practice your surfing technique, in a safe and fun way!

Next to the many beach clubs in Barcelona, Somorrostro beach is also popular with tourists. It’s less busy than Barceloneta but is usually frequented at all hours of the day by those entering and leaving the clubs.

This beach has been specially adapted for wheelchair users so it’s great for those who require extra accessibility.

While all beaches in Barcelona are gay-friendly, the official gay beaches of Barcelona are San Sebastian and Mar Bella. When at Mar Bella make sure to visit the Chiringuito BeGay bar.

While not in Barcelona, Playa de la Bassa Rodona in Sitges is another great gay beach nearby. The beach is in the centre of Sitges and has an eclectic vibe. Playa del Muerto is the official gay nude beach in Sitges and is much quieter and more relaxed.

Buy the Hola BCN card for unlimited access to the transportation networks in the city and its suburbs. Experience the beauty of Barcelona and uncover its many treasures with a 48, 72, 96, or 120-hour pass.

Check out some of our other Barcelona tips and guides:

Where To Stay In Rome: Our Rome Accommodation Guide

Barcelona in January: Why it’s the Best Month to Visit