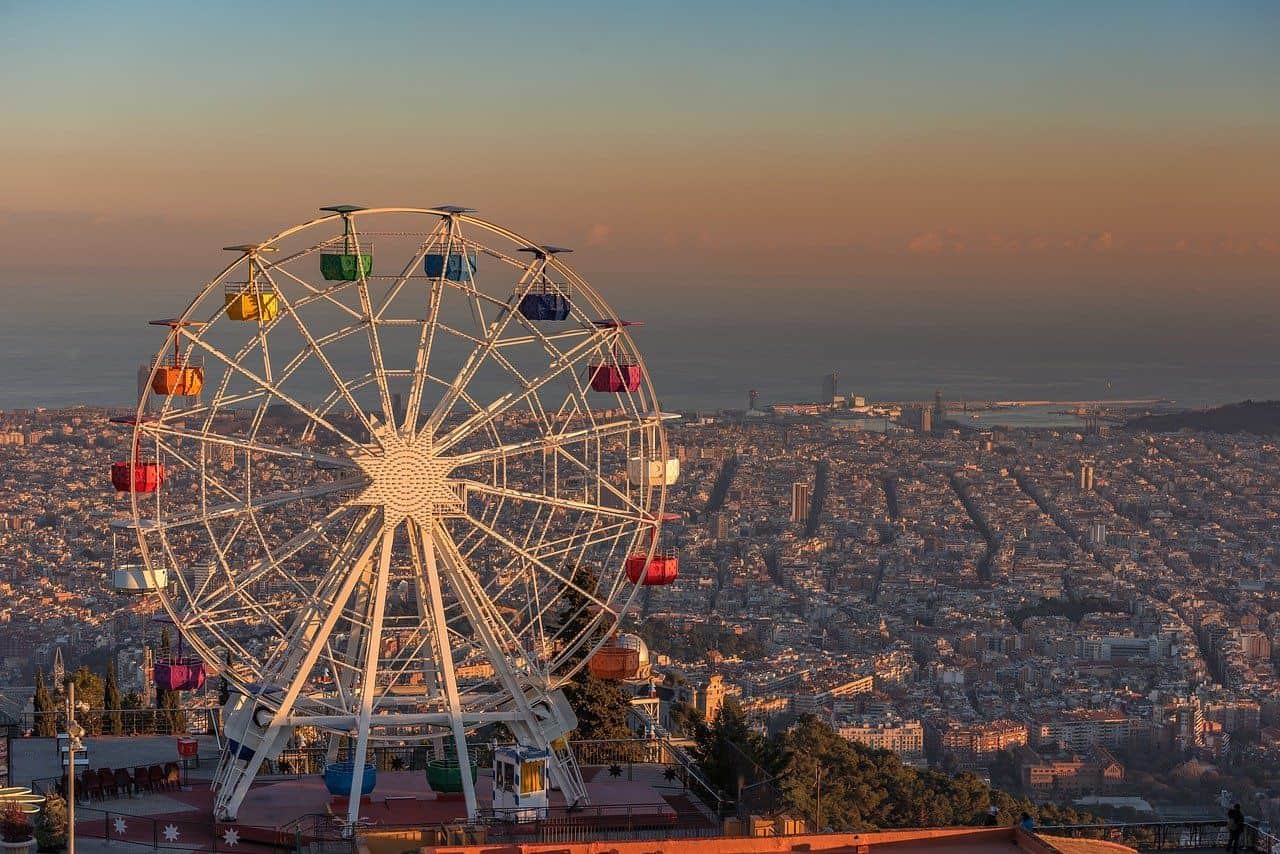 Barcelona has earned its reputation as the European rival to New York’s title of ‘the city that never sleeps’, with a buzz of activity and life taking place from sunrise to sunset.

What better way to experience the city in all its wonder than to seek out the best views in Barcelona?

There’s never a shortage of things to do in Barcelona, whether its heading to the beach, learning some history in the many museums in Barcelona, or heading out to some of the world’s most iconic monuments. There’s so much to explore in the Catalan capital, but what better way of taking all of its entirety in than by exploring the city’s best vantage points, for some of the breathtaking views we’re sure you’ll have ever seen.

Some of the most spectacular, panoramic views can be found in some of the most unexpected places in Barcelona. In parks, museums, and monuments, there’s so many great spots to take in the beauty and vibrancy of Barcelona.

The Bunkers del Carmel are located in the Turó de la Rovira, in the Carmel neighbourhood. They offer stunning 360° panoramic vistas of the city, at a height of 262 metres above sea level. A local’s favourite, people love to come up here for sunset with some drinks, and to admire the view as the day draws to a close. It is free to enter, so buying tickets isn’t necessary, which is another great bonus to this place!

During the Spanish civil war, Bunkers del Carmel housed antiaircraft weaponry, and its elevated position proved vital in spotting incoming enemy aircraft. Despite its name, there has never actually been a bunker at the top of Turó de la Rovira, but its surroundings were previously home to residents in ‘shantytown’ style housing. In the lead up to the Barcelona Olympic games in 1992, the shanties were destroyed, and the inhabitants were offered new flats instead. This left the Bunkers largely inhabited, and the beautiful views were a best kept secret of the local neighbourhood residents.

The quickest way up to Bunkers del Carmel is by number 22 bus from Plaça Catalunya and disembark at Gran Vista – Pl Mitja Lluna. The bunkers are then an 8-minute walk up, but be warned it’s slightly steep!

Tibidabo is high up on the skyline overlooking Barcelona, with the recognisable building of the Templo Expiatorio del Sagrado Corazón that lights up at night marking its location. It is the highest peak of the Sierra de Collserola, which means it offers some of the most beautiful views of all of Barcelona. Tibidabo is also home to the oldest amusement park in Spain and Europe’s third oldest, built in 1899, which is suitable for children and the big kids among us too!

Tibidabo is free to access if you’re just after the magnificent views of Barcelona, but if you want to go on the rides themselves then you will need a ticket. Getting up there is of course longer than some other locations on the list, but so worth the journey up for the sights you can see.

The cheapest and fastest way of getting to Tibidabo is by taking the Tibibus from Plaça Catalunya, which drops you right outside the Tibidabo amusement park and is just €2.95 for a single ride.

The summit of Montjuïc hill is home to the Montjuïc castle, sitting at over 173 metres above sea level. The first fortress was built in 1640, and today visitors can go to explore the history of the castle, as well as to admire the beautiful 360° views of the city. The castle was used to defend Barcelona, and to attack it at various points in its history too. Exploring the interior of this castle and its history is an activity that is not to be missed when heading for the scenery as well.

From the roof of the castle, you have far reaching views out to sea, the port, and also out over the city itself and up to the mountains.

There are a few different ways to get to Montjuïc Castle: for the scenic route you can take the Teleférico cable car from Port Vell. By metro, you head to Parallel Metro station and then hop on the Funicular. Or, the cheapest route is by taking the 150 bus from Plaça Espanya.

One of the most instantly recognisable parts of Barcelona, Gaudí’s masterpiece of the Park Güell. The park is a beautiful construction that visitors can walk round to marvel at the design and architecture, but also thanks to location in the higher levels of the city, hosts some spectacular views too.

You can enter for the great city views for free, or if you want to walk into the monumental zone, which includes the Plaça de la Natura, the Escalinata del Dragón and Sala Hipòstila, then it requires a small admission fee.

The easiest way to get up to Park Güell is by taking the 24 bus from Plaça Catalunya which will drop you off right outside the park. If you want to hop on the metro, you need to get the green L3 line and get off at Lesseps or Vallcarca and walk the rest up.

If you’re after yet another Gaudí masterpiece, La Pedrera is another architectural creation that offers the most beautiful sights inside and out. Casa Milà (also more commonly known as La Pedrera) is found on the Passeig de Gràcia, one of the most important avenues in the whole of Barcelona.

Declared a UNESCO world heritage site, it’s a fantastic place to spend an afternoon exploring the history of this magnificent building.

While you walk up the sculptured stairs and towers of the building, you can look out to admire the views of the city too. You will have to purchase a ticket.

Thanks to its central location on the Passeig de Gràcia, it is easily accessible on foot if you are staying in the centre of Barcelona. If not, the Diagonal Metro station is just 2 minutes’ walk away, serving both the Green Line 2 and Blue Line 5.

Built in 1987 in preparation for the 1992 Olympic Games in Barcelona, the Telecommunications Tower can be seen from all over the city.

Head up to the Collserola mountains to see the city from the angle of this architectural monument, with views stretching right along the Costa Brava coastline. The city doesn’t seem so big when you’re looking at it from 288 metres above sea level!

Sitting close to Tibidabo, its views are very similar, but here you can experience a full 360° panoramic view to the valley further north of Barcelona too. The tower has an observation deck on the tenth floor, and on a clear day you can see up to 70 km away. Even if you choose not to ascend the tower, the park surrounding it still has some breathtaking scenery too.

Hop on the S1 or S2 train at Plaça Catalunya and get off at Peu del Funicular, from here it is either a 20-minute walk. Or, you can get a bit closer up by hopping on the Vallvidera Inferior (FV) train until Vallvidrera Superior.

A spot that we’re sure you won’t have heard before (as it’s a bit of a best kept secret) is the Mirador d’Horta.

Previously where old gas tanks of the city were located, in 1991 it was converted into an open space with benches and railings, and most importantly, with a huge swing that you can enjoy while admiring the view at the same time!

It is located on the road from Horta to Cerdanyola del Vallès, 10.5km away from Barcelona. For these beautiful panoramic vistas of the city and Mediterranean Sea, we’re certain that the journey is worth it!

Get on the Line 3 metro at Catalunya until Valldaura, and from here it is a short 20-minute walk up.

Another beautiful building in Barcelona (there’s countless as we’re sure you’ve gathered from our list!), and home to the National Museum of Catalan Art, is the Palau Nacional.

Stunning to look at itself, but with even better when you head to the rooftop terrace for the views of Barcelona. The steps in front of the building have a magnificent view too, but it’s well worth the €2 ticket to head up to the rooftop. From here you can see the magic fountain, Sagrada Familia, and all the other fantastic parts of the city.

Get the red L1 metro line from Plaça Catalunya and stop off at Plaça Espanya,or take the 55 bus which stops off right in front of the building.

Any visitor to Barcelona will have surely noticed the iconic Port cable car that cuts across the city’s skyline from Barceloneta beach to Montjuïc hill.

Not for the faint hearted or those with a fear of heights, but breathtaking for those who can stomach it, the cable car travels at 101 metres above sea level at its highest point.

The ride isn’t very long, at roughly ten minutes, and costs €8.90 for a single journey and €13.50 for a return journey. If you don’t want to travel both ways, it’s also easy to hop back down on the other cable car of the city, the Funicular de Montjuïc, and to get the metro.

Traveling to Barcelona? Check out these posts:

Where to Stay in Barcelona: Our Barcelona Accommodation Guide

Things to Do in Barcelona: Our Barcelona Activity Guide

Why You Should Visit the German Ore Mountains

What to See in Cagliari, Sardinia

Guide to Experiencing the Best of Christmas Around the World