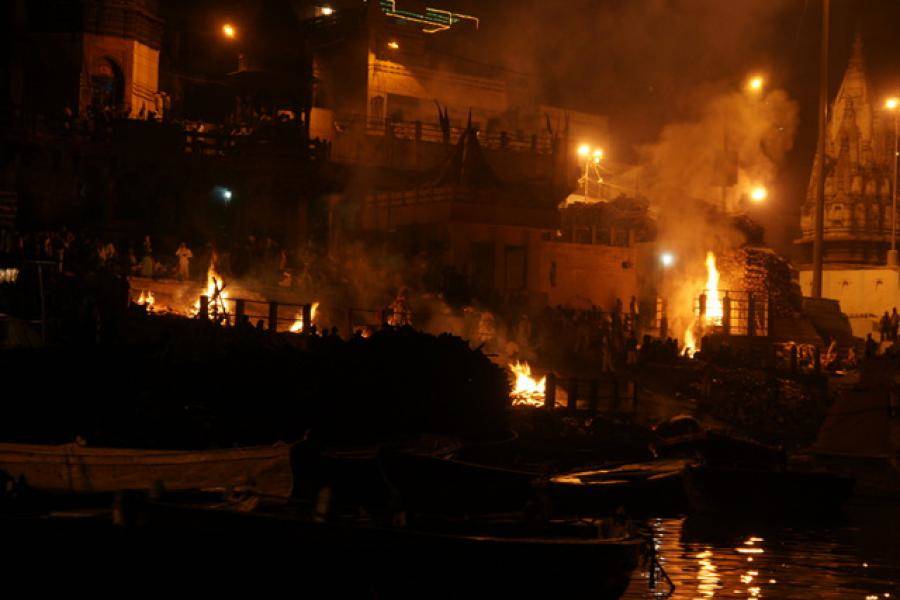 The chanting started softly in the distance, a murmur that grew louder and louder.

As the group neared us, the rhythmic chants reverberated off the walls of the dark, narrow laneways.

We quickly scampered up onto the steps of a tiny shop, anticipating the onrush in the confined passageway that was barely wide enough for the motorbikes or Brahma cows that had squeezed by us earlier.

Suddenly the group of chanters burst around a corner and Carol raised her camera to take a picture. I pulled her arm down as the last bearer turned his head and scowled at us.

Experiencing the burning ghats in Varanasi

Photos are definitely frowned upon in Varanasi.

Just as quickly as they had appeared, the litter bearers disappeared around another corner heading toward the holy waters of the Ganges. On the litter was a body wrapped in bright gold cloth, which made it all the more startling in the dark laneway.

“Don’t worry,” our guide Prashant consoled her, “there will be another one in a minute. Every minute there will be one more. Everybody wants to be cremated on the Ganges.”

Sure enough, a second and then a third group of male mourners shuffled by carrying a body covered in garlands of flowers on a bamboo litter and chanting to their God to accept the deceased on its journey to Nirvana.

We were following Prashant through a dark maze of ancient laneways lined with tiny shops selling iced milk, lassi drinks, and paneer dipped in sizzling pans of hot oil. It was so close that I could feel the heat of the charcoal burners as we passed.

The lanes wound down to the fabled burning ghats, a series of long, wide steps leading to the holy river Ganges. Without our guide we would have been totally lost in the narrow confines of old Varanasi. But then I realized we could have just as easily followed the steady stream of chanting mourners.

Getting back, however, would be a different story. A guide is a must.

Varanasi is the home of Shiva, the destroyer God of Hindus

And it is every Hindu’s wish to be cleansed with the holy waters, cremated at the burning ghats with the sacred eternal fire, and then have their ashes tossed into the sacred waters of the Ganges. This allows the soul to proceed directly to heaven, without having to deal with karma and reincarnations.

We arrived at the top of the biggest burning ghat, Manikarnika, and saw a huge pile of firewood stacked 12-feet high that blocked our view of the water. Prashant told us that they imported the wood from southern India at great expense. Sandalwood, teak and other precious woods are used by the wealthy; ordinary woods by those who cannot afford the heavily scented imports. People plan their cremations well in advance in order to get the right wood or to save the money for transporting their mortal remains to the Ganges.

We turned a corner around an ancient temple that housed the eternal flames and saw several columns of grey smoke spiraling up from the steps of the ghat.

Oddly, and much to our relief, there was only the normal smell of burning wood.

We peered over the edge of the top landing, and saw 10 separate piles of burning funeral pyres on different landings, high above the water.

As we stood watching, a steady column of bearers carried bodies wrapped in gold cloth down to the river. One after the other, they immersed the body in the Ganges, sometimes wading into the river themselves. At other times they merely doused the cloth with handfuls of the sacred water.

After this ritual cleansing, workers stacked firewood in neat piles, laid the body on top and then stacked on more wood in orderly rows. A worker from the temple brought down the eternal sacred fire that had burned in the temple for centuries and lit the wood. The dry wood caught quickly and the flames leapt up, mercifully hiding the body, which was still wrapped in a white cloth.

The amount of wood, not just the type, is critical to ensure complete cremation. If a poor family cannot afford enough wood, and the body does not completely burn, a worker will use a long pole to deftly reposition the limbs over the burning flames.

At some of the fires, a lone man circled and recited a prayer. We learned that this would always be the son or other male member of the deceased’s family. Women were banned from the ceremony for fear that their cries or sobbing would harm the ascendency of the soul to nirvana.

The transfer must be pure and not sad or painful

Near the water’s edge, a huge pile of grey ashes was waiting to be spread onto the holy Ganges. After a cremation, ashes and bits of bone are gathered up and “untouchables” sift them for bits of gold jewelry. We were told by one of the workers that the recovered gold is used to purchase wood for poor families.

But, having been forewarned, I was suspicious when that same person asked for a donation to the cause. This is a common scam in Varanasi and, in fact, was one of the reasons we had hired Prashant to escort us down to the ghats in Varanasi.

Photographing the cremation is forbidden because the act of “taking a photo interrupts the soul’s journey to nirvana.”  Our friend Dave had warned us about taking pictures and about the scam after an unpleasant encounter with touts on the ghats during his visit to Varanasi the year before. And we were cautioned by our guide and by workers at the ghat to be respectful and to be wary of the touts and their aggressive requests for “donations”.

Our guide, however, told us that taking pictures would be acceptable from a discrete distance. Just the night before, in fact, we had taken a boat ride on the Ganges to see the burning ghats in Varanasi from the water. Our guide then had told us the same thing and I had taken photos from a good distance away in order to avoid offending the families.

So I waited this time until we had walked quite a ways from the ghats and the burning funeral pyres. Before taking any photos, I checked again with Prashant to ensure I was far enough away from the grieving families and the ritual. I wanted to be as sensitive as possible.

As I raised my camera, a hand suddenly shot up in front of me and a “tout” who claimed he worked at the ghats suddenly started shouting at me. Another rushed over and tapped me on the arm. I protested that I hadn’t actually taken any photos and offered to show them the proof on my digital camera. They waved my camera away, called me a liar, pointed a lit cigarette in my face and threatened to take me “inside”, whatever the hell that meant.

I was ready for a serious punch up and told them that if they touched me again or jammed that cigarette in my face one more time they would be sorry. Fortunately, for all (but I suspect especially for me), my guide stepped in between us and I decided to walk away, furious but unharmed.

The surly tout followed me along the ghat with his lit cigarette. I turned and jokingly asked him how much he wanted to allow me to take a photo, because he really wasn’t concerned about anybody’s soul he was just using the guilt factor to get money from tourists.

Suddenly his tone changed, “Oh, if you would like to take a photo, you can do so over here, but only if you make a donation to help buy wood for the poor.”

“How much,” I asked. “Whatever amount you feel is good,” was the reply. I was offended by his hypocrisy and money-grabbing approach and wondered aloud, “How much does it cost to pay for a destroyed soul?” He just smiled at me.

Final tips for visiting the burning ghats of Varanasi

Always hire a guide to protect you from the aggressive touts at the ghats, be extra sensitive taking photos at religious sites, and don’t get thrown in an Indian jail over something stupid, no matter how angry you are!

Join this unforgettable and immersive experience in Hindu culture, during this half-day tour. Observe religious rituals on the Ganges and get a real sense of Varanasi by exploring the riverside, charming alleys, temples, and markets behind the Ghats.

One final note. Not everyone is cremated at the Ganges ghats. Children under five, sadhus (holy men) and pregnant women are considered pure and do not need to be cleansed by the sacred fire. They are simply set adrift on the Ganges.