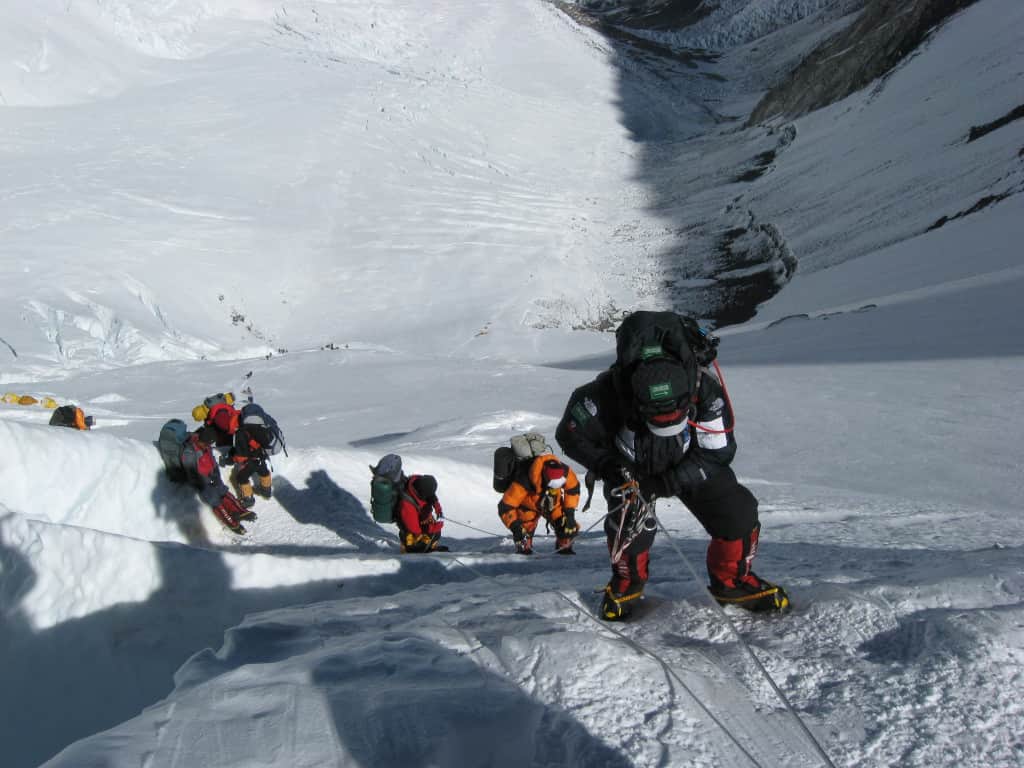 The best time of year to climb Mount Everest is in May. But, there’s still a few dangers of climbing Mount Everest, no matter what month you climb.

Many Mt. Everest climbers gather in Lhasa in China and prepare to conquer the world’s highest peak. It is not an easy adventure.

Wondering whether climbing Mount Everest is the adventure for you? Read on to see if the dangers are worth the thrills!

What are the Dangers of Climbing Mount Everest?

Altitude sickness or mountain sickness is the biggest risk to Mt. Everest climbers and also fresh travelers to Tibet. It will affect many aspects of their health. The higher they get, the less oxygen there is in the air. Their body can slowly adapt to this but only up to a point.

Even with the comparatively lengthy period required to climb this high, they are unlikely to ever feel quite themselves above base camp, and in the Death Zone above 8,000m they are beyond the limit of their adaptation ability to the altitude.

Air temperature drops by roughly 0.65C per 100 meters of height gained. That means at 8,800m they can expect the temperature to be about 57C less than at sea level. That’s a gross simplification ignoring many other factors but they get the idea: it is cold up there.

Managing this is not helped by the fact that they’ll switch from lying still in the darkness at night to slogging up hill with the heat of the sun bearing down from above and reflecting up from the snow.

In the UK it may be a compulsive topic of mundane conversation but in the Himalayas it can mean life or death. The changes in weather is one of the greatest dangers of climbing Mount Everest. Their window of opportunity for summiting will be dictated by a good weather forecast but many are the climbers who have been caught out by storms, holding out a little too long on summit day.

Not least during the 1996 disaster. They can’t control the weather gods but they can get a good forecast, listen to their instincts and not ignore the early warning signs.

One of the highest direct causes of death on Everest is falls. These can happen both when actually climbing, particularly on the high ridges, and also in careless moments at the higher camps. Stepping out of their tent for a wee at night onto ground covered in ice being a particular example.

Maintaining vigilance with their footwork, double checking knots and karabiners, and a good amount of prior experience on snow and ice are prudent steps for reducing this risk.

Twice as likely as falls to get them on the slopes of Qomolangma (Tibetan name for Everest) are avalanches. There tend to be specific areas in which the likelihood of their occurrence is higher. On the two most popular routes (see below) these are the North Col, South Col and Khumbu Ice Falls (the latter being branded “Suicide Passage” for this reason).

They’re all necessary to cross and there’s not a lot they can do to control the mountain itself but they can help by minimising their time in those areas and using the earlier parts of the day before the sun has warmed the snow.

In addition to falling snow, falling ice and rocks are yet more hazards they can face. This is particularly the case if they choose the southeast route from Nepal. There, the former is a risk in the Khumbu Ice Falls (there’s a hint in the name) and the latter when crossing the South Col beneath the Lhotse Face.

These are great cracks that appear in glacial ice which threaten to swallow careless or unfortunate climbers. If they climb from the Nepali side then they will encounter these in the Khumbu Ice Falls and the Western Cwm. To aid safe travel across glaciers, teams tie ropes between each of their members so they can drag out anyone unlucky enough to take a fall.

Easily said but near impossible to avoid entirely, the temptation to push on for “just another ten minutes” is strong in all of us. But combine it with the intoxicating zenith of so much effort and the mind-altering effects of altitude on the danger-ridden slopes of Mount Everest and they have a recipe for disaster.

The practical advice is to have a set “turn around time” at which point they head back down regardless of where they are, is a common tactic to avoid this. Just be realistic when deciding it. There’s no point setting an overly conservative time if they know they’re not going to stick to it.

Something else worth doing is taking the time to go through their motivations for being on the mountain. If they keep the summit in perspective with the rest of the challenge and the rest of their life then it may help stop them from getting carried away.

As there are so many difficulties that may result in death, do not risk your life if you have not been trained professionally.

Actually, it is also a lifetime experience to do a Tibet Everest Base Camp trip, especially during May and June when travelers may meet some Mt. Everest Climbers. Book a base camp trip here.

Good Reasons to Visit Japan in the Winter

How To Travel For Free Or Almost Nothing