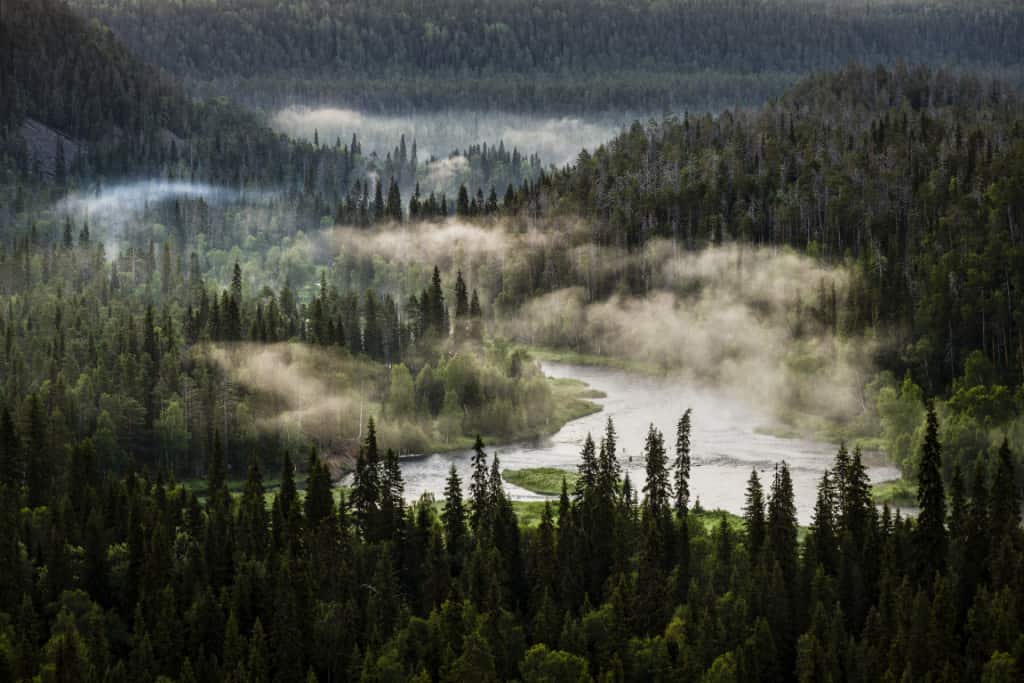 Ruka Kuusamo Finland is a paradise for outdoor lovers and nature photographers.

It is full of beautiful places in the Finland national parks, on the Lappish fells and at the banks of the wildly roaring rivers.

Ruka Kuusamo Finland is packed with beautiful spots to explore. If views are what you’re after, then you need to check out the below spots for the most breathtaking views.

There are no real mountains in Finland, but it is still far from being flat either! Finnish mini-mountains are called fells (“vaara” or “tunturi in Finnish). One of the highest fells in Ruka Kuusamo Finland is Valtavaara, located near popular Ruka Ski Resort. An old fire guard’s hut on top of Valtavaara offers the most spectacular views to all directions.

One of the most popular long hiking trails in Finland, 80 km long Karhunkierros Trail, goes through the top of Valtavaara on its way to the ending point at Ruka. Every May thousands of trail runners rush through Valtavaara while competing in NUTS Karhunkierros Trail Run, running 30-160 km almost non-stop. Depending on the varying spring weather and snow conditions, their conquest is done in either warm sunshine with try feet or through piles of snow and puddles of swamp water. You just have to take your hat off to these adventurous athletes!

Valtavaara is a great place to visit around the year. There’s a 5km snowshoe trail and a 6km hike trail from the nearest parking lot to the top of Valtavaara and back. The hut at the top works as a shelter to hikers and there are also a couple of campfire sites along the trail. You may also spot rare birds such as Red-flanked Bluetrail along the trail to Valtavaara.

Konttainen fell is part of the fell range formed by Pyhävaara, Rukatunturi, Valtavaara, Konttainen and Kumpuvaara, remnants of the ancient Svekokarelid Mountains. Only the hardest rock types at the foot of the mountains have remained until this date. As the rock bed in the area is calciferous and the area’s microclimate is extremely damp, vegetation is surprisingly lush and versatile. The mix of northern and southern species is unique within Finland.

Konttainen is a popular spot for photographing sunrises and sunsets due to an easy and short 2 km hike to the top of the fell. And, of course, due to the great views one can admire at the top towards Riisitunturi fell and Kitka lakes.

The parking spot at the foot of Konttainen is also a popular site for spotting and photographing Siberian Jays while handfeeding them.

The winding river with lush, green banks and untouched forests charms during summer. The changing appearance of the trees along the river create a great mosaic if colors in autumn. Winter scenery along the river is a calming mix of the different shades of white and grey.

Päähkänäkallio area is somewhat difficult to access unless you are prepared to drive along small forest roads or hike along the 80 km long Karhunkierros Trail. But this place is definitely worth visiting! There are no railings at the edge of the cliff and visitors are advised to stay far away from the edge due to the crumbling rock bed, so be careful out there!

“Pyhä” means sacred or holy, and it is known that Pyhävaara has been a sacred place for Sami people, the indigenous people of the north. Until year 1830, a sacred stone called “seita” was located in the top of Pyhävaara. Pyhävaara consists of two peaks and due to the vulnerable nature and the ancient Sami sites access is only allowed to the lower Pikku-Pyhävaara peak.

Pyhävaara is located near Ruka Ski Resort and is a popular day trail hike spot for guests around the year. A popular ski trail goes through Pikku-Pyhävaara peak. Keep in mind though that Finns are born with skis (at least in Lapland) so we suggest giving a go for some easier trails before attempting to conquer Pyhävaara. You might also consider wheels over skis for admiring the snow crowned trees, since Pyhävaara can be accessed with electric fatbikes during winter.

Kitka river in Oulanka National Park has several great location for admiring whitewaters. Myllykoski is one of the most popular places due an easy 1 km hike to the edge of the river near on old mill. Myllykoski is also located along Pieni Karhunkierros Trail, one of the most popular daytrip trails in Ruka Kuusamo Finland. This place is so popular you don’t even need snowshoes to access the place during winter. And due to its popularity it tends to get a bit crowded during June-August.

Part of the popularity is the possibility to get very close to the water at the wooden deck next to the mill and on the hanging bridge leading hikers over the rapid. If you are aiming to hike the whole 12 km long Pieni Karhunkierros Trail, you must cross over four hanging bridges. The bridges are well-maintained and safe to cross, but they may cause some chills if you are suffering of fear of heights.

The Hossa National Park is located in Southern Kuusamo, a bit over an hour’s drive from Ruka village. Värikallio consists of 60 different rock paintings and it is the biggest collection of prehistoric rock paintings in Finland. The cliff itself is a steep wall rising from Somerjärvi lake and the paintings must have been made either from a boat or by walking on ice during winter. Rock paintings are appr. 3500-4500 years old.

We can only guess the reasons the ancient people have had for creating Värikallio rock paintings. Hossa used to be a junction for water routes so the paintings may have been used for marking a route or describing events. The pictures in rock paintings can also be linked to hunting magic and the painted rock walls can also have functioned as cult places of shamanic worship. Pictures may also have been painted in order to guarantee fertility, since many of the human figures portrayed in Värikallio may be women, some of them in labor.

Värikallio rock paintings are different from the other prehistoric paintings in Finland since the small, stick-like elk figures are not actually known elsewhere, and the human figure with a triangle-shaped head, eyes and nose is unique. The lack of boat pictures is also exceptional. All of the pictures found in Finland dating from the Stone Age have been painted (there are no drawings engraved in rock). Red and yellow ochre – obtained by heating iron-bearing clay – were used as coloring agents, and blood, grease or egg yolk as the mixing agent.

One of the most enchanting summer views at Riisitunturi is Ikkunalampi pond that seems to be hanging on the edge of the hill. It is an infinite pool created by nature at the edge of a hanging bog. Usually bogs are formed in natural depressions where water gathers, providing a growth platform to peat moss.

The abundant precipitation and thin soil of the Riisitunturi area enable bogs to appear even on steep slopes. Riisitunturi’s western slopes are covered by Finland’s most impressive and also some of the world’s steepest hanging bogs. In addition to its bogs, Riisitunturi is also a popular place for photographing slow-loaded trees during the winter.

Kiutaköngäs is one of the most famous whitewaters in Finland mainly due to its size and length and the impressive red rock wall at the background of the rapid. Well-marked, short trail leads all the way to the roaring stream. The spring flooding of Oulanka river is a remarkable sight. During winter freezing temperatures create an incredible bridge of snow and ice on top of the rapid.

Get your camera ready, because these are truly some of the most spectacular views in Ruka Kuusamo Finland!

Tips for Holidays in Prague with Kids

Enjoy a Relaxing Beer Spa Experience in the Czech Republic