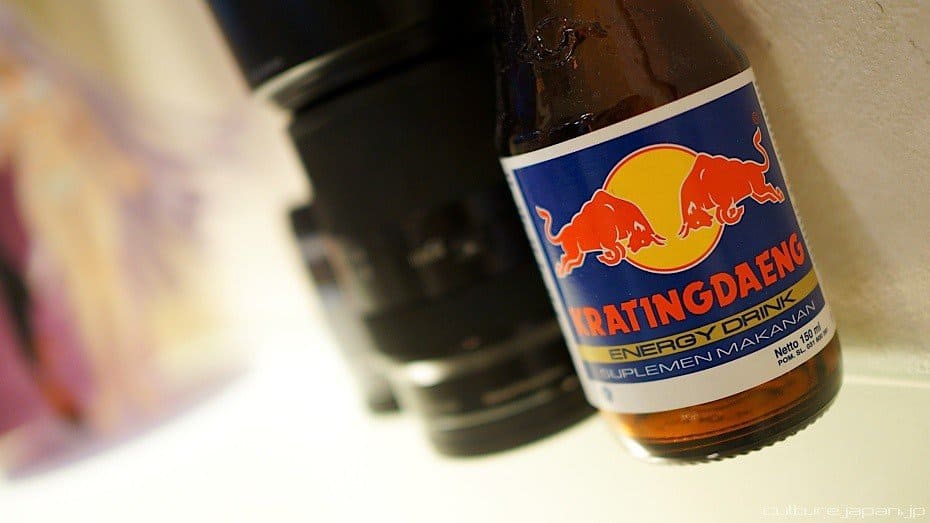 The small can that offers to “give you wings” has been fueling dare devils on its way to becoming the worlds largest sponsor of extreme sports.

Red Bull has proved it supports those athletes it aims for as customers. The name itself has become synonymous with action sports.

Most people believe it was invented by a man from Austria named Dietrich MateschitzIt. Actually it was concocted by a man in Thailand named Chaleo Yoovidhy. Used by truckers to stay alert – some early customers even believed it contained natural aphrodisiacs from bull testicles!

The original name is Krating Daeng

Krating Daeng was introduced to Thailand in 1976 by the ethnic Chinese entrepreneur Chaleo Yoovidhya. Krating is a reddish colored type of bovine while daeng means red. Easily translated to Red Bull. Only later was it westernized by the Austrian to European tastes. Sweetened, carbonated and repackaged. A deal struck between the Thai and Austrian that would later become an energy drink behemoth.

The original Thailand Red Bull still exists in Thailand today and boy does it pack a wallop! Boasting about 3x the potency of Red Bull as we know it. It comes in a small glass bottle about two times the size of a nip. It is not carbonated and differs in taste greatly.

Certainly not meant to be consumed in one sitting, but rather small sips over time to keep you alert. Concentrated non~carbonated and killer kick. I made the mistake of drinking half a bottle after I had a coffee. Within 30 minutes I was off the wall. Hands shaking, jittery doesn’t even begin to describe it. An hour later I was fine. Lesson learned.

The next few days I used it sparingly, pulling swigs here and there throughout the day whenever I was getting sluggish.

After I ignorantly nearly OD’d on the stuff I figured I would share my warning with everyone if you are over in Thailand and in need of a boost and want to try something different.

Energy drinks are hugely popular in Thailand, where they are sold in near-identical bottles for around 10 baht (30 US cents) each at 7-Eleven outlets, corner shops and kerbside kiosks. Their advertising is targeted at low-paid workers working long hours, including taxi, tuk-tuk, truck and bus drivers, and construction workers.

If you want to try it yourself, you can also buy it on Amazon, so you don’t need to go all the way to Thailand to get your fix.

How to Get to Boracay from Manila, Philippines

Saigon: The Pearl of The Far East