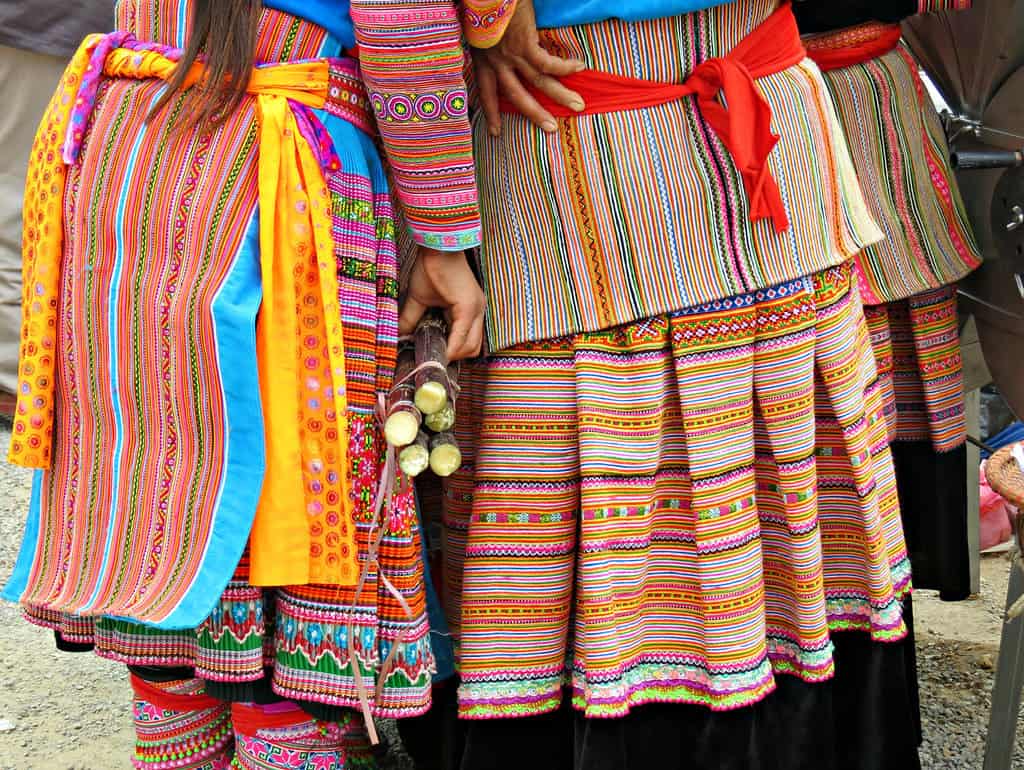 The Thai ethnic has over 1 million of the population and is the third-largest group in Vietnamese people. Here is everything that you need to know about the Thai Ethnic group in Vietnam.

The Thai Ethnic Group in Vietnam

Early in their history, the Thai adopted wet rice cultivation, using suitable irrational networks. The work can be summarized in the Thai saying “muong-phat-lai-lin” (which means digging of canals, consolidating of banks, guiding water through obstacles, and fixing water gutters) in the fields. While the Thai once grew only one sticky rice crop a year, nowadays they have converted to two crops of ordinary rice. They also cultivate widen fields, where they grow rice, corn, and subsidiary crops, especially cotton, indigo and mulberry for cloth weaving.

Diet of the Thai Ethic group in Vietnam

Today, ordinary rice has become the main food of the Thai, while sticky rice is still being eaten traditionally. Sticky rice is steeped in water, put in a steaming pot and put on a fire and cooked. A meal cannot go without ground chili mixed with salt and accompanied by mini, coriander, leaves and onion. Boiled chicken liver, fish gut, and smoked fish called cheo could be well be added to the meal.

Ruminate meat should be accompanied by sauce taken from the internal organs (nam pia). Raw fish should be either cooked into salad (nom) or meat-in-sauce (nhung), or sauced. Cooked food processing ranges from roasting, steaming and drying to condensing, frying, and boiling. The Thai enjoy foods with more hot, salty, acrid and buttery tastes, in contrast to those that have sweet, rich and strong tastes. They smoke with bamboo pipes, lighted by dried bamboo pieces. Before smoking, the Thai maintain their custom of hospitality by inviting others to join in, much as they would do before a meal.

Thai women are beautifully adorned in short and colorful blouses, accented down the front with lines of silver buttons in the shapes of butterflies, spiders and cicadas. Their blouses fit beautifully with their tube-shaped black skirts. The bell is a green colored silk band. They wear a key chain round their waists.

On festivals occasions, Thai women can wear extra black dress, with an underarm seam or like a pullover which has an open collar, thus revealing the silver buttons inside. The black dresses are nipped at the waist; include large shoulders and decorative pieces of cloth that are attached to the underarms or to the front of the shoulders in a manner similar to the White Thai. Black Thai women wear the famous pieu shawl with colorful embroidery.

Thai men wear shorts with a belt; a shirt with an open collar and two pockets on either side. White Thai men have an additional upper pocket on the left and their collar is fastened with a cloth band. The popular color of all clothes is black, pale red, stripped or white colored.

On festivals people wears long black dresses, with split underarm seams and an internal white blouse. A head turban is worn as a headdress, around the carrier’s forehead; at times, pack horses are used. Along large rivers, the Thai are famous for transporting goods and people using swallow-tailed boats.

Up marriage (dong khun) – means the introduction and bringing of the son-in-law to live with the girl’s family, which is a step to test his personality and hard work. The Black Thai women generally adopt the custom of wearing their hair in as bun or chignon immediately after this first wedding ceremony. The son-in-law will stay at his wife’s home for 8 to 12 years.

Down marriage (dong long) – the bringing of the couple and their family.

Women give birth in the seated position. The placenta is put into a bamboo cylinder and hung on a branch in the forest. The mother is warmed by fire, fed rice using a bamboo tube, and must abstain from certain foods for a month. The bamboo tubes are hung on a tree branch. There are rituals to educate the child in gender-specific work and a Lung Tay is invited to the house to name the baby.

Basically, there are two steps in a funeral:

Showing the host his new house, the Lung Ta kindles a new fire. In celebrating a new house, people carry out spiritual rites on the spot, reading spiritual texts to drive away bad lucks and to bring good lucks, and to worship ancestors.

The Black Thai worship their ancestors on the 7th and 8th month of the Lunar Year. The White Thai also celebrate the New Year according to the lunar calendar. Villagers also worship the gods of land, mountain, water and the soul of the central post of the village.

The Thai calendar follows the ancient horoscope or cosmology (which contains 12 key animals) like the lunar calendar. But the Black Thai’s calendar has a time difference of six months.

The Thai have their own Sanskirt-style writing system. Their language is taught orally. The Thai have many ancient written works on their history, traditions, customary laws, and literature.

The Thai perform their xoe dance and play many kinds of flutes. They sing out verses and vivid alternate songs.

Vietnamese New Year – Things To Do and Don’t Do