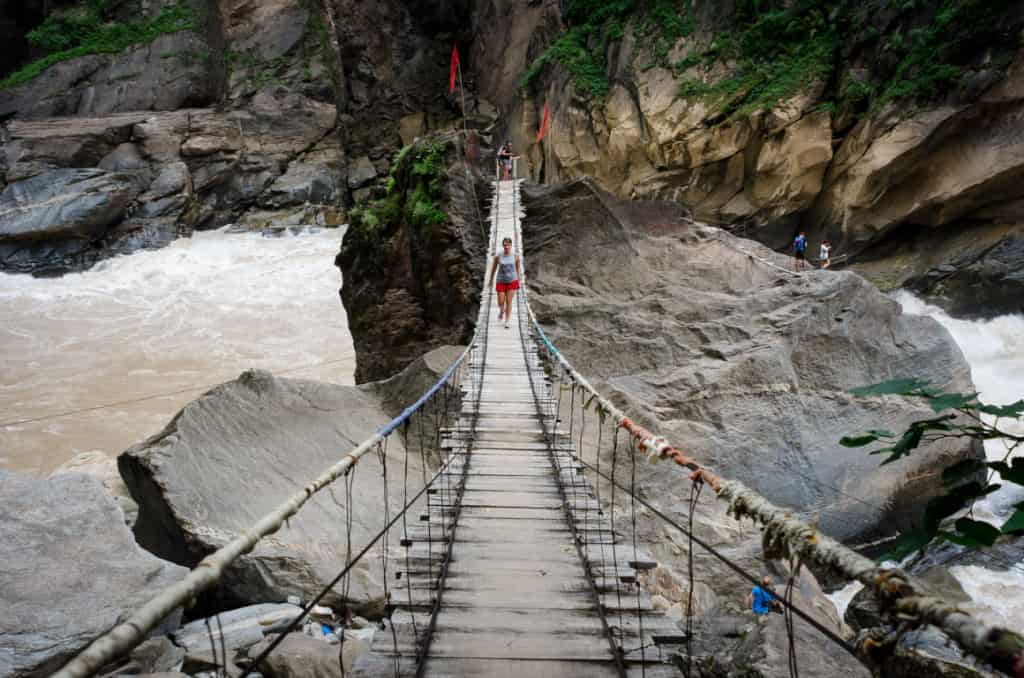 Spectacularly vertical—and equally beautiful—Tiger Leaping Gorge (TLG) is in the northern region of China’s Yunnan Province. Those looking for a combination of accessibility and remoteness will find all the hiking they can handle in TLG’s clear air and high mountains.

Tiger Leaping Gorge lies just a few hours north of the bustling tourist-friendly town of Lijiang. Although a highly overrated destination for Chinese tourists, for those who are perhaps new to China the old-style stone walkways and canals are rather nice, and you should probably consider spending a day (at most) here before moving on.

If you’re looking at doing the Tiger Leaping Gorge hike, we’ve got you covered with what you need to know before you go.

What sets TLG apart from the plethora of paved over, Disney-esque tourist stops in China is that here there is a proper hiking trail that hugs the mountain slopes and cliffs, extending nearly all the way to the opposite end of the gorge. For anyone that has visited a natural attraction in China before, you will understand what a rarity this is.

Getting into the beginning of the gorge itself via the “high road” trail requires several hours of hiking. This weeds out a large majority of the tourist crowd, as they will instead opt for the paved “low road” route, where they sit on a bus and watch scenery whiz past as a tour guide shouts into a microphone. Thankfully, the low road (and its associated activity) are entirely hidden and far below the high trail.

On the high trail, hikers gradually work their way up from a starting elevation of around 2,000 m (6,500 ft), and “top out” at roughly 2,670 m (8,760 ft) after the somewhat strenuous “28 bends” portion of the trail. Although this is relatively moderate in terms of altitude, if you are not used to hiking it would be best to take it slow. Many take this approach by resting or having a meal at the Naxi Guesthouse, which lies just steps away from the trail and offers rooms and food.

Once you reach the top of the uphill slog through the 28 bends, you’ll be rewarded with some even more amazing views and some downhill portions of trail leading to the next stop, the Tea Horse Guesthouse. If you are not in a rush to hike through more of the gorge in one day, this is an ideal spot to spend your first night.

Moving on from the Tea Horse, you work your way further into the gorge and will soon come upon the Halfway Guesthouse. This is an extremely popular stop along the trail and also worth staying at for a night. Their rooftop terrace has some of the best views in the gorge, especially if you are able to catch the sun coming up from behind the peaks.

Further along, there is more or less level trail, some of which meanders near the edge of sheer cliffs. But these sections are minimal. Next comes a few really nice options for the hike—you can either spend a few hours going further along the main trail, which takes you down to the road, or take a much lesser used trail that leads higher up and into a side gorge.

On this hike, I chose to go down because I just had to get up close to the rapids. These should be considered a “must see.” Once you hike all the way down to the road, just continue on past Tina’s Guesthouse, cross the bridge, and keep going past The Bridge Guesthouse. Where the road curves sharply to the left, you should see an area to walk down towards the river. There is a fee of 10 Chinese yuan (CNY) to access this trail.

Continue on along a series of stone steps which work their way down (with the help of a few ladders) among the cliffs and eventually to the river itself. There are a few different paths along the river leading to various rocks, plank foot bridges, and lookout points just above the rapids.

When reading up on Tiger Leaping Gorge prior to my first visit, I came across a lot of whinging on various travel blogs about locals charging “yet again” to access some of these viewing points right on the river. Yes, in addition to paying at the roadside you will need to pay an additional (and trivial) amount here. Do so, forget about, and enjoy the experience.

I spent a few hours on the gigantic river boulders, kicking back, having lunch, and taking photos. Could not have enjoyed more. I paid a grand total of about 25rmb, and that included access to an alternate trail that followed the river for almost 1km before leading up to a dirt road further down the gorge.

For many, this marks the end of the trip. Hikers usually make their way back up the cliff to catch one of the several daily buses from Tina’s Guesthouse back to Lijiang. If you have the time and want to get in more hiking, I recommend an extra night in the gorge. There are more trails in an area loosely referred to as Walnut Village.

It is, however, important to note that the further you make your way up these trails, the less obvious they are and can actually be hard to follow as they are not marked the higher you get. One of these leads to another waterfall, buried way up in a side gorge, and yet another route takes you up above 3,000 m (approx. 10,000 ft) to the end of the gorge.

This last route is the one I took because, after talking with the owner of Sean’s Guesthouse, I was told that it opens up views of the Haba Snow Mountain peak (provided it’s not clouded over) as well as a higher vantage point to take in Jade Dragon Snow Massif.

Not to be taken lightly

This hike is not to be taken lightly, and I would strongly suggest that it not be done solo. From the road, it took approximately four hours of nearly non-stop uphill, and the route was often interspersed with extremely steep, rough sections that required scrambling on all fours to make it up.

Higher up, there were goat trails but after a few hours there was no sign of any trail due to lack of use, overgrowth, and/or rockslides. It quickly becomes clear that you have to use your judgement and find what seems the best route up through the heavy growth of stunted trees.

Having said that, I consider this part of the hike to be one of the highlights of the trip. Reaching a natural viewpoint off the beaten path, and then taking in the expansive view of almost the entire gorge, backed by ever taller sheer cliffs.

Itinerary of a short trip to Kyushu, Japan