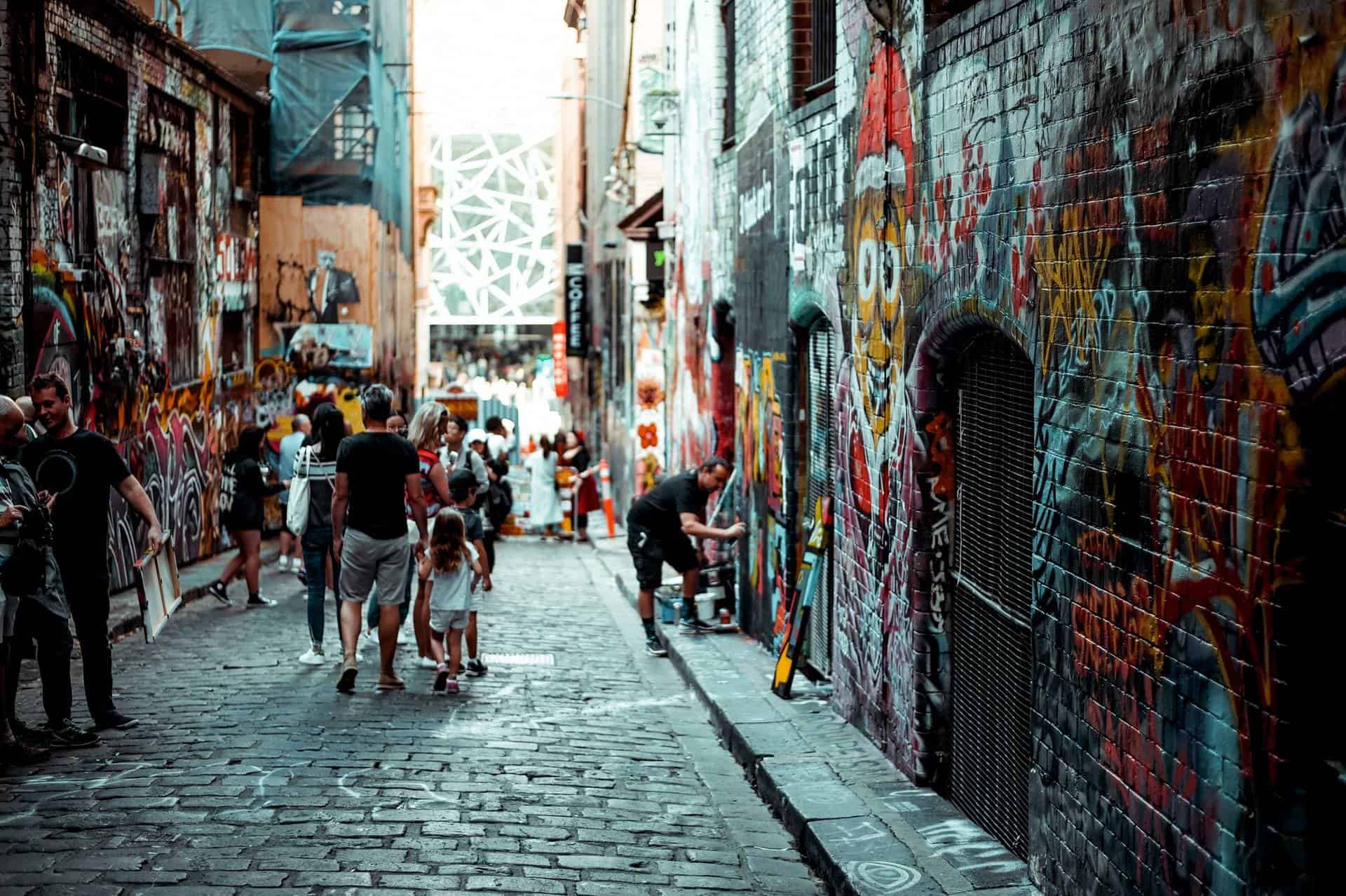 There is no doubt about it; Australia is an expensive place to holiday.

Flights to the continent at the bottom of the earth are costly and then there are accommodation and entertainment costs that will quickly drain a meagre travel budget.

But that is no reason to leave Australia and its second biggest city Melbourne, off your itinerary. We’ve got the tips for how to experience Melbourne on a budget!

No other city in Australia is so diverse and rich in different styles, cultures and lifestyles as Melbourne. There is a Mediterranean atmosphere in the metropolis, which is called the cultural capital of Australia.

Under the influence of the many immigrants who since the start have established in Melbourne, the city has become a melting pot of peoples and cultures. This population composition ensures that the young city in constant motion.

Melbourne on a budget

Listed below are some tips for seeing the best that Melbourne has to offer on a tight budget.

Melbourne is obsessed with Australia Rules Football, a game, as the name suggests that is played only in Australia. A standard ticket to see a game costs more than $20 however at Melbourne’s biggest sporting ground, the Melbourne Cricket Ground (MCG), the gates are opened at three quarter time, mainly to allow for the losing side’s supporters to make a humbled exit from the venue. For the budget savvy traveller this means that you can get in and watch the final, and most exciting quarter of a match for free.

Eating in restaurants quickly eats up your travel dollars. Self-catering is the way to go if you are on a budget and a great way to combine sightseeing with shopping is by going to the Queen Victoria Market. The Queen Vic, as it is known to locals, has been on the same site since 1878. The deli hall has all sorts of goods from fresh made pastas, sandwich meats and homemade dips. The fruit and vegetable are also fresh and cheap.

Queen Victoria Market is the largest open-air market in the southern hemisphere, with over 600 traders selling everything the palate could desire, and shouting out their tempting offerings in traditional market style. On Sunday the produce stalls are replaced with clothing and knick-knacks – great for finding something weird and wonderful. In summer the market is open on Wednesday evenings from 17:30 to 22:00, when it features hawker-style food stalls, music and dance performances.

Melbourne is known for its vibrant art scene. A few of the free galleries to check out include the National Gallery of Victoria and the Australian Centre for the Moving Image, known by the cute acronym ACMI, which has changing displays based on digital culture.

Set in an imposing boom-style terrace, the Alcaston is a contemporary Australian art gallery, focusing on living indigenous artists. The gallery works directly with communities and is particularly attentive to cultural sensitivities. There’s also a space dedicated to works on paper.

However art is not just confined to stuffy galleries in Melbourne. Hosier Lane, near Flinders Street Station is an outdoor gallery of street art which is always evolving. Every available space in the laneway is spray painted, stencilled or postered with designs including the rubbish bins and metal bars of gates and because it’s a laneway it’s always open.

Hundreds of elegant black swans and a plethora of exotic water birds including pelicans, cormorants and herons will greet you as you stroll around the 5km perimeter of this beautiful lake. Lakeside Drive was used as an international motor-racing circuit in the 1950s, and since 1996 the revamped track has been the venue for the Australian Formula One Grand Prix each March. The lake offers stunning views of down-town Melbourne, so worth the visit for a bit of camera action.

The red archways across both ends of Little Bourke St’s Chinatown are your gateways to clattering woks, glowing neon, exotic aromas and shops with floor-to-ceiling chambers of medicinal herbs and tinctures. Melbourne’s Chinatown dates back to the 1850s when Chinese prospectors joined the rush to find gold. In the 19th century the single-storey brick buildings once housed brothels, opium dens and boarding houses. It’s the best place for yum cha (dim sum) or sea slug in Sichuan sauce for the adventurous eater!

Flinders Street Station for a schooner in a dirty old boozer!

Melbourne’s first railway station, Flinders Street, was built in 1854 and designed by two railway workers who ensured fabulous facilities for their fellow workers. Sadly the station is in disrepair but in its heyday buzzed with a concert hall, a library, and even a ballroom. Now it’s reportedly one of the busiest train station in the Southern Hemisphere!

Enjoy a schooner (slightly smaller than a pint) in the city’s iconic pub Young & Jackson’s, which sits opposite the station and has been in service for over 140 years. It’s also famous for the naked young lady who hangs around upstairs! The nude portrait Chloe, painted by Jules Lefebvre, caused an outcry in the puritan Melbourne of 1883. Public opposition saw the painting taken down from the National Gallery of Victoria and bought by the hotel in 1908.

While there are loads of ways to experience Melbourne on a budget. If there’s a little bit of room in your budget to splash out…we recommend some of the below typical Melbourne experiences to add to your bucket list.

Eating and Drinking in Fitzroy Street

Melbourne was founded in 1835 after it was found in the area around the city of gold. The inhabitants of the city are proud. Much more than people from Sydney, they love their city.

The population of Melbourne loves the good life and loves to eat and drink. Throughout the city you can find cheap food and drink, but in some parts of Melbourne going out to eat can get pricey. In the district around Fitzroy Street bars and cafes are piling up.

Around Brunswick Street are the best pubs and bars tucked away in the narrow alleys called laneways, that wind through the area.

Cozy little bars are filled with young and artistic city residents, getting together to the famous Melbourne to drink coffee. Many former residents of the city say they still miss Melbourne’s coffee times.

For a good cup of coffee, you can also go to the Federation Square. This square was built in 2001 to celebrate Australia and the centenary of the state.

The modern design of the square stands in stark contrast to the Victorian buildings that define the face of Melbourne.

During the long summer evenings it is an ideal place to enjoy the view over the Yarra River and the Botanical Gardens. During the Australian Open tennis tournament, mad people of Melbourne follows the matches on big screens at the Federation Square.

Melbourne is a sports town as shown by the several major sporting events that are organized every year.

Besides the Australian Open there is also the Formula 1 Australian Grand Prix held in Melbourne. The final of the long Australian Rules Football season is played in Melbourne too. Though, these are probably the least budget-friendly times to visit Melbourne.

The most important sporting event is the Melbourne Cup, the horse known as ‘the race that stops the nation’. Dressed in gala dress attracts everyone to the Flemington Race Track to gambling.

Besides a sports city, Melbourne is also the cultural center of Australia. Every night of the week there are concerts, shows, club nights and festivals organized throughout the city.

The night is long in Melbourne. Only around sunrise are the young people of the city after a party night.

One of the areas holding many nightclubs is St. Kilda. An additional advantage is that just a few steps from the club, you can stretch out on the famous beach of Melbourne.

We’ve searched high and low for the best budget-friendly accommodation options in Melbourne – for all types of travelers!

Part restaurant, part bar, part hotel, this multitasking space was established way back in 1868, but came back on the scene after a heritage-friendly refurbishment in 2013.

A hotel with all the features without a high price: onsite bar, restaurant, fitness centre, plunge pool, spa and sauna. Plus, it’s located in the highly sought-after Little Collins Street.

Centrally located with both shared dorms and private dorm rooms. If you want to splash out for a private room, you can get a balcony, en suite and coffeemaker (depending which tier you opt for).

A great option for families, offering spacious two-bedroom apartments with a kitchen, lounge area and space to chill out.

P.S – check out our guide on staying at a hostel to make sure you have an epic experience!

Interested in the big Australian cities? Check out these posts: