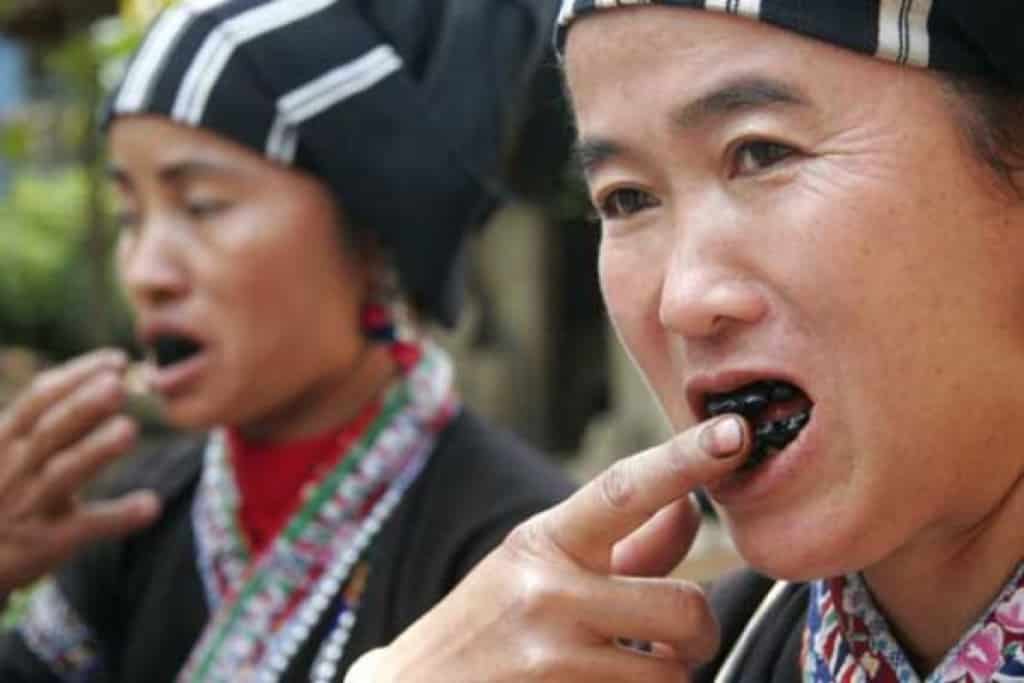 Asia is a land full of weird and wonderful customs and rituals. Throughout the continent there are thousands of different traditions that remain alive and these customs often stem from religious beliefs that have been faithfully upheld for thousands of years. One of these is the tooth blackening of the traditional Vietnamese tribes.

Trekking through the gentle mountains of Northern Thailand, Laos and Vietnam is a great way to experience these traditions first hand.

A strangely interesting custom that is often misunderstood is the Vietnamese ritual of tooth blackening or tooth lacquering. Tooth blackening is not totally uncommon for Vietnamese people living traditional lives. Many tour guides still tell tourists the blackening is the result of chewing betel nut which isn’t entirely true.

It is a mild stimulant that comes in the form of a tiny parcel made up of betel nut, the fruit of an Areca tree and lime paste wrapped in a leaf of the betel pepper vine. It is chewed in a similar way to tobacco and this stains the teeth.

It is actually quite easy to spot the difference between blackened teeth and those stained by betel nut. The betel nut stains the teeth a dark red/brown color and the constant chewing and spitting is also a clear sign.

Betel nut can be found all over Asia, predominantly in areas occupied by hill tribes, but the more abrasive procedure of tooth lacquering is a tradition that only really remains in Vietnam.

Mrs. Nguyen Thi Pham, a 67 year old Hanoian, dressed in a loose silk blouse, black satin trousers, a jade bracelet and necklace described the ritual blackening of her teeth when she was 17. Pham waves her slender gold-ringed fingers as she described the party-like atmosphere of the ceremony…

Her grandmother blackened her teeth as the rest of her family looked on joking and making joyful comments to her as her mouth was being “painted.” There needed to be three applications (every other day for a week), because natural saliva washed off the original application of chemicals. For that period of time she could not eat solids and could drink only through a straw.

The ritual certified that she was “grown up and ready for marriage.” Although it was not a painful process for Pham, I have spoken to other women who recall that their mouths swelled up or that their gums burned and stung for days. The procedure can take place sometime after the age of ten when the child has all her permanent teeth, but is usually done after menarche.

The chemical ingredients used to blacken the teeth can take several forms.

In Vietnam it is common to use red sticklac, a resin obtained from secretions of a tiny aphid-like insect that sucks the sap of a host tree, as a dye.

The resin is diluted with lemon juice or rice alcohol and stored in the dark for a few days. It’s then applied with pressure to all the teeth. An application of iron (mainly from iron nails) or copper from green or black alum and tannin from Chinese gall reacts with solution to give a blue-black insoluble coating.

In other areas of Southeast Asia coconut husk is burned to form a black sticky char that is then combined with nail filings and adhered to the tooth surface until the dye “takes.”

The traditional method once used by the Japanese was to make a mixture by soaking iron fillings in tea or sake. This liquid then turns black upon oxidation of the iron. Spices like cinnamon, cloves and anise were often added to the resin to reduce the harsh chemical taste of the dye.

As with most Asian traditions, there are long standing cultural reasons for tooth blackening.

It was believed that only savages, wild animals and demons had long white teeth. The filing and blackening of the teeth was also a popular procedure and assurance that one would not be mistaken for an evil spirit.

Similar procedures of tooth blackening and filing were also performed by tribes from Indonesia and the Philippines. Back in 1938, a French survey found 80% of the countryside folk of Vietnam had blackened teeth. Medieval kings of Vietnam and other Southeast Asian countries also blackened their teeth.

The procedure has been quite popular throughout Asian history.

But when the French came to Vietnam, they did not appreciate the implied beauty and the procedure was discouraged.

Since then the numbers of Vietnamese dropped drastically, but in these modern times the traditional people of Vietnam are once again trying to revive an almost lost tradition.

Are you interested in joining a hilltribe trek where they do this tooth blackening ritual? Check out the below:

Things to Do in Ubud + What to Eat

Traveling During Ramadan to Muslim Countries