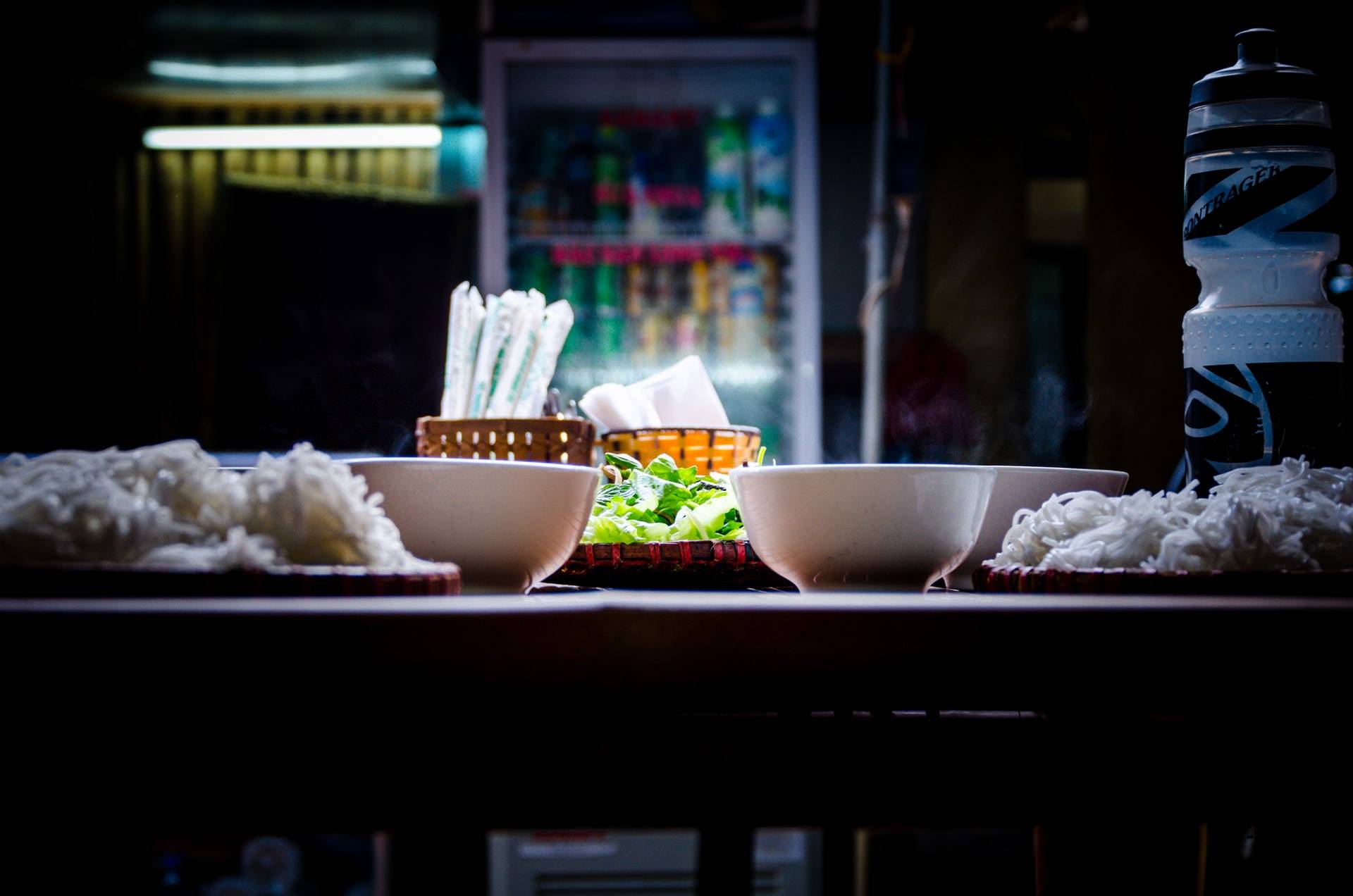 Hanoi and its environs are the birthplace of many quintessential Vietnamese dishes, such as pho and bun cha, and the city is often cited as one of the world’s great food capitals.

It is also a street-eater’s paradise, with a plethora of options for those who want to eat like a local. In fact, many swear that the best food in Hanoi is found on the sidewalk, with dishes that often feature fish sauce, lemongrass, chilies, and cilantro and other fresh herbs.

Although vendors often cook in small shop fronts, they serve their wares on the sidewalk, on small plastic tables and chairs that can seem woefully inadequate for overgrown foreigners.

When in the city, you absolutely have to try out the street food in Hanoi!

Top Vietnamese Dishes You Should Try in Hanoi

Here’s the best food in Hanoi – all local, Vietnamese dishes to sample!

Possibly the most delicious food available to man, bun cha is the lunch of choice all over Hanoi. Pork patties and slices of pork belly are grilled over hot coals and served with fish sauce, tangy vinegar, sugar and lime, which, when combined, creates a sort of barbecue soup that is eaten with rice vermicelli and fresh herbs. Accompanied by deep-fried spring rolls, this calorically rich dish is served with garlic and chilies on the side for an extra kick.

As the birthplace of pho, Hanoi is ground zero for the fragrant rice noodle soup served with fresh herbs that has become popular all over the world. It’s no surprise, then, that Hanoi’s pho is outstanding. Two variations are most popular: pho ga (with chicken) and pho bo (with beef). Pho is traditionally served as a breakfast food, so you’ll find pho sellers all over town from before dawn to mid-morning.

Freshwater crabs flavor this tangy tomato soup that’s made with round rice vermicelli and topped with pounded crabmeat, deep-fried tofu and, often, congealed blood. An odoriferous purple shrimp paste is offered on the side, but don’t be afraid — it tastes delicious. Chilies and fresh herbs are the finishing touches for a complete one-dish meal.

Ly Van Phuc is its official name, but the place is colloquially known as “Chicken Street” in honor of the tasty poultry being barbecued up and down this crowded alley. Grilled chicken wings and feet, sweet potatoes and bread that’s been brushed with honey before being grilled are served with chili sauce and pickled cucumbers in sweet vinegar. The simple, enticing menu is nearly identical for all the vendors on the street.

In the morning you’ll find the sticky rice vendors out hawking their wares. Sticky rice is a hugely popular carb-rich breakfast food that comes wrapped in a banana leaf. There are dozens of variations on the dish. One is served with crushed peanuts and sesame salt, another involves white corn and deep-fried shallots.

Okay, technically not a Vietnamese dish. Coffee was brought to Vietnam by the French and is, along with baguettes, one of their lasting culinary legacies. Beans are grown in Vietnam and roasted, often with lard, before being ground and served in single-serving metal filters. Drinking a cup of cafe nau da, iced coffee with condensed milk, on a busy side street is one of Hanoi’s great pleasures.

You can find many types of excellent spring rolls all over Vietnam, but nem cua be, made with fresh crab meat, are particularly good. Unlike regular spring rolls, they are wrapped into a square shape before being fried. Nem cua be are a specialty of Hai Phong, a seaside town not far away, but are fantastic in Hanoi as well.

Toast has nothing on chao ca, so if you’re looking for a satisfying breakfast in Hanoi, why not try a steaming bowl of fish porridge? Like Chinese congee, it’s a rice gruel made by cooking down the grains until they are nearly liquid. In Hanoi, it’s most often served with green onion, sprigs of dill and slivers of ginger.

There’s no greater pleasure than drinking on a busy Hanoi sidewalk, and what better to nosh on at while you do than muc nuong? Dried squid is grilled over hot coals before being shredded and served with a spicy sauce. It’s a chewy treat that is best washed down with shots of rice wine.

Are you a beer drinker?

Here’s the best beer in Vietnam that you should try out!