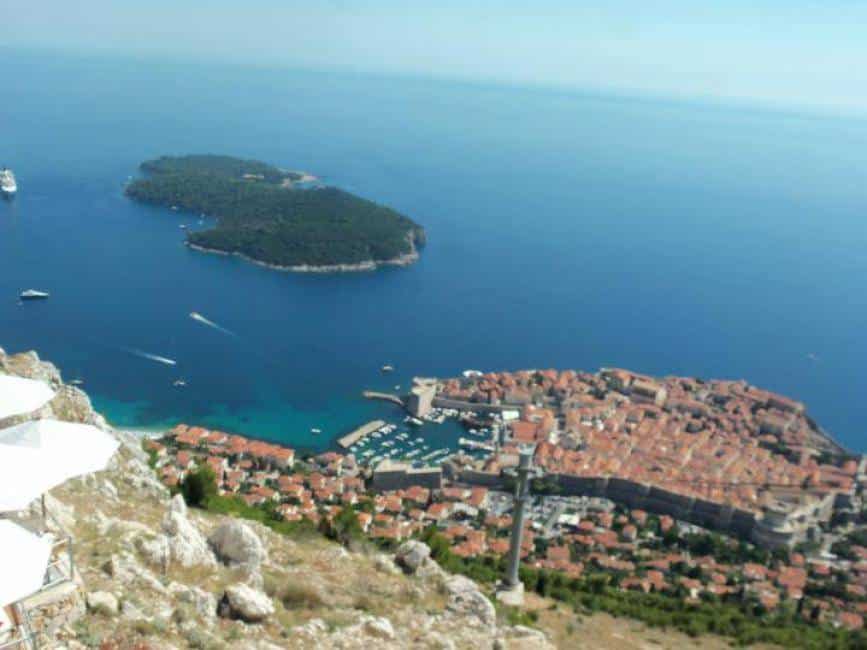 I am excited to write about my love for the beautiful country of Croatia!

This will actually be a two-parter. The first post on Dubrovnik, Croatia and then a second feature on Split, Croatia!

Mr. Z and I went on a Mediterranean cruise leaving from Venice, Italy so we got to Dubrovnik a different way than flying there.

Although located only 12 miles away is an International airport! When we arrived in Split, we flew in which is another post itself. Yes, we missed our boat and had to fly from Turkey to Germany and to Split.

When arriving to the port, what looked to be a small, old city was one of the most breathtaking views we’ve seen. Being tendered in from a small boat, I knew I was going to like this place. It was picture-perfect!

Dubrovnik, a medieval walled “Old City” with its pristine marbled streets and tile roofs was maybe the cleanest city I’ve ever seen. With just over 42,000 in population, the streets don’t even seem real, the large open-air plaza is great, the cafes are tucked in alleyways and side streets and the locals are as friendly as friendly gets.

When my parents visited Dubrovnik a few years back, they opted to walk around the city along the walls which is a little over a mile long.

Mr. Z and I decided to ride the cable car which brought us to the top of a mountain with a breathtaking view of the city, the Adriatic Sea and the Dalmatian coastline that continued on and on.

After seeing this, it’s no wonder celebrities and the newest money come to vacation here. This place is beautiful!

After viewing the city from the observation deck, Mr. Z and I decided to grab a beverage and a light snack at the Panorama Restaurant.

Is this even real, is this possible? Just look at this view! Now that’s a sight to see!

No wonder cats tend to run wild around this place. If I was a stray, I think I find myself just where they are! 🙂

Get lost on the streets of Dubrovnik

You’ve heard the words “Get lost in Italy?” Well the same should be known to do in Dubrovnik. Wandering up and down the steps, through the alleys, in–and-out of shops and boutiques…get to know Dubrovnik and good things shall happen!

It did for us; as wandering led us to a small courtyard where we happened to walk inside a shop that felt like we were walking into someone’s living room, filled with jewelry and artwork.

We were approached by an elderly woman who was the sweetest lady ever and spoke English very well. She greeted us and told us to come further into the house where she explained it was her sister’s house, but it doubled as a boutique/shop/studio. She sold local artwork and handmade jewelry that she was eager for me to try on.

Of course she would put the priciest items on me and would show Mr. Z, telling him to buy it for me. That still cracks me up.

As I was walking around looking at her items, she was trying to engage in a serious conversation with Mr. Z who was actually feeling a little ill that day. She tried to elaborate more on political and war topics, so I kept “browsing” the jewelry line, leaving Mr. Z to discuss. Sorry Z!

After an hour or so of being in the home and her offering us to stay for a meal and drinks, we opted for a great bracelet as we had to rush back to the cruise port.

We were able to spend more time in Split, Croatia, but I will tell you if you ever have the chance to visit Dubrovnik, I highly recommend it. It’s a hidden gem that more people need to see.

Plan Your Summer Vacation to Austria

Tourist Alert! What NOT to do in Rome

Skiing and Snowboarding in Switzerland