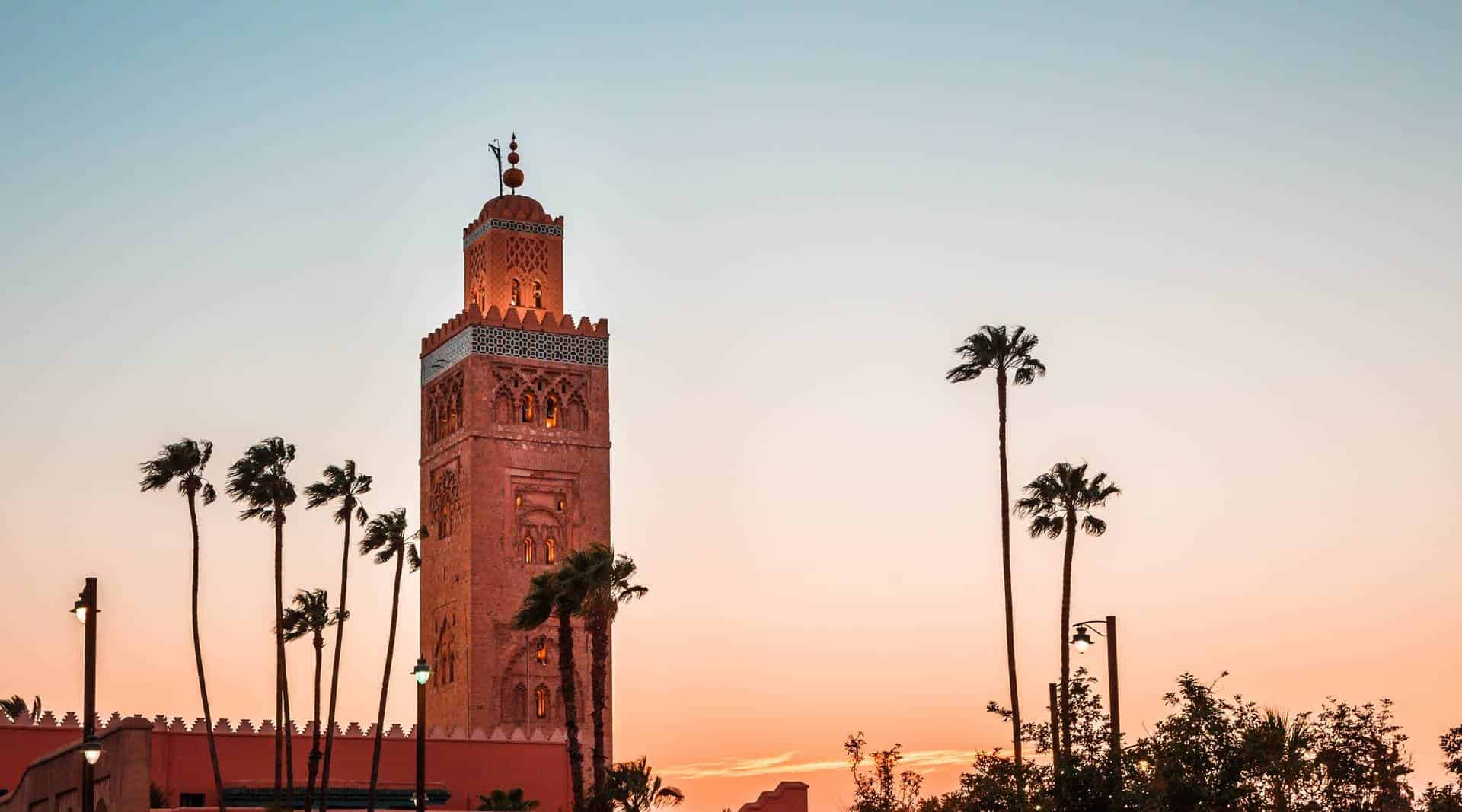 Marrakesh is packed with sights, smells, sounds, and exotic experiences. It’s a highlight on many Moroccan itineraries and a must see for tourists in Morocco.

We’ve pulled together a few top tips for those traveling to Marrakesh – including things to do and not to do.

Here’s how to experience the best of Marrakesh!

Something to see in Marrakesh

When you can pull away from the souks and Jemaa el-Fna (a hard move but a necessary one) make sure you check out some of Marrakesh’s thriving and underrated art scene – start at the Medina’s hidden culture house – Dar Bellarj (from the Madrasa Ben Youssef, look for a door emblazoned with a Stork’s head!).

Something not to see in Marrakesh

The Bahia Palace always makes it on the ‘must-see’ lists for those traveling to Marrakesh but the reason baffles me. It is a small and bare palace that has only one worthwhile feature (an inticrate harem courtyard plump with orange trees), nothing compared to the splendour of Dar Si Said or the Musee de Marrakesh.

Something to eat in Marraksch

Fresh figs can be found all over the city, piled precariously high on push-carts. Snack on a couple for a dirham or buy a whole bag, nowhere else in the world can do them quite as well!

Something not to eat in Marrakesh

Massive pots of boiled snails can be found in the nightly food markets of Jemaa el-Fna. A small bowl will set you back 5 dirhams (50p) but its a very acquired taste – the slippy and briny creatures have to be slurped out of the shell  and they taste much as they look. The French smother them in garlic and Moroccans often order plates of spices at the stall – but a bowl of them on their own is a challenge to stomach!

Something to do in Marrakesh

Indulge yourself at a Moroccan hammam when traveling in Marrakesh – the traditional town baths are single-sex only but the city is bursting with gorgeous riad-spas offering the scrubs (‘gommage’) and massages for couples. Be prepared either way for nudity and always bring some spare underwear!

Something not to do in Marrakesh

Follow the street kids out to the Tanneries. Around the Madrasa unofficial ‘guides’ abound offering a slice of ‘real’ Marrakesh with a tour to the leather-makers district. Although this is rarely dangerous, I have heard rumours that people here (away from the undercover tourist police) can be uncomfortably pushy and it can end up costing you a fair bit for a pretty grim tour.

Somewhere to stay in Marrakesh

Dar Rocmarra is my riad of choice. It’s an easy walk from the main square and the souks, but also near the less touristy bustle of Rue Bab Doukkala. This riad is perfectly situated. It is tucked down the narrow alley ways behind an unassuming door. Inside, it has a tranquil open courtyard and plunge pool, a lovely roof terrace, individually designed rooms, and a friendly team of Moroccan staff.

Somewhere not to stay in Marrakesh

Many of the big hotels line the broad boulevards of the New Town or Ville Nouvelle. Although this area is vastly underrated (it boasts fancy shops, contemporary art galleries, and the famous Jardin Majorelle), staying here denies you the quintessentially Morrocan experience of a riad and roof terrace – it just feels altogether too French.

Somewhere to shop in Marrakesh

Shopping is definitely something that you’ll be doing when traveling to Marrakesh.

The boutiques on and around Rue de la Mouassine and Rue Dar el Bacha are some of the most beautiful and surprising in the city. These range from celebrity stalwarts such as the tardis-like emporium of Khalid Art Gallery to the relaxed artisan centres of the Fundouks (handcraft centres converted out of old caravansereis).

Read our guide on bargaining advice for shopping in Morocco.

Somewhere not to shop in Marrakesh

It should go without saying but don’t buy anything from the stalls immediately surrounding the main square of Jemaa el-Fna – the prices are understandably inflated and the service dismissive. Delve further into the souks for souvenirs or try the fundouks and the Flace des Ferblantiers for a more relaxed experience.

More tips for traveling to Marrakesh

Not many tourists visit this Koran School, it is literally hidden in between the old, medieval city centre of Marrakesh, Morocco.

The school was founded in the 14th century and students here memorized the Koran by rote.

Visiting Marrakesh is all about the Djem El Fnaa square and the soukhs. But do spare some time to visit this marvelous piece of architecture.

Even the way up to this school is interesting as you will walk through narrow and dusty streets: the real Marrakesh.

If you want to eat well in Marrakesh, do what the locals do and eat at the food stalls in the square. It is a common misconception that these stalls are here for the tourists. Actually, they have been in existence long before Marrakesh became a tourist destination.

All of the stalls can be regarded as perfectly safe to eat at. They are strictly licensed and controlled by the government, especially now as it is a popular destination for tourists. In little back streets the ambiance is more quiet, although the price is higher and the quality may vary a lot.

Touts for Djemaa huts can be among the most persistent in Marrakesh. Don’t make them any promises you don’t intend on keeping or they’ll get mean and call you a liar. The line ‘we already ate’ seems to work well to get them to stop.

Take care eating the offered food on the main market place Djemaa El Fna and the other cheap restaurants. Many of the dishes, including goat heads and bowls of local snails (hot and tasty) may seem too adventurous for the Western palate, but the main problems are salads, which can cause diarrhea. Vegetarians will find that there are few options outside the ubiquitous Tagine avec Legumes.

Looking for more Morocco tips? Check out these posts:

What is Madagascar Known For?

Unique Things to Do in Cape Town