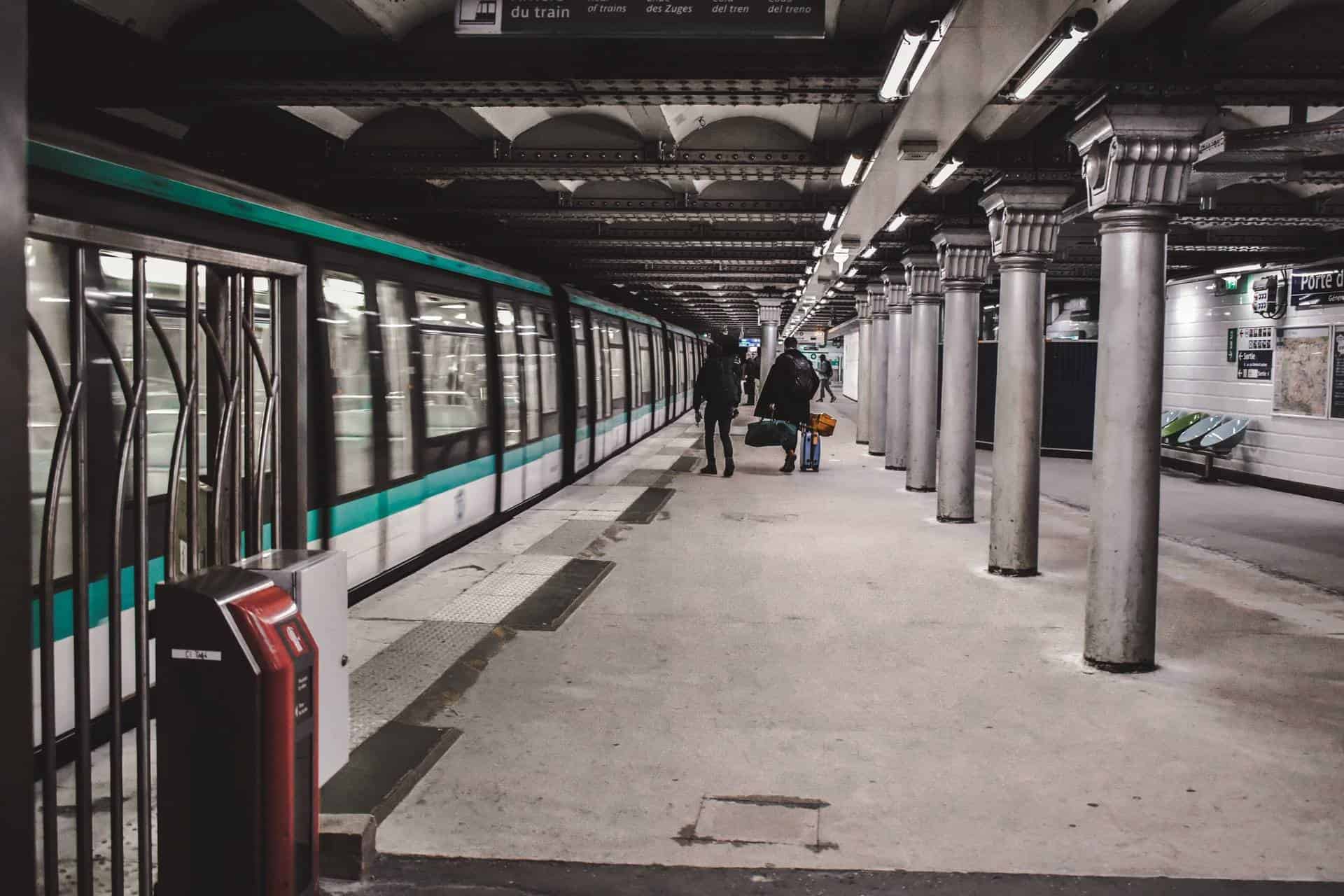 There are many incredible things to note about Paris, one of which is lesser-known but is one of the best parts about travelling to Paris: the Paris metro! Paris has an excellent underground train system, known as the Métro (short for Chemin de Fer Métropolitain i.e. Metropolitan Railways). And it is definitely something worth noting – and using!

Using the metro in Paris is much like using most other metro systems around the world, so if you are stressed about using this mode of public transportation, don’t be worried or panicked.

Although you will probably take the RER subway train from the airport to Paris, do not get confused by this common error: RER isn’t the name for “French subway train”, and only a few large stations service the RER network of trains. You can find out more about the metro on the Paris metro website (ratp.fr).

A guide to using the metro in Paris

You’ll want to look for the Métro stations, marked with a large “M” sign.

The very first thing that you need to know is that there are 16 Métro lines (lignes) (1-14, 3bis and 7bis) on which trains travel all day at intervals of a few minutes between 5AM and 12:30AM (Saturday night/Sunday morning: 01:30AM), stopping at all stations on the line. Times for the trains can be seen on an electronic scroll board above the platform – they are hard to miss, don’t worry. Line 14, which is fully automated, is called the Méteor.

Generally, except for early and late hours, travellers should not worry about specific Paris metro train times; just get to your metro station and take the next train which will likely be in 5-10 minutes.

Also, keep in mind that the metro Paris lines are named according to the names of their terminal stations (those at the end of the line). If you ask the locals about directions, they will answer something like: “take line number n toward “end station 1”, change at “station”, take the line nn toward “end station 2″ etc.” The lines are also colour-coded.

RER trains run at intervals of about 6 – 7 minutes, and stop at every station within the Paris metro system. Although a regular subway ticket can be used within Paris (Zone 1), it is necessary to pass the ticket through the turnstile when passing between the subway and the RER lines, as the two systems are separate networks. This ticket is necessary to both enter and exit the RER networks, as the RER trains travel on to the Parisian suburbs, outside the zone where a regular subway ticket can be used.

Beware that travelling outside the city centre without a valid RER ticket will get you fined, and the packs of inspectors who roam the system show no mercy to tourists pleading ignorance. In particular, CDG airport is not within the city, and you’ll need to purchase a more expensive RER ticket to get there.

For travel outside of the Paris zone, the train arrival times are shown on a monitor hanging from the ceiling inside the RER station above the platform. Information about the metro lines and the Paris metro stops are presented on a separate board also hanging from the ceiling. It is important to check this board before boarding the train, as not all trains make stops at all stations on a given Paris city line. Four letter codes (VERA, TOPU,…) are used for the RER and suburban trains. The first letter indicates the destination of the train, the others may have other meanings or have been chosen to make it easily memorized. You can look up what these codes mean on information panels in the station, but the easiest and fastest way is often to check the board hanging from the ceiling.

RATP is responsible for public transport including metro, buses, and some of the high-speed inter-urban trains (RER). The rest of the RER is operated by SNCF. However, both companies take the same tickets, so the difference is of little interest for most people except in the case of strikes (because RATP may strike while SNCF does not, or the other way round). Current fares can be found on their website. Basically, as you move further from Paris (ie into higher zones), tickets get more expensive.

For the metro, a single ticket (ticket t+) costs €1.90; however, it is generally not advisable to buy tickets by the unit and to rather purchase a carnet of ten tickets, which can be bought for €16 at any station, that will bring the price per ticket down to €1.60 (prices as in March 2022).

Tickets named ‘Tarif réduit‘ may be purchased for children under the age of 10 but only in a carnet of 10 for €7.45. Both tickets are valid for unlimited metro and RER or bus and tram transfers for one hour.

RER + Metro and Bus + Tram are two separate systems, although they use the same tickets. This means you have to use a new ticket if you transfer from bus to metro or from metro to bus. Thankfully, tickets do not expire.

A 1-day ticket, a weekly pass, and a monthly pass are also available. The price varies according to the zones for which the ticket can be used. The cheapest 1-day ticket called Mobilis, is valid for zones 1-2, with a price of €5.90.

Once bought, it is necessary to write in the spaces provided on the ticket:

Unfortunately, this ticket is not valid for use for travel to/from Charles de Gaulle airport. Unless you plan to make many trips in one day, the carnet of ten tickets (for €1.60 per trip) will still be a much better cost than a 1-day ticket. But in considering your options, consider the price for all members of your group/family, including children, which days you are travelling on, and in which zones you will be travelling.

For travellers under the age of 26, there is a special ticket (Jeunes 26) that you can purchase for use on the weekends or holidays. The price varies depending on the number of zones you wish to cover (Zones 1-3 is €3.30 and Zones 1-5 is €6.60; there are other zone combinations available too) and the ticket is good for one day of unlimited usage of the metro, RER, bus, and trams.

See also: A Guide to the Arrondissements of Paris

If you’re staying a bit longer, the weekly and monthly passes are called Carte Orange (1-week pass, €17.20 for Paris and inner suburbs), and the monthly Carte Orange Mensuelle (1-month pass). Note that an Hebdomadaire (eb-DOH-ma-DAYR) starts on Mondays and a Mensuelle on the first of the month. The Carte Orange is non-transferrable, and therefore requires the user to provide information on the pass after the sale.

Since 2008, the Carte Orange is sold as a refill of a “Navigo Découverte” no contact pass. This pass is sold for 5€. You must write your last name (nom), your first name (prénom) and stick your photo on the nominative card.

After, you have to refill your pass with a Carte Orange Hebdomadaire (1-week pass), or a Carte Orange Mensuelle (1-month pass). You have to choose at least two of the contiguous “zones” : Paris is first the zone 1, La Défense is in the third zone, Versailles in the fourth,… Everything related to a “Navigo” pass is in purple (eg. the target for the pass in the turnstiles).

Although not as good a deal for adults in most cases as the Mobilis or Carte Orange, there are also 1 to 5 day tourist passes, called Paris Visite available, which are a bargain for kids of ages 4 to 11, starting at €4.40 per day for travel within zones 1-3.

When using the metro in Paris, keep your métro ticket or pass with you at all times, you may be checked or “controlled”. You will be cited and forced to pay on the spot. The most likely spots for controls are just behind the turnstiles at big métro stations or during métro line changes “correspondences”. It is rather uncommon for “controleurs” to check tickets on trains. RATP agents may be present in the metro stations even on Sunday night.

How do you get Paris metro tickets?

Be advised too that books of ten paper tickets (the famous T+ tickets) will disappear progressively from the vending machines from 14 October 2021.

Some larger stations have secondary entrances where there is no ticket booth. These are labelled voyageurs avec billets (“passengers with tickets”).

Each station displays a detailed map of the surrounding area with a street list and the location of buildings (monuments, schools, places of worship etc) as well as exits for that particular metro. Maps are located on the platform if the station has several exits or near the exit if there is only one.

Using the metro in Paris

When the train arrives, the doors may not open automatically. In such a case, there are handles located both inside and outside the train which you have to push, or unlatch in order to open the door.

While all of this information regarding using the metro in Paris may seem overwhelming, it is incredibly easy to get into the swing of things when you arrive. Make sure to bookmark this blog so you can refer back to it before you land in Paris and use it as your handy local transportation Paris guide – and you will be good to go!