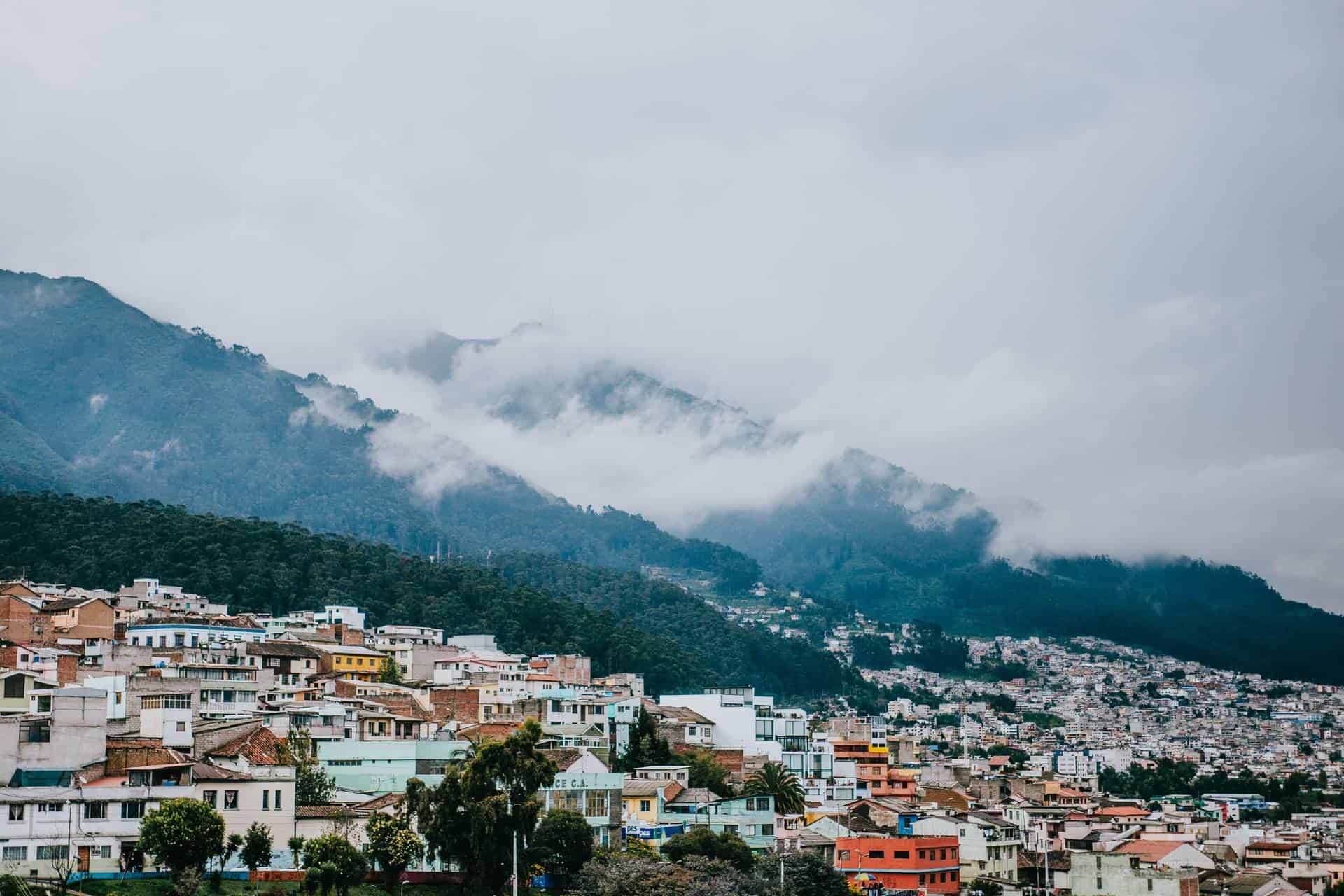 Among all of the cities that claim to be the center of the world, Quito is the one with the most arguments to affirm this.

Geographically it is in the middle of the planet, it’s latitude 0-0-0, this has been confirmed by the Geodesic French Expedition of 1736.

This little metropolis tries to continue the development of a mixture of races that has been cooking for hundreds of years, adding ingredients of the world in it’s daily life.

Quito is the second largest city in Ecuador with a population of more than two million people. It is south of the Equinox, at the feet of the Atacazo mountains and the Guagua Pichinca and Rucu Pichincam volcanoes.

Visiting Quito: What to expect

We arrived in Quito on Sunday and the first thing we noticed was the strong presence of the mountains in the city. The first time we went for a walk in the Old Town we ended up very tired because it consists mainly of up and downhill roads. The Old Town (known in spanish as Centro Histórico, which means Historic Center), is one of the best preserved barrios in Latin America. In 1978 it was the first city declared as Cultural Heritage of Manknid by UNESCO, due to its historic value.

The Old Town has many churches, many of which are made out of gold inside with the exception of the Cathedral. The weather treated us fairly well, considering that we came from Bogotá. The mornings were sunny and the afternoons were rainy, therefore, our activities took place during the day and we worked on the videos in the evenings.

Some highlights of Quito Old Town include:

We spent most of our nights in a barrio called La Mariscal, where most of Quito’s nightlife happens. Here, Quiteños, tourists, backpackers, and Costeños (people from the coasts of Ecuador) all come together in bars, karaokes, discos and salsa clubs.

At these parties we discovered Quito’s hospitality and kindness, most people are easy to talk to and like having conversations. We would love to show you some pictures, but since we don’t party with cameras, we’ll leave it to your imagination.

We became a little bit obsessed with the Ecuadorian ‘menestras’. This is a very simple and delicious recipe: meat, rice, beans, and fried bananas. Speaking about bananas, we learned something here in Ecuador, you can eat bananas with everything, sugar, salt, dinner, and as an appetizer.

Another thing that also impressed us was the bread. Having a French person on our team, we feel we have the right to say that we have high standards in this particular area but we really feel that they have great bread in Quito.

In Ecuador, every year at the end of February / beginning of March many small towns celebrate Carnaval. Many of Quito’s inhabitants leave the city to go to these small towns for Carnaval in quest for some distraction. Some go to Montalvo, others to Guaranda. We went for one afternoon to Guaranda along with José a young “Quiteño”. During the day all kinds of parades are happening all over town, and at night concerts are in full bloom.

Carnaval is full of traditions and symbolism. This symbolism is reflected in many games and activities people are playing. For example, water represents purification and this is why during the festivities people throw water onto each other and themselves. One can walk quietly on the street heading to the main plaza and suddenly be attacked by water balloons. Another example, as we were on the road riding in the back of a pickup truck we were doused with water each time passed a bridge because people waited there to spray us from above. We were completely soaked by the end of the festival; Joanna even had eggs, foam, and flour on her.

Take a walking tour through Quito

A recommended walking tour when visiting Quito that could enhance your vision of the Historic Center is as follows:

This itinerary follows a chronological and logical sequence of sites. Most people do it backwards, turning La Ronda and Museo de la Ciudad as distant points where you’re usually worn out by the time you get there. In any event, the Historic Center is so vast that you need more than one visit to see it all. The recommended walk provides you with a good overview if you’re short of time or want to see as much as possible on a first day.

Visiting Quito was a major highlight on our tour of Ecuador.

Thinking about doing something a bit more adventurous when in Ecuador? Why not go climb Chimborazo, just four hours from Quito.

Tipping in Colombia: Know Before You Go