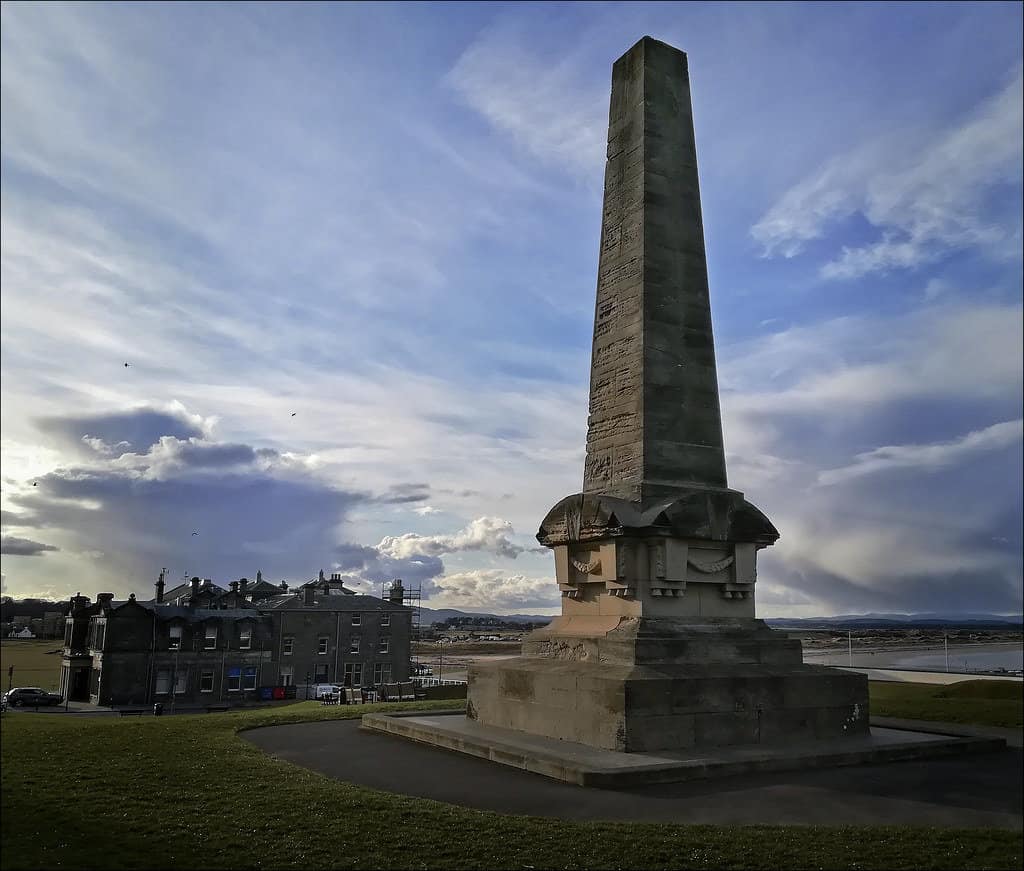 There have been a few Martyrs Monument fundraising campaigns. But why is it important to maintain and restore this historical St Andrews landmark?

This obelisk is probably most often seen in the background in pictures of the Royal and Ancients Clubhouse. It dates from 1842-3 and was designed by William Nixon. At over ten metres tall, it really stands out against the landscape.

A famous St Andrews landmark, the Martyrs’ Monument often featured on nineteenth century postcards and guidebooks like in the second picture.

History of the Martyrs Monument in St Andrews

So why would we be so concerned about its upkeep? Because it represents a hugely important aspect of the history of St Andrews: the Scottish Reformation. Who are we meant to be remembering when we look at the Martyrs’ Monument? Here’s the ‘who, why and how’ of the four Protestants killed for their beliefs in the thirty-five years leading up to the Scottish Reformation.

Patrick Hamilton was an outspoken Scottish nobleman and the first Protestant martyr to be executed in St Andrews, in 1528. While studying in continental Europe, he was influenced by the teachings of Martin Luther who had broken away from the Catholic Church just a few years earlier.  When he returned to study – and later teach – at St Andrews University, his Protestant teachings caught the attention of the Archbishop James Beaton. Patrick Hamilton escaped to Europe in early 1527 after a warrant for his arrest and trail had been issued, but he returned about six months later to live and preach in Linlithgow. He began to settle there, and even married a local noblewoman.

Sadly Hamilton returned to St Andrews in early 1528 to meet with Archbisop Beaton and while here, he was arrested, tried, and burned at the stake outside St Salvator’s Chapel.  He was only twenty-four. It is said that he burned for six hours, and that he died so bravely that Archbishop started to discourage public executions because “the reek of Maister Patrik Hammyltoun has infected as many as it blew upon.”

Patrick Hamilton’s initials can be found in the cobblestones on North Street, marking the spot where he died.  Superstitious St Andrews University students will walk deliberately around the initials, as legend has it that those who tread on them will fail their final exams.

Henry Forrest is a less well-known martyr, but he was executed in 1533 for speaking out against the killing of Patrick Hamilton.  Archbishop Beaton would probably have said that Henry Forrest was one of those good Catholics who were ‘infected’ by Patrick Hamilton’s “reek”. Forrest had been a Benedictine monk and priest, but the Catholic church ceremonially stripped him of both roles when they discovered that Forrest had recently been reading the New Testament in English. In the mostly illiterate and highly uneducated 1500s, this in itself was considered dangerous enough to be punishable by death and Henry Forrest was burned at the highest point in St Andrews, just outside the North end of the Cathedral.

George Wishart was thirty-three when he was martyred outside St Andrews Castle, also by order of David Beaton, who had recently been made a Catholic Cardinal. Just like Patrick Hamilton, George Wishart had been influenced by Protestants like Martin Luther and also John Calvin while studying in Europe. He spent time in Cambridge before returning to Scotland to spend two years travelling Scotland preaching against the Catholic church, and promoting Protestant beliefs. Reformer John Knox – whose preaching in Holy Trinity Church, St Andrews, provoked the riots that destroyed the Cathedral – was one of Wishart’s followers. Wishart was finally arrested in December 1545 and then martyred in March 1546. Depending who you read, George Wishart either prophesied or ordered Cardinal Beaton’s assassination while he was dying; either way, Beaton was murdered less than three months later. You can find George Wishart’s initials set in stone into the road overlooking Castle Sands, marking the spot where he was burned.

Walter Milne (or Myln) was the last of the Scottish Protestant martyrs, and quite different to the other three. He was 83 years old when he was executed outside Deans Court. Earlier in his life, he left the Catholic Priesthood in order to be free to marry, and it’s thought he was burned at the stake due because he believed that Catholic priests should be allowed to get married if they wanted. He was particularly unlucky because Scotland officially became Presbyterian Protestant just two years later, in 1560.

Interested in this history? Why not join a St Andrews, Golf History tour? The tour starts at Martyrs Monument and visits a few sites that have been frequented by golfing giants.

Find out more about the UK with Travel Dudes.

Your Guide for Visiting Dubrovnik, Croatia!

Top Spots for Camping in Ireland

How To Travel For Free Or Almost Nothing

Guide to Experiencing the Best of Christmas Around the World