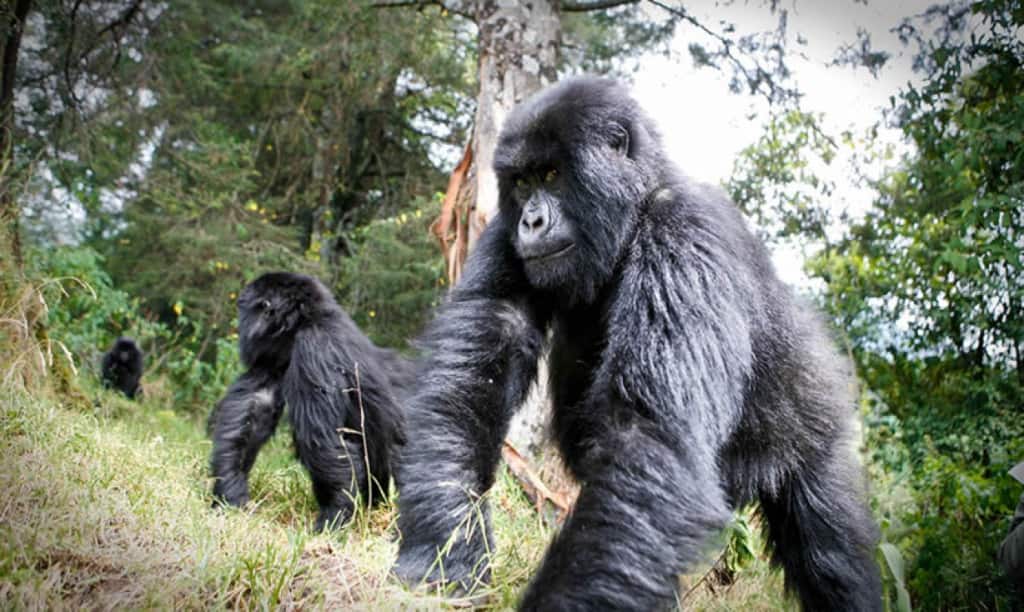 Responsible tourism around mountain gorillas comprises of conservation, preservation, maintenance and the protection of wildlife and their habitat.

Promoting this kind of practice in Africa’s jungles, where these tremendous primates are kept, will in turn help to increase not only their population but also other wildlife species in the wild.

Around the 1970s, there were only 400 mountain gorillas in the whole world. Because of escalated interest in the conservation and gorilla tourism in the 1980s and 1990s, an increase in population of these critically endangered species was realized and currently, there are nearly 900 that are protected in the jungles of Bwindi Impenetrable Forest and Mgahinga Gorilla National Park in Uganda, Volcanoes National Park in Rwanda and Virunga National Park in Democratic Republic of Congo (DRC).

The increase in the mountain gorilla’s population is an indicator that responsible tourism plays an important role in the conservation and protection of these critically endangered species and their habitat.

Gorilla tracking has not only become an important fund raising tool, in Uganda gorilla tourism contributes nearly 80% of the national wildlife authority’s general budget which also funds most of the country’s wildlife and habitat conservation throughout the year.

Today, mountain gorillas have become a valuable commodity in many local communities around national parks and governments at large. These humble creatures offer a lot more required financing for local infrastructure and job creation not only on a local level but also a national level as well as boosting the countries’ tourism sector. It is this revenue that governments raise from sustainable or responsible gorilla tourism in either Uganda or Rwanda that is used to finance various conservation projects such as anti poaching patrols and critically it makes the local communities to get aware of the economic value of that is derived from these world’s endemic species.

It is also one way that trekkers and other travelers around the world show off their passion, dedication and above all act as vocal advocates of conservation of world’s critically endangered species in their home countries.

Whereas a typical trekker’s major goal is to view mountain gorillas in the wild, in most cases they also end up traveling to more other national parks or exciting attractions in and around the region. Tourism has turned out to be the main player of national economy in respective countries. The Rwanda Development Board revenue has nearly doubled for the past 5 years and tourism accounts for 7.8% of the country’s GDP. The World Wildlife Fund (WWF) on the other hand estimated that every mountain gorilla generates $1 million in Uganda annual revenue based on the fact that these primates are not killed in the course of the year.

The trackers had seen the wire snare covered around this young primate’s arms when they visited the gorilla family with visitors the day before. The operation on Kajeyo was successful unlike other mountain gorillas that rarely survive snare injuries. In the previous years, there were over 1200 snares that were and destroyed in the Volcanoes National Park in Rwanda and this still remains as a main threat to these creatures.

Political unrest is another critical factor. Gorilla Trekking Tours in Uganda and Rwanda tours are unstable unlike DRC where political instability has inflicted not only gorillas and their habitats but also the local communities that have been displaced while others have lost their lives.

Health risk and growth rate for the gorillas

Also, health risk to these tremendous species has escalated due to increasing gorilla tourism. Mountain gorillas share nearly 98% of their genes with humans making them the most susceptible creatures to most of human infectious diseases. However, there are strict gorilla trekking rules and regulations which include, among others, a minimum distance of 7 meters and restrain any visitor from trekking these endangered species especially if such a person has transmittable illness. At times certain situations are unavoidable say for instance a gorilla approaches a tourist and gets in contact, you may be asked to step back but at that moment you won’t run away from contact.

Climate change has also continued impacting on the growth of these remarkable species since many farmers look for land at higher altitudes and this threatens the gorilla habitat. It is estimated that the growing conditions for specific crops after century will have increased to nearly 700 meters in altitude which indicates that there will be more demand for land on higher mountainous slopes of Bwindi or Virunga.

In conclusion, the survival of mountain gorillas is a significantly critical factor for both local and national economies. The threats that impact on the survival of these species in the world are ever on increase and the only way to save them from extinction is through responsible gorilla tourism.

At the end, respective national parks will also be well protected and many wildlife safari dwellers can be attracted into the destination to enjoy authentic experiences in African wilderness.

Though gorillas stand as one of the world’s strongest and mightiest creatures, they are vulnerable to poaching just like any other form of wildlife.

They have become so vulnerable despite ongoing attempts to protect them that protections have been stepped up further by the government, regional bodies and Non Governmental Organisations just Gorilla Doctors, Dian Fossey Gorilla Fund and others.

Where Mountain Gorillas are Found

Though their numbers are reported to be increasing, challenges that can continuously reduce the number of these great apes still exist. This, therefore, calls for a deeper look into gorilla poaching, an activity that currently destroys these breathtakingly wonderful animals that are only found in Uganda, the Democratic Republic of Congo and Rwanda.

The endangered mountain gorilla population could be in for a boost and a census has been set to reveal that many are left in the Virunga massif which is an area that spans Uganda, Rwanda and the Democratic Republic of Congo. Today, less the 500 mountain gorillas appear to be left in the Virunga Massif according to  the recent survey however the  conservation efforts are taking effect because their population was estimated at 480 after a census in 2010 and a second population of around 400 mountain gorillas live in Uganda’s Bwindi Impenetrable national park.

It should be noted that safeguarding the gorillas’ survival is very essential though the exploitation of the land for agriculture and the timber trade has devastated the habitat, while new roads built for timber trucks have made it easier for poachers to reach the gorillas.

Patrols have been organized between each of the three countries and meet to exchange information about the endangered mountain gorillas however another threat looming in Virunga national park in the DRC is the threat of oil exploitation.  Today the park is a UNESCO world heritage site, but, if the Congolese government goes ahead with oil plans, the park could lose its status. There will be an impact on gorillas because more than seventy (70%) of the park will be affected.

Reasons Why You Must Add South Africa To Your Travel Bucketlist