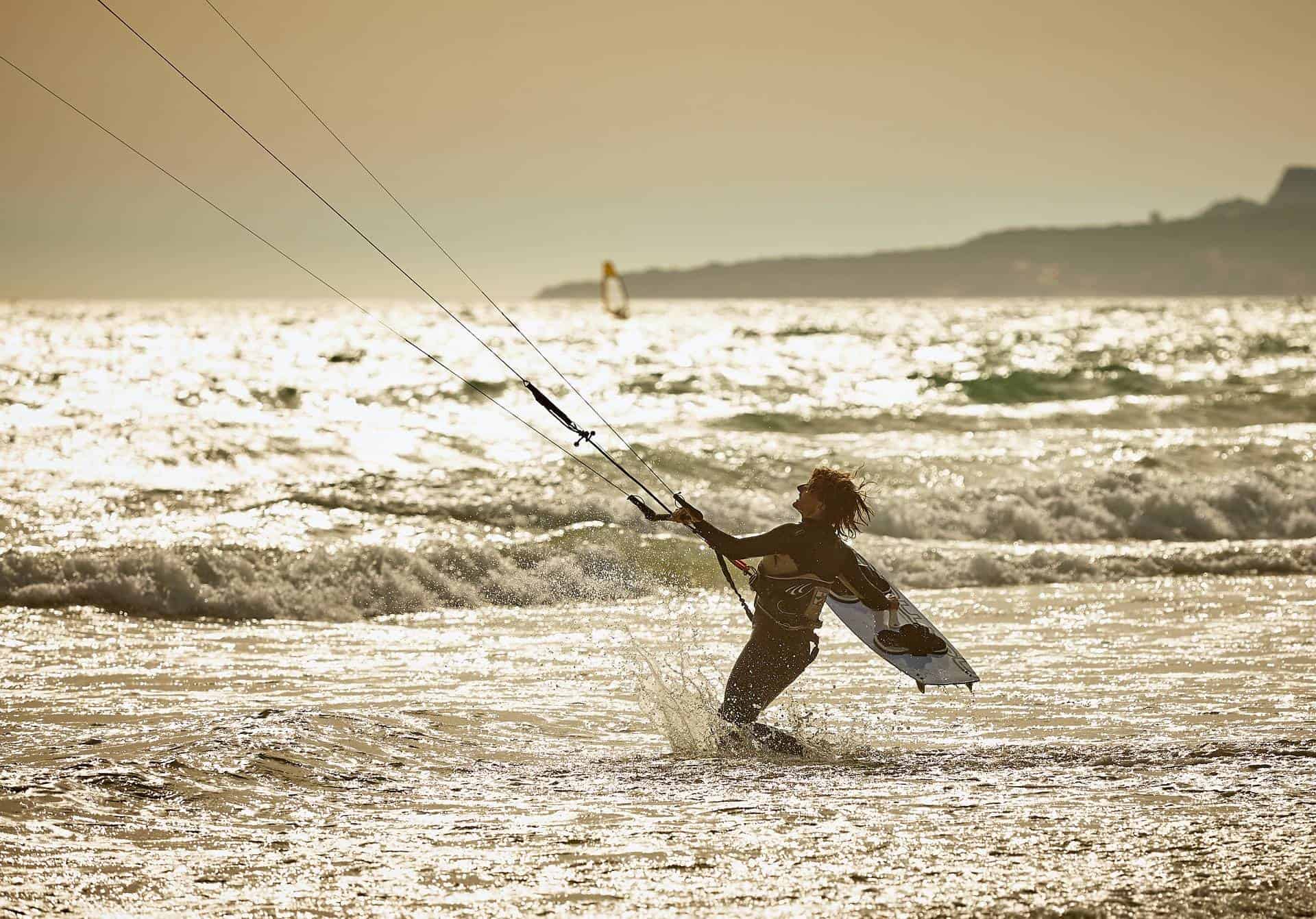 Tarifa is in the province of Cadiz in the Andalucia region of Spain. It is located on the southernmost point of the European continent, only 14 km from the coasts of North Africa.

Known throughout the world as a Mecca for windsurfing this charming white Andalusian town has only been mildly spoiled by the mass touristic developments which have ravaged the coasts of most of Spain. Much of the surrounding coastline is still protected by Spanish law and a few kilometres to the west of the town are two of Spain’s most beautiful beaches. Strong winds and good waves make Tarifa an attractive spot for water and wind sports.

Watersports is one of the major things to do in Tarifa – with windsurfing and kitesurfing in Tarifa being the most popular.

Check out our post on the best sunglasses for watersports.

Things to do in Tarifa

The best combination of services and wind, Tarifa is well known as a test center or training place for most of the brands and pro riders, but is good to for beginners too, you will find windsurf centers from Los Lances beach to Valdevaqueros and Bolonia, depending on the wind direction you will have to choose the one that suits better your level, the conditions can vary from 3 kms distances so ask the locals, the will friendly recommend the best spot for the day.

Most of the centers open from March to October but you will find some, like the Surf Center in Hotel Arte Vida, that open all year around. Some days windsurfing in Tarifa can become unforgettable for you, cruising in the Strait of Gibraltar waters, with such beautiful views of the African Continent, thinking in the history of this channel and even feeling the magical environment and ambient, mix of African-Flamenco fusions… I Promise you will become an addict of this town, well known is that from that day you always want to come back.

Tarifa is for sure the best spot in Europe for practicing kitesurfing, the mix of good winds, kilometers of perfect beaches and a full service of professional schools and rental centers makes Tarifa that place, from flat waters for beginners or freestylers to waves for kitesurfing addicts, everybody is suited in this waters just choose your spot.

From Tarifa town to Caños de Meca you will find a beautiful spot that suits your needs, but only in Tarifa Shops using the take away service or closer spots like Dos Mares, Arte Vida, or Valdevaqueros where you will find Centers with all the services you can need. You can even find places with kindergarten service.

Kitesurfing in Tarifa is definitely a must do if you’re visiting!

The fascinating experience of navigating the Strait of Gibraltar gains an emotional highlight, when the lovable inhabitants of these waters, whales and dolphins, approach our boats to show themselves and by doing so satisfy the curiosity of the tourists.

Whale Watching in Tarifa has become a tourist activity with an educational and a research background. The effect of the latter is to minimize the impact on the environment and to maximize the protection of the natural surroundings and the species, using visitors experience as tool for conscientiousness process.

Marine biologists go along with tourists to research statistics and data about these animals and their habitat, useful for scientific projects and publishing. You can film and photograph the unforgettable encounters with dolphins and pilot whales looking at the tourists, the orca mother with her young calves around the fisherman’s boats trying to catch a bite of the red tuna, the fin whales (the second largest animal in the world) causing a huge blow on the surface, and the sperm whale waving goodbye to the tourists, showing their huge tails, looking out of the water like an obelisk in the sea.

Food is generally good in Tarifa – especially fish. Try going to the places filled with locals. They are generally easy to pick out from tourists (both Spanish and foreign). Some of the best places in Tarifa also happen to be the cheapest.

Don’t forget to try the local Tuna, swordfish and, especially, the “Tortillas de camarón“, typical of the coast of Cadiz. “Ortigas” (sea nettles) are another local specialty. The best restaurant in the old city is called Mandragora, located on Independencia (a small alleyway between the city wall and the Cathedral). It is not cheap, but the food was the best we had in Spain, and it is filled with locals.

Head north along the very long beach, best to take a car for it… 🙂 There you’ll find a huge dune, which is fun to climb and you’ll get a fantastic view from up there!